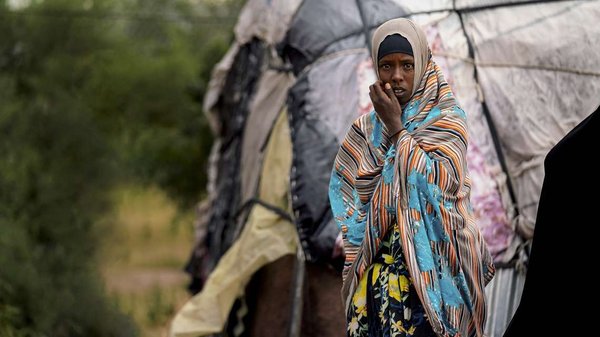 Ilhan's family now lives from growing fruit and vegetables. Weather extremes left the former shepherd family in the Awdal region of northwest Somaliland no choice but to settle down.
© Wuchenauer/Welthungerhilfe

In many countries where climate change or armed conflicts threaten people’s livelihoods, the impacts of the COVID-19 pandemic are making a bad situation worse. At the Berlin launch of its Annual Report in early July, Welthungerhilfe warned that as a result, the number of people suffering from hunger worldwide may rise to over a billion.

70-100 million more people falling into extreme poverty by the end of the year and living on less than 1.90 US dollars a day; 400 million full-time jobs lost by the end of the year; over one billion people worldwide suffering from hunger: these were the far from encouraging figures quoted by Marlehn Thieme, President of Welthungerhilfe, in Berlin, Germany, in early July to describe the predicted impacts of the COVID-19 pandemic.

“The coronavirus acts as an accelerant”

“The coronavirus pandemic acts as an accelerant for pre-existing crises,” she said at the launch of her organisation’s Annual Report. People are losing their jobs, their incomes, their ability to build reserves. Entire infrastructures are collapsing. Countries are also weakened by the decline in remittances, a vital source of livelihood support for many families. According to estimates from the World Bank, remittances to the developing countries will fall by 20 per cent.

“The situation of the poorest will become noticeably worse”

And as always in times of crisis, the consequences will be particularly devastating for the poorest: the smallholders who already suffer disproportionately from the impacts of climate change; the millions of people fleeing from wars and conflicts in countries like Yemen, Syria and South Sudan, who already rely on humanitarian aid. For Welthungerhilfe’s President, the surge in food prices is especially worrying, as people then reduce their food intake and eat cheaper, less nutritious foods. “For the world’s most impoverished people, there is even worse to come this year,” she said. Sub-Saharan Africa will be particularly affected.

This was confirmed by Kelvin Shingles, Welthungerhilfe Country Director for Kenya. According to the Global Hunger Index, Kenya’s level of hunger is “serious ”: 29 per cent of the population is undernourished and 60 per cent of households live below the poverty line. While the country is still recovering from the droughts of 2017 and 2019, farmers had to contend with severe flooding and landslides in April and May this year. Added to this are locusts, which destroyed 45,000 hectares of livestock area in Marsabit County in the north of the country and 100,000 hectares of pasture and 4,500 hectares of cropland in neighbouring Turkana County.

And there is now the coronavirus. Out of the 47 counties, 41 are affected by COVID-19, according to the Country Director. The impacts are mainly felt in informal settlements, where many people live from hand to mouth. Tourism – a key sector of the Kenyan economy – is almost at a standstill as a result of lockdown. Agriculture, which accounts for 20 per cent of GDP and employs 40 per cent of the population, is also disproportionately affected by the pandemic. Getting food to market is difficult because supply chains are disrupted. Only around 25 per cent of livestock markets are operational. The country’s maize stocks have shrunk by 25 per cent while, simultaneously, prices of this staple food have risen by almost a quarter. The government plans to import two billion bags of maize, but this will only meet the population’s needs for two months. “We expect the situation to deteriorate over the months to come,” said Kelvin Shingles.

In 2019, Welthungerhilfe supported around 10.5 million people with 499 projects in 36 countries. It had 249.4 million euros to spend; this includes just under 190 million euros from public grants. Africa is its main area of work, followed by Asia and the South America/Pacific region. South Sudan, Sudan and Syria/Turkey received the largest amount of project support in 2019.

Since it was founded in 1962, Welthungerhilfe has provided approximately 3.95 billion euros in funding for 9,830 overseas projects, according to the organisation’s own figures.