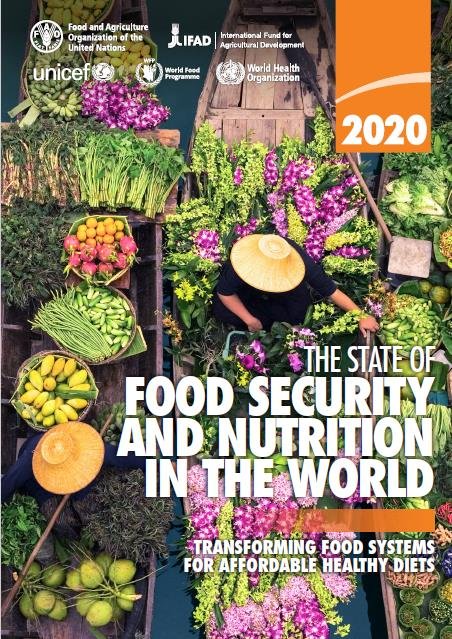 State of Food Security and Nutrition in the World 2020

Tens of millions have joined the ranks of the chronically undernourished over the past five years, and countries around the world continue to struggle with multiple forms of malnutrition, this report states.

More people are going hungry, according to the latest edition of the State of Food Security and Nutrition in the World, published in July 2020 by the United Nations. Thus, the world is still off track to achieve the goal of ending hunger, food insecurity and all forms of malnutrition by 2030.

The report estimates that almost 690 million people went hungry in 2019 - up by 10 million from 2018, and by nearly 60 million in five years. High costs and low affordability also mean billions cannot eat healthily or nutritiously. The hungry are most numerous in Asia, but expanding fastest in Africa. Across the planet, the report forecasts, the COVID-19 pandemic could tip over 130 million more people into chronic hunger by the end of 2020. (Flare-ups of acute hunger in the pandemic context may see this number escalate further at times.)

The State of Food Security and Nutrition in the World is the most authoritative global study tracking progress towards ending hunger and malnutrition. It is produced jointly by the Food and Agriculture Organization of the United Nations (FAO), the International Fund for Agricultural Development (IFAD), the United Nations Children's Fund (UNICEF), the UN World Food Programme (WFP) and the World Health Organization (WHO).

In this edition, critical data updates for China and other populous countries have led to a substantial cut in estimates of the global number of hungry people, to the current 690 million. Nevertheless, there has been no change in the trend. Revising the entire hunger series back to the year 2000 yields the same conclusion: after steadily diminishing for decades, chronic hunger slowly began to rise in 2014 and continues to do so.

Asia remains home to the greatest number of undernourished (381 million). Africa is second (250 million), followed by Latin America and the Caribbean (48 million). The global prevalence of undernourishment - or overall percentage of hungry people - has changed little at 8.9 per cent, but the absolute numbers have been rising since 2014. This means that over the last five years, hunger has grown in step with the global population.

This, in turn, hides great regional disparities: in percentage terms, Africa is the hardest hit region and becoming more so, with 19.1 per cent of its people undernourished. This is more than double the rate in Asia (8.3 per cent) and in Latin America and the Caribbean (7.4 per cent). On current trends, by 2030, Africa will be home to more than half of the world's chronically hungry.

As progress in fighting hunger stalls, the COVID-19 pandemic is intensifying the vulnerabilities and inadequacies of global food systems - understood as all the activities and processes affecting the production, distribution and consumption of food. While it is too soon to assess the full impact of the lockdowns and other containment measures, the report estimates that at a minimum, another 83 million people, and possibly as many as 132 million, may go hungry in 2020 as a result of the economic recession triggered by COVID-19.