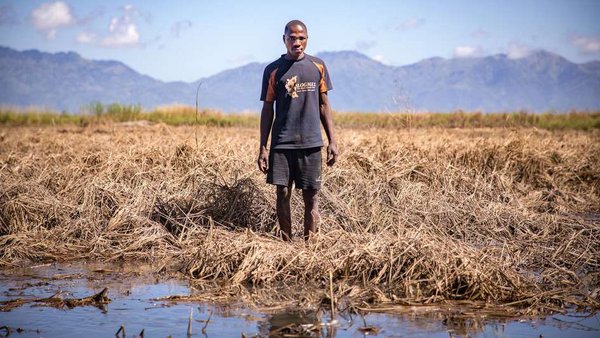 Patrick Ghembo of Monyo Village, Malawi, standing in his field, which was destroyed by cyclone Idai in March 2019.
Photo: © Gavin Douglas/Concern Worldwide

The progress made in the global fight against hunger is severely endangered. In countries that are already affected by hunger and poverty climate change is worsening the nutrition situation. This is the conclusion to be drawn from the Global Hunger Index, presented by Welthungerhilfe on the occasion of World Food Day.

If progress in reducing undernourishment continues at the current pace, some 45 countries will fail to achieve the Sustainable Development Goal 2 of zero hunger (or at least a low level of hunger) by 2030. This is one result of this year’s Global Hunger Index (GHI) published annually by the NGOs Welthungerhilfe and Concern Worldwide to mark World Food Day on 16 October.

The Global Hunger Index 2019 calculates the nutrition situation in 117 countries. The result: 822 million people are suffering from hunger around the world; after years of decline, the number has been rising again over the last three years, from 785 million in 2015. In addition, some two billion people  are suffering from malnutrition. On the one hand, the GHI has fallen by 31% since 2000, and there are 14 countries which have significantly improved their scores in this period, including Angola, Ethiopia, Laos and Rwanda. On the other hand, nine countries (including Central African Republic, Lebanon, Yemen and Venezuela) are showing GHI scores that are higher than in 2000.

Progress is being rolled back

‘We aren’t making enough progress in reducing hunger,’ complained Klaus von Grebmer, Strategic Advisor of the International Food Policy Research Institute (IFPRI), at the presentation of the GHI in mid October in Berlin. Besides bad governance, conflicts and crises, he listed climate change as a key reason. The report showed that since the early 1990s the number of extreme weather events such as droughts, storms, floods and wildfires had doubled – events which directly impact the basis for living and survival of people in the Global South.

This involves not only destruction of harvests but also loss of livestock due to drought or the deterioration in the nutritional value of plants as a result of adverse growing conditions. Rice, for example, which is the basic foodstuff for half the world’s population, is extremely sensitive to variations in temperature or soil salt content. In key cultivation areas such as the Mekong delta, the effects of climate change could quickly have an adverse effect on the nutritional situation of large sectors of the population, the report warns. ‘Climate change is rolling back the progress we’ve achieved globally in the past few years,’ according to Welthungerhilfe president Marlehn Thieme. ‘Our studies clearly show that countries with a higher GHI are more vulnerable to the effects of climate change. At the same time, they have the least ability to make provision for these.’

One example is Niger. The west African country ranked last of 189 countries in the Human Development Index, ranked 101st of 117 countries in the GHI, and its hunger situation is rated ‘serious’ with an index of 30.2. ‘20 years ago, the hunger situation was still “alarming”,’ noted Welthungerhilfe’s Country Director in Niger, Francis Djomeda. However, the erratic success is at risk in his country as well. The rainy season today begins later than it used to, and lasts only 2.5 months instead of four months, the period of hunger has extended from its former three months to six. Harvests are no longer sufficient to bridge this gap. As a result, families eat only once a day, instead of three times. They are often forced to eat the seed intended for the coming season.

At the same time, there is an increase in the number of floods. This results not only in the loss of houses, fields and animals, but also causes more animal epidemics and diseases, for example malaria and cholera. Many people give up farming or emigrate. The existing conflict between farmers and nomads in the struggle over scarce resources is exacerbated by internal migration, not to mention the vast flows of refugees from the neighbouring countries Burkina Faso, Mali, Nigeria and Chad, where people are fleeing from violent conflicts. More and more people are having to share increasingly scarce resources.

To improve the resilience of those affected, adjustments are required (such as drought-resistant seed and protection of riverbeds and irrigation systems). as well as early warning systems. However, current measures at global level are totally insufficient, the Welfhungerhilfe president warned. She appealed to the international community of nations to give priority in funding to climate change adaptation and mitigation to the least developed countries (LDCs). This funding should be in addition to Official Development Assistance.