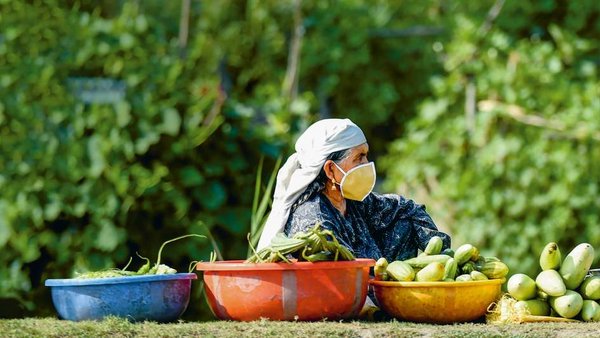 'Linking health and food systems' is the motto of GHI 2020. Cover photo of the report.
Photo: Tauseef Mustafa/AFP

The world is not on track to achieve the second Sustainable Development Goal – Zero Hunger. At the current pace, approximately 37 countries will fail even to reach low levels of hunger by 2030. This is demonstrated by the Global Hunger Index 2020, presented by Welthungerhilfe on the occasion of World Food Day.

World-wide, more than 690 million people are suffering chronic hunger. 135 million people are in an acute food crisis. Owing to the corona pandemic, this number could rise by a further 80-130 million people. “The world is not on track to achieve zero hunger by 2030,” said Welthungerhilfe General Secretary Mathias Mogge, presenting the Global Hunger Index (GHI) 2020 in Berlin Germany. The GHI is brought out annually by Deutsche Welthungerhilfe and Concern Worldwide, in the run-up to World Hunger Day, the 16th October.

Already today, people in 45 countries world-wide depend on food aid. Welthungerhilfe all the more welcomes the award of this year’s Nobel Peace Prize to the World Food Programme, which, it maintains, shows how closely connected struggling for peace and combating hunger are connected.

“There is no longer any recovery between disasters”

The hunger situation in Africa South of the Sahara and South Asia continues to be particularly severe. At 21.2 per cent, sub-Saharan Africa has the highest rate of undernourished people, and a total of 230 million individuals are affected. Moreover, this is the region with the highest child mortality rate world-wide (7.8 %). South Asia also gives rise for concern. Here, a total of 235 million – that is 13.4 per cent of the population – are affected. Moreover, this region shows the highest rate of wasting among children.

After many years of declining hunger levels, numbers world-wide have on the rise again for five years in succession. Today, 14 more countries show higher hunger values than in 2012. In addition to insufficient health systems, wars and conflicts, it is above all the impact of climate change which has nullified progress made in combating hunger, as Welthungerhilfe President Marlehn Thieme stressed. For example, Sudan suffered its worst floods for three decades this year; in the Sahel Zone, which previously had to cope with two floods a year, eight floods a year have become the rule since 2000. Added to this are droughts, cyclones and devastating locust plagues. “There is no longer any recovery between the disasters,” Thieme noted, citing Welthungerhilfe’s Country Director for Ethiopia.

However, there are positive developments, too. Whereas the average world-wide hunger level was still at serious in 2000, it is now at moderate. Thieme explained that progress had been made for example in Angola, Sierra Leone and Ethiopia, where the hunger situation had still been extremely alarming 2000 and was now graded as moderate. The cause-and-effect mechanisms seem obvious. In Angola and Sierra Leone, civil wars were ended, while Ethiopia has established a comprehensive social security system – a system of the kind that 55 per cent of the global population cannot resort to.

According to Welthungerhilfe, in order to reverse current trends, global food systems, which are “not fair, not sustainable and not resilient”, have to be addressed. It says that they are responsible for around a third of global greenhouse gas emissions, 70 per cent of freshwater consumption and – increasingly again in recent times – massive rainforest clearing. New technologies for more natural resource-friendly cultivation methods, sensitising people to the significance of natural resources, improved storage conditions for agricultural products, better access to markets, food counselling above all for pregnant women and mothers, and developing sanitation all comprise aspects that have to be tackled to achieve the goal of zero hunger by 2030.