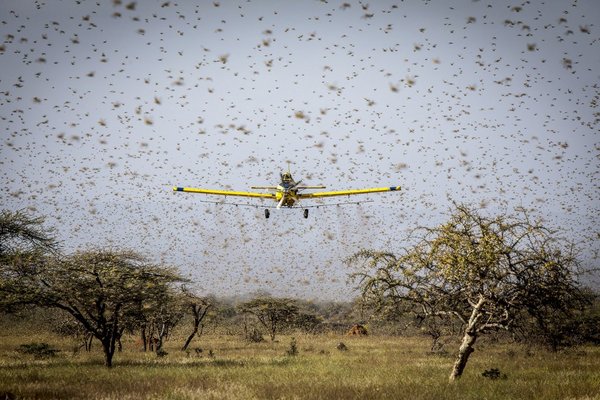 An airplane during the aerial spraying campaign to fight locusts in Kenya, January 2020.
Photo: ©FAO/Sven Torfinn

Desert Locusts swarms have rapidly spread across East African countries during the last weeks. Urgent action is essential before the next generation becomes airborne, FAO warns.

“Scourge of biblical proportions” was the depiction of the current Desert Locust outbreak in East Africa given in a joint statement by QU Dongyu, Director-General of the Food and Agriculture Organization of the United Nations (FAO), Mark Lowcock, United Nations Under-Secretary-General for Humanitarian Affairs and Emergency Relief Coordinator and David Beasley, Executive Director of the United Nations World Food Programme (WFP) at the end of February 2020.

The locust swarms have moved rapidly across vast distances during the last weeks and the full extent of their massive scale has become clear. Swarms have been sighted in Djibouti, Eritrea, South Sudan, Uganda and Tanzania.

Last week, a swarm crossed into one of Africa's most food-insecure and fragile countries, South Sudan. Just this week, it was confirmed that one swarm reached the eastern boundaries of the Democratic Republic of the Congo - a country that has not seen a locust incursion since 1944.

Cost of action has already doubled

On 20 January, FAO called for USD 76 million to help combat this pest crisis. But the resources to control the outbreak have been too slow in coming. As the locusts continue their invasion throughout eastern Africa and more details emerge about the scale of need in affected areas, the cost of action has already doubled, to USD 138 million.

This funding will ensure that activities to control the locusts can take place before new swarms emerge. It will also provide help for people whose crops or pastures are already affected, to protect their families and their livelihoods.

Only a few week until the next generation take wing

Desert Locusts have a reproduction cycle of three months. Today, mature swarms are laying eggs within vast areas of Ethiopia, Kenya and Somalia, many of which are already hatching. In just a few weeks, the next generation of the pests will transition from their juvenile stage and take wing in a renewed frenzy of destructive swarm activity. This will be just as farmers' crops begin to sprout. The next wave of locusts could devastate East Africa's most important crop of the year, right when it is at its most vulnerable.

Thus, anticipatory action to control and contain the locusts before the new swarms take flight and farmers crops first break soil is critical. At the same time, resilience of affected communities must be enhanced so they can better withstand some inevitable shocks.