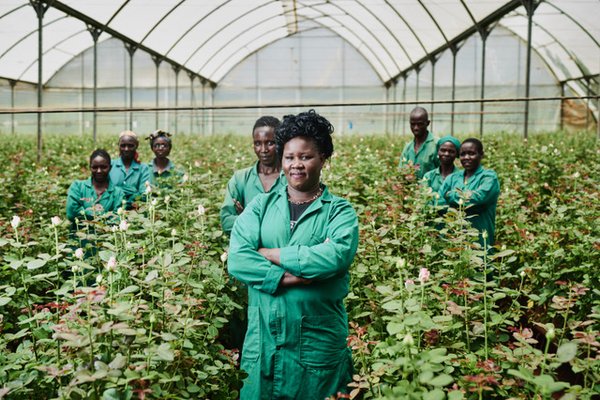 A Fairtrade certified farm in Kenya. These farms receive a Fairtrade Premium of 10 per cent for every stem sold. Photo: TransFair e.V./ Christoph Köstlin

Looking for blueprints for successful agriculture in Africa

What are the factors making agricultural investments in Africa a success ? And how can smallholder farmers benefit from investments so that they can earn a living income in the long run? These questions were addressed at the 8th German African Agribusiness Forum.

In spite of the political priority which the African agricultural sector has enjoyed in regional and national policies for years, agricultural productivity on the continent remains the lowest in the World. One of the reasons for this is a lack of investment. At their German-African Agribusiness Forum, which is traditionally held in January, the German-African Busines Association and the German Agribusiness Alliance looked at how investments can not only be generated but also put to use in a manner benefiting all stakeholders.

“Working together in partnership”

The DeveloPPP programme was presented as a best practice example of shared success. Introduced by the German Federal Government in 1999, this  funding programme is now active in more than 100 countries. Ventures run by businesses investing in a developing country or an emerging economy in the long term can be supported with up to two million euros. So far, 1.6 billion euros has been invested via this programme, with more than 60 per cent coming from the private sector, as Kathinka Kurz of Deutsche Gesellschaft für Internationale Zusammenarbeit (GIZ) reported. Up to now, more than 2,500 development partnerships have been implemented with it, with agriculture being one of the strongest sectors.

For example, via such a programme, Symrise AG, the Unilever corporation and GIZ are supporting vanilla production in Madagascar. In farmer field schools, the smallholders involved are trained in sustainable vanilla production, learning how to apply alternatives to slash-and-burn agriculture and soil-conserving cultivation methods. According to Symrise Advisor on Sustainability, Hamish Taylor, ingredients for business success include quality – in his case, higher quality vanilla beans which are rewarded with a price premium – as well as transparency and productivity. It was important to view farmers as partners, not as beneficiaries, and to treat them with respect and fairly. “Farmers do not need money given, they want to earn money,” Taylor stressed.

“Partnerships have to be conceived with a view to everyone benefiting from them,” added Dirk Voeste, Senior Vice President Regulatory, Sustainability & Public Affairs Agricultural Solutions at BASF. Voeste believes it is important to find local solutions and solutions which are scalable and transferable. He sees digitalisation as the driving factor of innovations, enabling farmers to have the right technology at the right point. For example, satellite data are used to inform farmers when a pest or disease is likely to appear; at the same time, the local retailers are informed so that they then have the approriate products availabe for the farmers. This all makes sense. However, as Sifiso Ntombela, chief economist at the National Agricultural Marketing Council (NAMC) in South Africa, noted, partnerships like those described by BASF are frequently collaborative schemes between governments and multinationals. “We often forget about local communities,” Ntombela pointed out. “This frequently results in a lack of trust in the solutions offered.”

There is probably less of such a danger among local social enterprises. One example is the Babban Gona company, which has set itself the task of combating food insecurity in Nigeria. In order to make farming more profitable for smallholders and above all more attractive for rural youth, it has opted for the elements of training and education, financial credit, agricultural input supply and support in harvesting and marketing. “Young people have no money to invest, so that all programmes have to be linked to a financing measure,” said Babban Gona CEO and founder Kola Masha. Via its network with different investment banks, Babban Gona lends money at commercial rates. When farmers repay their loan, they are paying for the services which they have received from the company. Members of Babban Ghona have tripled their farm size and doubled productivity, according to Masha, who points out that the most important aspect of his business is de-risking farmers.

De-risking is also behind the Hello Tractor success story. This company connects tractor owners to small-scale farmers by clustering demand among farmers and submitting it to tractor owners. Mobile and web applications are used in booking and fleet management. “The crucial aspect for the tractor owners is to have the machine fully booked the entire year,” said Hello Tractor founder Jehiel Oliver. In turn, the farmers can increase yields by planting and spraying in time. Mutual trust between service providers and users is established via village-based booking-agents. “We couldn’t work without them,” Oliver noted.

Frank Nordmann, General Manager Key Accounts and Sustainable Development at Germany’s Grimme Landmaschinenfabrik, which manufactures agricultural machinery, cautioned that just renting out equipment for land management was not enough. Storing food and transporting it to the cities, where the markets were, was a challenge of its own, and here too, farmers needed support, for example in the shape of cold storage.

Is certification the silver bullet?

The question remains how producers can achieve a reasonable price for their produce in order to finance possible investments. Can certifications help? To a certain degree, the participants in the discussion agreed. For even if farmers took part in the Fair Trade programme ensuring them a minimum price for their produce, “we still have a big gap regarding a living income”, Dieter Overath of Fair Trade Germany said. Retailers were the doorkeepers who could “convince consumers that we have to pay more for sustainability and social justice in food production”. But their price battles were having exactly the opposite effect. For example, when retailers Lidl decided to exclusively sell organic bananas, their rival reduced the price of its bananas so strongly that Lidl had to give up, as Overath reported. The concept did however work for flowers – here, the Rewe company was able to convince its customers that flowers were a high-quality product and doubling the price of Fair Trade flowers was reasonable.

The Supply Chain Law – a bone of contention

The sector had a critical opinion on the Supply Chain Law, which had been voted on in Germany in July 2021. The German companies regard it as a distortion of competition if they are subject to more stringent conditions than corporations working on an international scale. Jochen Flasbarth, State Secretary at the German Federal Ministry for Economic Cooperation and Development (BMZ), stressed that the new regulations were not meant to be an entry barrier, but that complying with sustainability standards was important. “We want to work out a comprehensive supply chain regulation together with Africa,” Flasbarth said.