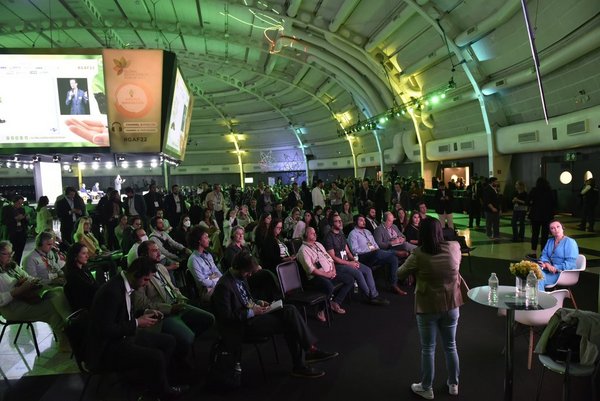 "Technology is what we need"

The Global Agribusiness Forum has been organised by Brazil’s agrifood industry since 2012 in order to highlight the latest challenges the sector is facing. This year’s event focused on the topics of food security, climate change and sustainability.

Brazil is the world’s number one producer of soybeans; regarding its share of grain crops (rice, barley, soybeans, corn and wheat) at just below eight per cent of world production, the country comes fourth after China, the USA and India. Over the last four decades, grain production has grown almost fivefold, and Brazil is confident that it can expand its contribution to global food security even further. Representatives of the agribusiness sector, research and politics explained how this can be accomplished without being antagonistic to sustainability and environmental protection at the Fifth Global Agribusiness Forum in Brazil’s economic and financial metropolis São Paulo in late July.

The solutions presented by businesses and research institutions reached from precision agriculture and big data to save natural resources, chemical inputs and fuel through feed additives to extend the shelf life of products over to smart solutions to re-use and recycle ingredients to achieve an optimum of closed loops in production. “Technology is what we need,” was stressed by the panellists more than once. And this very clearly also means biotechnology – ranging from traditional methods such as the use of enzymes in preserving food to modern breeding methods such as genome editing – including first-generation genetically modified organisms (GMOs). Since 1998, Brazil has set its sights on GMOs; with its 52.8 million hectares (2019), it accounts for over 30 per cent of GM-cultivated area in the world (soybean, corn, cotton and sugarcane).

“Genetics does not deteriorate with time and use; its gains are accumulative and permanent; and it helps to produce more with fewer resources,” Luiz Josahkian, Superintendent of the Brazilian Association of Zebu Breeders (ABCZ), maintained, pointing to the advantages of crossbreeding zebu cattle, which has resulted not only in the adaptation of existing animals to the tropical climate but also in better feed utilisation and higher milk and meat performance. Bovines are not native to Brazil, but were introduced from the Iberian Peninsula during colonisation; out of just a few thousand zebu cattle brought from India, a population has evolved of what today is around 160 million animals with zebu genetics, which has made Brazil the number one beef exporter.

Listening to nature – the recipe for success

Brazil is also the world’s number one producer of sugarcane.  “In agriculture, we have concentrated for too long on the chemical aspect and left aside the biological aspect,” said Leontino Balbo, Director of the Brazilian sugar company Usina São Francisco. Founded in 1946, today, this family enterprise is Brazil’s biggest organic sugar grower, producing 34 per cent of the world’s organic sugar exports. Agronomist Balbo is convinced that the Green Revolution, with its heavy use of pesticides and fertilisers, has led to a high degree of soil compaction in which the soil structure and its ability to retain and sustain water has gone lost. Balbo, a son of Italian immigrants, already opted for regenerative agriculture years ago.

For this purpose, Balbo first made do without the traditional farming technique of crop burning, in which sugar cane is burnt ahead of the harvest in order to eliminate the leafy material and stalk tops. Instead, biomass is now given back to the soil, thus restoring nutrients and reducing the growth of weeds. To minimise soil compaction, he modified his farm equipment and changed to ultra-soft tyres. Balbo’s cultivation is guided by the natural order prevalent in forest soil – with the aim of developing and maintaining a soil microbiome. Success seems to have proven him right. Today, his system is applied on 22,000 hectares and provides him with yields 25 per cent higher than the average in conventional farms, but with 25 per cent lower input costs, and without using any chemical fertiliser or defensive methods.

Food security in times of crises

The challenges of sustainable production in a time of conflicts formed a further focus at the conference.  As José Maria Sumpsi, member of the High Level Panel of Experts on Food Security and Nutrition (HLPE) of the UN Committee on World Food Security (CFS), explained, while Russia’s war in Ukraine and the absence of grain supplies it has caused – after all, the two countries account for around 28 per cent of grain supplies world-wide – do play a role in the rises in food prices, the UN Food and Agriculture Organization’s World Food Price Index has already been showing a tendency to increase since the second half of 2020.

In order to guarantee global food security, in the short term, it would be necessary to refrain from export restrictions, excessive public stockholding and panic buying of food grains. Better food market information systems and monitoring of commodity futures markets were just as important as financial support to governments of developing countries whose funds for social protection measures are depleted.

In the long run, food production capacities at national level would have to be increased and diversified in a sustainable way and the capacity of local and regional markets, including territorial markets, would have to be enhanced to meet food demand. Investments in mitigation and adaptation of agriculture to climate change (through the adoption of technological innovation and biotechnology) and a radical transformation of our food systems according to the principles and actions approved in last year’s UN Food Systems Summit were necessary, Sumpsi maintained. And last, but not least, international policy coordination through the CFS Global Food Crises Response Framework ought to be deepened.

What can multi-lateralism still achieve?

The role of multilateral organisations in the current crises was viewed controversially. “The United Nations Organisations are not completely efficient, but at the UN Food Systems Summit, important decisions have been taken, for example regarding reducing food loss and waste or sustainable growth,” Sumpsi said. In addition, he stressed the role of UN Secretary General António Guterres in the agreement in late June between Russia, Ukraine and Turkey on the export of grain from the war zone.

“Multi-lateralism is under crisis,” Marcos Sawaya Jank, a professor of agribusiness at Brazilian Insper University, insisted in contrast. Neither the World Trade Organization nor the World Health Organization had been prepared for or in a position to respond to the current disturbances regarding food, sanitary and health security. Jank pointed to the increase in political problems in many parts of the world, combined with the climate crisis, which was further aggravating the food crisis through failed harvests.

Trade in agriculture is far from fair

Edwinie Kessie, Director of the Agriculture and Commodities Division at the World Trade Organization (WTO), also deplored the decision-making within his organisation. Twenty per cent of the world population depend on trade for their calorie intake. But despite numerous WTO negotiating rounds, one was still far away from a fair world trade. There were still many distortions in the agricultural sector, while agricultural taxes were around twice as high as those for manufacture goods. Robust rules were needed ensuring that agricultural trade could at last be made fair. These above all included doing away with subsidies distorting competition. “Competitiveness should not depend of the size of pockets of the government. We do not want to have a subsidy war that only rich countries can win,” the WTO representative said.

Deforestation remains a bone of contention

Some agribusiness representatives also regarded European Union regulations such as the Green Deal with its Farm to Fork Strategy or the European Commission’s proposal for EU legislation on stopping deforestation which Europe was responsible for as distortions of competition or attempts to eliminate undesirable competition. Here, opinions were clearly controversial. “If Brazil wants to further develop its role as an important global food supplier and attract investments, we must above all address the topic of deforestation. Illegal deforestation continues to be a big issue,” Marcos Sawaya Jank maintained.

The latest satellite data from the National Space Agency (Inpe) appears to confirm this, indicating that in the Amazon Region, 5,474 square kilometres was cleared from January to July, which is up 7.3 per cent from the same period of last year. While with its 2012 Forest Code, Brazil does have strong legislation according to Jank, implementation is too weak. Bruno Barcelos Lucchi, technical director at the Brazilian Confederation of Agriculture and Livestock, also called for more action against those responsible. After all, they were damaging the reputation of all Brazilian producers. “Brazilian people need to put pressure on the government,” Mark Lyra, Senior Director Energy Innovation at the trading company Sumitomo Corporation, maintained regarding the enforcement of environmental legislation. At the latest, they are going to have an opportunity for this in the forthcoming elections for parliament in October.