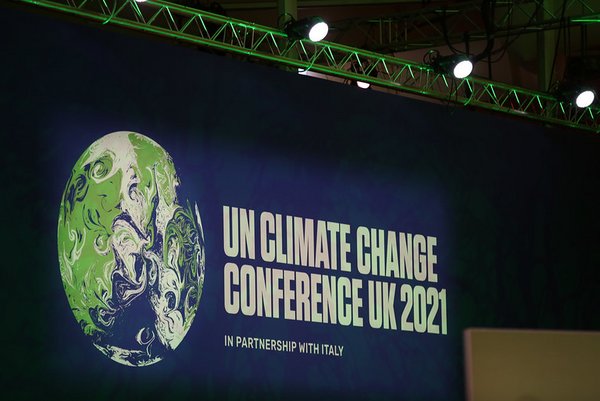 The goals of the Paris Agreement are far out of reach. Countries at COP26 are discussing how to improve climate protection and made commitments to protect forests, reduce methane emissions and accelerate green technology.

Climate commitments fall far short of what is needed to meet the goals of the Paris Agreement, leaving the world on track for a global temperature rise of at least 2.7°C this century, determines the latest Emissions Gap Report 2021:The Heat Is On published by the UN Environment Programme (UNEP) immediately before COP26. This shows that the latest climate promises for 2030 put the world on track for a temperature rise this century of at least 2.7°C. Net-zero commitments could shave off another 0.5°C if such pledges were made robust and if 2030 promises were made that are consistent with the net-zero commitments.

At the United Nations Climate Change Conference (UNCCC) COP26 in Glasgow, UK from 31 October - 12 November 2021 world leaders are discussing how to accelerate climate action. With India, Thailand, Nepal, Nigeria and Vietnam making new net-zero pledges at the conference, 90 per cent of the global economy is covered by net zero commitments.

Glasgow Leaders’ Declaration on Forest and Land Use

More than 100 leaders have endorsed the Glasgow Leaders’ Declaration on Forest and Land Use at COP26, committing to halt and reverse forest loss and land degradation by 2030. Endorsing countries include – amongst others -  Canada, Russia, Brazil, China, Colombia, Indonesia and the Democratic Republic of the Congo. Together, they reflect  85 per cent of the world’s forests, an area of over 13 million square miles which absorbs around one third of global CO2 released from burning fossil fuels each year.

At a major event on methane at COP26, 103 countries, including 15 major emitters such as Brazil, Nigeria and Canada, signed up to the Global Methane Pledge – a US-EU led initiative. Parties who signed the Pledge agreed to take national-level, voluntary actions to contribute to reducing global methane emissions by at least 30 per cent by 2030, using a 2020 baseline. Scientists believe this could eliminate 0.2°C of warming by 2050.

More than 35 world leaders have signed up to the new Glasgow Breakthrough Agenda, a range of actions across five key economic sectors that represent more than half of global emissions: Power, Road transport, Hydrogen, Steel and Agriculture. Among the signatories are the US, India, EU, developing economies and some of those most vulnerable to climate change – collectively representing more than 50 per cent of the world’s economy and every region.

The aim is to make clean technologies the most affordable, accessible and attractive choice for all globally in the most-polluting sectors by 2030, particularly supporting the developing world to access the innovation and tools needed for a just transition to net zero.

CO2 emissions from tourism are forecasted to increase by 25 per cent by 2030 from 2016 levels, according to data from World Tourism Organization (UNWTO). At COP26 more than 300 tourism stakeholders have signed up to the Glasgow Declaration for Climate Action in Tourism, including leading industry players to destinations, countries and other tourism stakeholders, addressing the need to scale up climate action in tourism. They committed to measure, decarbonise, regenerate and unlock finance.

Coal power generation is the single biggest cause of global temperature increases. At COP26, least 23 nations made new commitments to phase out coal power, including Indonesia, Vietnam, Poland, South Korea, Egypt, Spain, Nepal, Singapore, Chile and the Ukraine. In the Global Coal to Clean Power Transition Statement, countries also committed to scaling up clean power and ensuring a just transition away from coal.

Leaders from South Africa, the United Kingdom, the United States, France,
Germany and the European Union have announced a partnership to support South Africa with an Accelerated Just Energy Transition.

The Green Grids Initiative – One Sun One World One Grid, led by UK-India, endorsed by over 80 countries, to mobilise political will, finance and technical assistance needed to interconnect continents, countries and communities to the very best renewable sources of power globally to ensure no one is left without access to clean energy.

The Rockefeller Foundation, alongside IKEA Foundation and Bezos Earth Fund, launched the Global Energy Alliance for People & Planet with an initial USD10 billion of funding from philanthropies and development banks to support energy access and the clean energy transition in the Global South, in strategic partnership with the UK-led Energy Transition Council.

AIM4C, a new initiative led by the US and UAE, with over 30 supporting countries, committed to accelerating innovation in sustainable agriculture, having already garnered USD 4 billion in increased investment in climate-smart agriculture and food systems innovation, including USD1bn from the US.