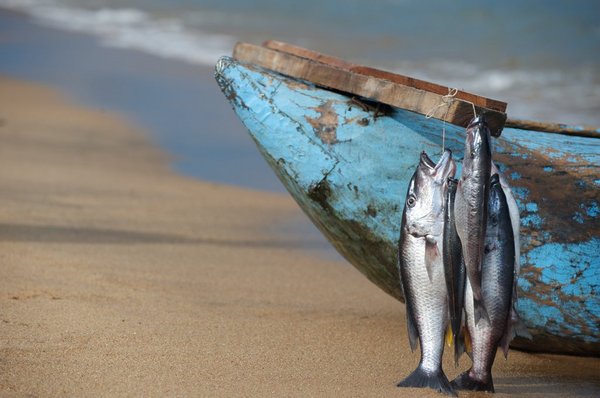 The significance of aquatic food systems for human nutrition and health was well as for climate change mitigation was emphasised at several side events of COP 26.

Aquatic foods have a lower carbon footprint than terrestrial animal-source foods. Sustainably managed, aquatic food systems can buffer communities against some of the impacts of climate change by enhancing their capacity to respond to climate risks. Nevertheless, policy-makers have so far given them insufficient attention in climate-related policies and those regarding the transformation of our food systems. Results of various side events at the world climate conference COP 26, held in Glasgow in Scotland early in November 2021, show that it is high time to change this.

Shakuntala Thilsted, Global Lead for Nutrition and Public Health at WorldFish and 2021 World Food Prize Laureate, emphasised the significance of aquatic food systems for human nutrition and health. Aquatic foods are an essential source of protein and micronutrients for 3.3 billion people. Thanks to their nutritional value, they are recognised as superfoods, as they provide multiple highly bioavailable micronutrients such as calcium, zinc, iron and vitamins (vitamin B12, vitamin A) as well as essential fatty acids. The intake of these micronutrients and essential fatty acids in women and children in the first 1,000 days of life could improve both cognition, development and growth in children and healthy nutrition in adults, Thilsted stressed.

In addition to this nutrition-physiological significance, aquatic foods could play a key role in creating healthier low carbon climate-resilient food systems, the scientist maintained. To achieve this, it was necessary to make use of the entire diversity which aquatic food offered. For example, farming of seaweed, a superfood rich in multiple micronutrients and essential fatty acids, was showing great potential in mitigating climate change and contributing to adaptation and resilience.

In order to benefit from the potential of aquatic diversity, Thilsted recommended looking at traditional knowledge and the ways that indigenous communities had been using this diversity. These lessons learnt ought to be combined with today’s new technologies. For instance, the micronutrients and essential fatty acids of seaweed could be concentrated by a factor four to five by removing the moisture content. Moreover, the potential of wetlands for the production of diverse aquatic food was still largely untapped. “Sustainable nature- positive aquatic foods must be a key part of Nationally Determined Contributions and National Adaptation Programmes of Action at COP 26”, Thilsted stressed.

Putting equity at the core of food systems transition

All aquatic food systems were vulnerable or prone to the impacts of climate change, noted Essam Yassin Mohammed, Global Lead for Climate and Environmental Sustainability at WorldFish. This applied in particular in the tropical regions, where the majority of poor people live. Mohammed cited a recent study which showed that, other than for high-income countries, profits from aquatic food systems in low-income countries were projected to plummet in the future. For example, the Special Report of the Intergovernmental Panel on Climate Change (IPCC) on the Ocean and the Cryosphere had shown that owing to sea warming, sardines off the coast of Senegal were migrating northwards at a rate of more than 50 kilometres per decade. “Those small-scale fishers along the coasts of Senegal will have neither the financial nor the technical means to pursue these fish and as a result, they will be highly impacted,” Mohammed emphasised.

If aquatic food systems were sustainably utilised, they emitted much lower greenhouse gas levels than land-based food production systems. The climate specialist took the example of Egypt. Here, the tilapia, which had been genetically improved by WorldFish with partners, demonstrated an up to 36 per cent reduction in environmental impacts including greenhouse gas emissions. It had also become apparent that the use of low-fuel gear could lower greenhouse gas emissions in some fisheries by 61 per cent, while reducing feed usage and switching to deforestation-free inputs could lower emissions from aquaculture by 50 per cent. “There is a huge opportunity and scope for improvements in putting aquatic foods on low emissions pathways,” Mohammed said. However, when making the transition to low carbon aquatic food-based diets, one needed to make sure those furthest behind were not left behind. Equity had to be at the core of the transition to low-carbon aquatic food systems, Mohammed stressed.

Given these aspects, it is all the more difficult to understand why only two per cent of climate finance had gone to small island states by 2019 – although they are the countries suffering most from the impacts of climate change and are among the most highly indebted countries in the world, as Ronny Jumeau, the Ambassador for Climate Change and Small Island Developing States Issues of the Republic of Seychelles, stated. With its “Blue Financing” system, Seychelles had raised financing to protect 30 per cent of the ocean space, while 70 per cent remained for sustainable use, Jumeau explained. He referred to the example of a one million US dollar research project for the propagation of juvenile sea cucumbers, to check overfishing in this sector. Furthermore, the country had committed to protect 100 per cent of its seagrasses by 2030.

In the fisheries sector, blue grants and blue loans were being provided to support the transition to sustainable practices, but also to promote new ones. Thirty-three per cent of the grants went to youth and more than 50 per cent to women. “We are a small island developing state, but we think like a big ocean state”, Jumeau said. Many ideas presented at COP 26 came from countries of the Global South.