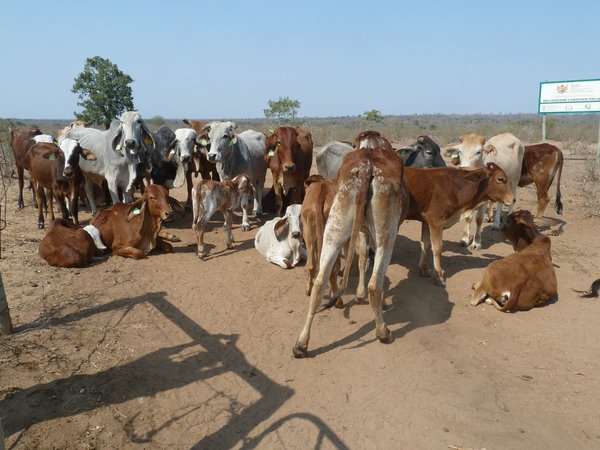 Researchers from Germany’s Senckenberg Institute and South Africa’s Stellenbosch University have investigated how climate change could affect vegetation in protected areas in Africa. In their study, which was published in the journal “Conservation Biology”, the team show where these effects may coincide with population growth and land use changes. According to their simulations, biodiversity in almost all protected areas will be threatened by at least one of these factors by the end of the 21st  century.

African elephant, white rhinoceros, leopard, Cape buffalo and lion – the “Big Five” –  are symbolic of Africa’s unique wildlife. “Africa’s protected areas harbour a far greater biodiversity than just these five iconic animals. They are the last strongholds of the continent’s unique biodiversity,” explains Carola Martens of the Senckenberg Biodiversity and Climate Research Center (SBiK-F) and Goethe University Frankfurt, Germany, and she continues, “But this diversity is threatened by climate change, population growth, and future land-use changes!”

Martens and her colleagues ProfessorThomas Hickler (SBiK-F), Dr Simon Scheiter (SBiK-F), and Professor Guy F. Midgley (Stellenbosch University) have studied the future impacts of climate-induced vegetation changes in Africa’s protected areas, incorporating population density and land use, for two scenarios up to the end of the 21st century.

Their modelling study aims to show where the three factors will be important in the coming decades and where they may interact. “Climate change is increasingly threatening biodiversity as vegetation zones and habitats change for many species. In addition, the growing world population, combined with globally rising living standards requires more and more land for food production, to meet the rising demand for meat, and for bioenergy. We can only halt biodiversity loss if we understand the interactions between climate change, population growth and land use,” says Martens, explaining the approach.

Use of the “adaptive Dynamic Global Vegetation Model” (aDGVM)

The simulations were carried out using the “adaptive Dynamic Global Vegetation Model” (aDGVM) for the following two scenarios: the “middle-of-the-road” scenario, in which current societal developments continue and some climate change mitigation measures are adopted, and the “fossil-fuelled development” scenario. In the latter, social and economic development is based on the increased exploitation of fossil fuel resources with a high coal content and an energy-intensive lifestyle world-wide.

In addition, the researchers analysed global scenarios for the development of the human population and of land use.

“The results show that in both scenarios, tree cover generally increases in today’s grasslands and savannahs in Africa. For protected areas in West Africa, our analyses revealed climate-induced vegetation change combined with high future population and land use pressures. Only for North Africa, we expect that a large share of protected areas to be without vegetation changes in combination with decreased pressure from population and land use – generally, the pressure on protected areas is therefore increasing,” says the Senckenberg researcher.

According to the study, the “fossil-fuelled development” scenario resulted in greater climate-induced changes in tree cover and higher land-use pressure at the continental scale, while the “middle-of-the-road” scenario was characterised by higher future population pressure.

“Our work demonstrates that in the future, almost all protected areas are threatened by at least one factor: climate change leading to major vegetation changes, a large increase in the population around the protected area, or growing land-use pressure,” Martens explains.

“The biodiversity of protected areas in West Africa may be particularly affected by this – facing a combination of strong climate change impacts, population growth, and land-use changes,” she summarises. Giving an outlook, she says: “A sound understanding of individual socio-economic and ecological conditions as well as of existing or potential future conflicts is an important basis for the planning of protected areas. Conservation and protection strategies need to be regionally and locally adapted. This can contribute to the protection of the unique diversity of Africa’s ecosystems!”