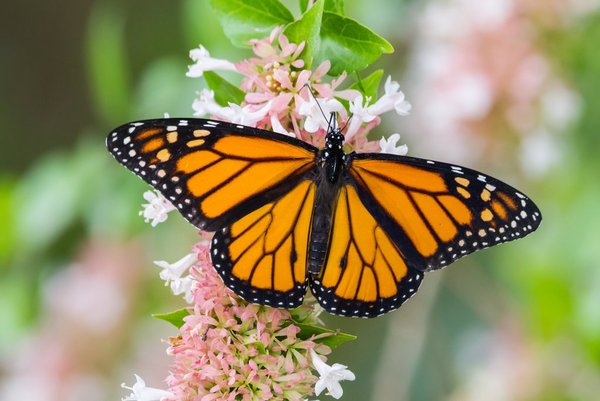 More effort is needed to preserve the rich diversity of nature, according to the latest version of the Red List of Threatened Species.

In July 2022, the International Union for Conservation of Nature (IUCN) presented the updated Red List of Threatened Species. It paints a “gloomy picture of the state of flora and fauna“, says the conservation organisation World Wide Fund for Nature (WWF) Deutschland. The updated Red List now includes 147,517 species, of which 41,459 are threatened with extinction – that is 28 per cent of all assessed species.

The migratory monarch butterfly (Danaus plexippus plexippus), known for its spectacular annual journey of up to 4,000 kilometres across the Americas, has now entered the IUCN Red List of Threatened Species as Endangered, threatened by habitat destruction and climate change.

All surviving sturgeon species – also migratory, found across the northern hemisphere – are now at risk of extinction due to dams and poaching, pushing the world’s most Critically Endangered group of animals yet closer to the brink. Renowned for their size, with the Critically Endangered Beluga (Huso huso) growing up to eight metres and 1,700 kilograms, sturgeons have been overfished for their meat and caviar for centuries. Despite being protected under international law, poaching continues to affect more than half of these species; stronger enforcement of regulations on the illegal sale of sturgeon meat and caviar is critical to stop further declines.

The tiger (Panthera tigris) has been reassessed, new figures revealing that there are currently between 3,726 and 5,578 tigers in the wild worldwide. The 40 per cent increase since the last tiger assessment in 2015 is the result of improvements in monitoring, showing that there are more tigers than previously thought, and the number of tigers globally appears to be stable or increasing. While this reassessment confirms that the tiger remains Endangered on the IUCN Red List, the population trend indicates that projects such as the IUCN Integrated Tiger Habitat Conservation Programme are succeeding and recovery is possible as long as conservation efforts continue.