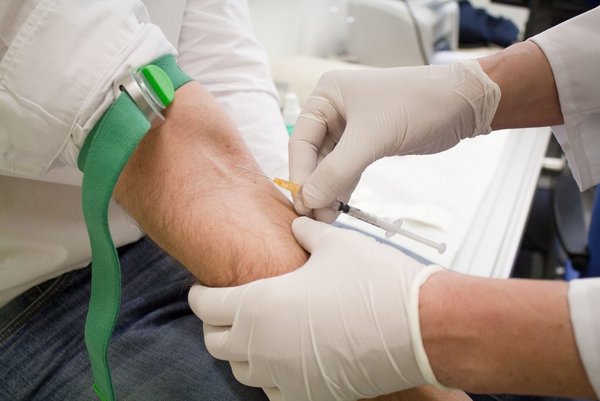 The vaccine, developed by scientists of the University Hospital of Tübingen, is injected into the test person at the same time as he or she receives an antimalarial drug.
Photo: ©University of Tübingen / Paul Mehnert

Scientists at the University Hospital of Tübingen/Germany have been able to demonstrate broad protection against malaria using a whole parasite PfSPZ vaccine.

At the University Hospital of Tübingen in Germany a clinical trial led by Dr Zita Sulyok, Institute of Tropical Medicine, Professor Dr Peter Kremsner, Director of the Institute for Tropical Medicine, Travel Medicine and Human Parasitology and Dr Rolf Fendel, Research Group Leader at the Institute of Tropical Medicine partnered with the German Center for Infection Research (DZIF), was able to show that the “Sanaria PfSPZ-CVac” vaccine, which is being developed in Tübingen together with the biotechnology company Sanara Inc., provides 77 per cent cross-train protection against malaria parasites.

The study entitled “Heterologous protection against malaria by a simple chemoattenuated PfSPZ vaccine regimen in a randomized trial” is currently published in the renowned scientific journal “Nature Communications.”

„PfSPZ-CVac“ is a live vaccine consisting of infectious Plasmodium falciparum (Pf) malaria parasites that are injected into the proband at the same time as he or she receives an antimalarial drug. The parasites quickly enter the liver where they develop and multiply for seven days, and then emerge into the blood. As soon as the parasites leave the liver, the drug kills them immediately. Thus, the immune system of the vaccinated test person is primed against many parasite proteins and becomes highly effective at killing malaria parasites in the liver to block infection and prevent disease.

A milestone in the development of an effective malaria treatment

"With this study, we have reached a new, important milestone in the development of an effective malaria vaccine. With only three immunisations over four weeks, we achieved very good protection against malaria," explains Professor Peter Kremsner. His team was able to develop a new immunisation regimen that significantly reduces vaccine administration compared to previous studies. The number of visits required by a person for complete immunisation has been reduced from 13 to three. Importantly, the team showed that vaccination with parasites from Africa could protect against genetically diverse parasites from South America.

Proof of efficacy was provided using the controlled human malaria infection (challenge) regimen developed in Tübingen as part of a DZIF project together with Sanaria. Here, the test persons were infected with parasites after immunisation. If immunisation against the parasites was successful, the parasites would be specifically killed by the immune system. If the immune protection is incomplete and the parasites multiply, the test persons are treated before any symptoms of disease appear. Ten of 13 probands vaccinated in this study were completely immune to the infection.

With an estimated 229 million infections and 409,000 deaths worldwide in 2019, malaria is one of the world's most important and dangerous infectious diseases. It is caused by parasites transmitted to humans through the bites of infected female mosquitoes.

Children under the age of five are the most vulnerable group affected by malaria, accounting for 67 per cent (274,000) of all malaria deaths worldwide in 2019.