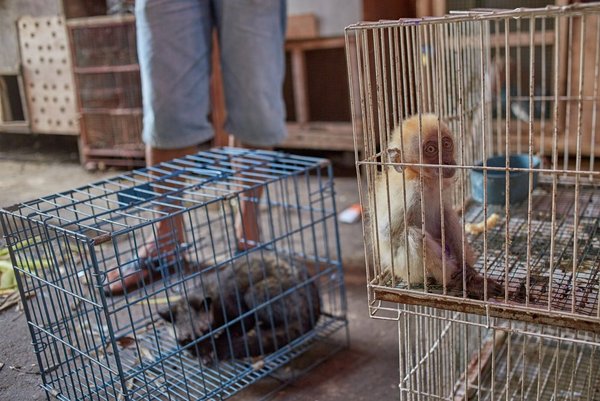 An international alliance against health hazards in trade in wild animals

Each year, nearly three million people die of diseases which have jumped from animals to humans – so-called zoonoses. These diseases include AIDS and Ebola as well as the corona virus. On the occasion of World Zoonoses Day, the 5th July, together with international partners and non-governmental organisations, Germany’s Federal Ministry for Economic Cooperation and Development (BMZ) and Federal Ministry of Environment (BMU) presented a new international alliance against health hazards in trade in wild animals campaigning for the prevention of new zoonoses.

The International Alliance against Health Risks in Wildlife Trade was initiated by the BMZ and the BMU. In an initial move, representatives of more than 50 organisations and institutions in areas ranging from human and animal health through nature conservation and food to agriculture got together to define common goals. They include governments, UN organisations, science institutions and non-governmental organisations, among them the WWF, the German NGO NABU, the Wildlife Conservation Society and the Frankfurt Zoological Society in Germany. Initial measures are already being implemented.

Three quarters of all new infectious diseases are zoonoses

Germany’s Development Minister Gerd Müller sent a clear message on World Zoonoses Day. “We are facing a threat which is greater than what many are aware of. Three quarters of all newly emerging infectious diseases are zoonoses. There are 1.7 million as yet undetected viruses in mammals and birds,” the Minister declared.

Müller pointed out that experts had identified dozens of zoonotic viruses with a pandemic potential. “The closer contact between wild and domesticated animals and humans is, the greater the probability of disease transmittance will be,” he emphasised. “This is why Germany is one of the largest donors in the world-wide campaign to combat poaching and illegal trade in wild animals.” Conserving biological diversity was a focal area of development cooperation, with Germany figuring as the second-largest bilateral biodiversity conservation donor.

As Germany’s Federal Environment Minister Svenja Schulze stressed presenting the Alliance, destroying nature raises the risk of viruses being transmitted to humans and hence the emergence of new pandemics. This was the common insight of scientists world-wide as summarised by the World Biodiversity Council last year.

“Illegal trade in wild animals, which is threatening countless species and by now belongs to the most lucrative forms of cross-border organised crime, has to be tackled resolutely,” the Minister said, noting that legal trade in wild animals also needed better controlling. “To make this global effort, we have to forge new alliances,” Schulze stressed. “This is why it is a good thing that nature conservation, development cooperation and health protection have joined forces here.”

The WWF is also calling for fundamental changes in regulations on many areas of trade in wild animals. “The prevailing trade structures have to be analysed regarding their risks, and corresponding counter-measures need to be designed and implemented,” said Eberhard Brandes, Chairman of WWF Germany. “The more we destroy ecosystems and bring them out of balance, the more humans and their livestock come into contact with wild animals, the greater the risk will be of diseases jumping from animals to humans.”

“If we are seeking to avoid pandemics in the future, we must also engage in ‘distancing’ from wild animals,” demanded Jörg-Andreas Krüger, President of the German environmental organisation NABU. “Viruses don’t distinguish whether animals were caught, bred or killed legally, illegally, sustainably, for food consumption, traditional medicine or other purposes. All they need is contact. And that is what we are giving them by invading their habitats, exploitation and intensive livestock farming,” Krüger noted during the presentation of the Alliance.

Since 2013, Germany has been providing at least 500 million euros a year for the conservation and sustainable use of forests and other ecosystems. Around 80 per cent of this sum comes from the BMZ budget and roughly 20 per cent from the BMU. In addition, the BMZ is in the process of expanding its "One Health" activities, which holistically address health in humans, animals and nature.