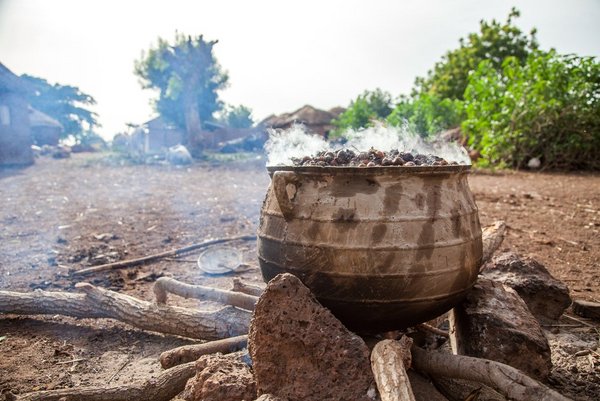 For many African families living in the “shea belt”, the shea tree is an important source of nutrition and income.
Photo: ©Iago Hale/UNH

Genomic resources to guide improvement of the shea tree

Researchers have sequenced the genome of the shea tree, a vital social and economic crop best known as a source for the popular ingredient shea butter, which is found in products like cosmetics and chocolate.

The shea tree is a vital social and economic crop that is best known for the popular product shea butter – a multimillion-dollar ingredient used in cosmetics, personal care products, pharmaceuticals and chocolate. For hundreds of thousands of African families living in the “shea belt”, it is also a crucial source of nutrition and income.

Despite its increasing demand, the slow-growing shea tree is being threatened by other cash crops, and its preservation most likely lies in its genetic improvement. To enable such work, an international team of researchers led by the University of New Hampshire, USA, has sequenced the shea tree’s genome, providing a valuable resource for the strategic development of the species.

“A shea tree can take 25 years or more to come into production, so it can be very costly for a farmer to wait that long and wonder if a tree is worth keeping,” said Iago Hale, Associate Professor of specialty crop improvement at the University of New Hampshire. “With such a long growing period, traditional breeding strategies simply aren’t viable, which is one reason why there aren’t any high-performing shea varieties. The shea genome will enable researchers to gauge the potential of a seedling as soon as it germinates and through genome-enabled tree selection, we can start moving the needle on this difficult species.”

In their study, published online in the journal Frontiers in Plant Science last September, researchers assembled a chromosome-scale reference genome for the shea tree. Like the human genome, the shea tree genome contains genes that determine traits helping researchers to determine tree characteristics. Genome annotation by the researchers led to the identification of 38,505 coding genes.

Shea is the “women’s gold”

Shea butter plays a significant role in the daily lives of millions of African families living in the Sudo-Sahelian region, which spans over 20 countries. Collecting shea nuts is nearly a universal household activity across the shea belt and, unlike other economic activities, is controlled almost entirely by women. According to daily shea butter consumption data, the number of women taking part in shea nut collection is estimated at more than 18 million.

Shea is referred to as "women’s gold" because the sale of its products allows women to secure additional food for their families once cereal harvests are over and to generate cash for household expenses, including clothing, medicine and school fees.

The seasonality of shea availability is also critical since shea fruits are the only widely available, energy-rich food source at the end of the dry season.

“The shea parklands are in decline due to the threat of alternative, typically male-controlled cash crops like cashew and mango and the immediate pay-off of cutting questionably productive trees for firewood,” said Hale. “Women need to travel longer distances to collect shea nuts, which means more labour and less profits. To counteract these trends, we need to enhance the value of shea in the landscape. Genome-assisted breeding presents a path for achieving that.”

Internationally, shea butter is valuable for its use as a high-quality cocoa butter equivalent (CBE) in the chocolate industry. This is linked to its relatively simple fatty acid composition and its high levels of stearin, the primary determinant of shea butter quality. Using the newly mapped genome, researchers identified 45 fatty acid biosynthesis genes in shea that likely govern stearin content. Being able to spot these enzymes could help researchers develop better selection strategies for seedlings.