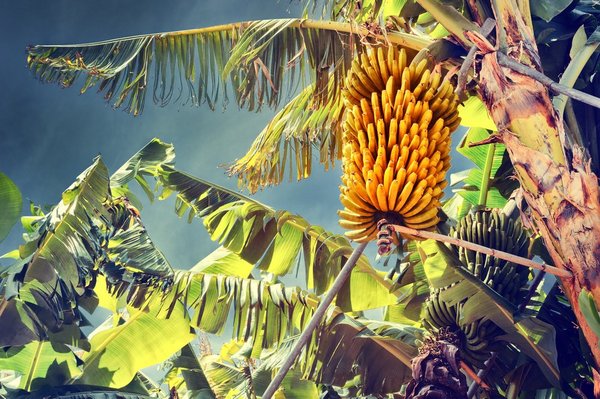 The destructive banana weevil can cause up to 100 per cent yield loss.
Photo: © Shutterstock

Markers associated with resistance to the banana weevil borer identified

An international team of researchers have identified markers associated with resistance to the banana weevil borer, which is one of the worst pests in banana and plantain production.

Scientists at the International Institute of Tropical Agriculture (IITA) and their collaborative partners from the Gnomixx BVBA, Belgium, have identified molecular markers associated with resistance to banana weevil—one of the most destructive pests of the crop that can lead up to 100 per cent yield loss.

Identifying the markers on a crop’s genome in a population derived from a cross from two banana accessions, “Monyet” and “Kokopo”, will aid the development of resistant varieties— which are the most effective way to control the pest for resource-poor smallholder farmers.

The banana weevil borer, Cosmopolites sordidus (Germar), is one of the major banana pests that constrains banana and plantain production, both important staple foods and sources of income for millions of people globally and in sub-Saharan Africa in particular. The larvae of the banana weevil feed on the underground banana stem, called a corm, impeding nutrient and water uptake and causing plants to topple.

The identified weevil-resistance markers will be used to develop molecular tools for marker-assisted breeding in bananas.

Yield losses from this pest worsen with every subsequent ratoon (growth of a new plant from the suckers after harvesting the parent crop) due to the build-up of the infestation. Yield losses of up to 100 per cent can be realised because of the complete disappearance of the banana mat.

While cultural methods can reduce the pressure of weevils in a banana field, growing resistant varieties is the only sustainable way of combatting the pest. Unfortunately, most cultivated banana varieties, including the East African highland cooking bananas (Matooke) and plantain, are susceptible to the weevils.

Molecular markers promise to speed up the selection process

While banana improvement through crossbreeding has registered success as hybrids have been released in East Africa and the rest of the banana-growing world, the process is slow, tedious, and expensive, taking up to two decades. The use of molecular markers promises to speed up the selection process by selecting the good, resistant material in the nursery, thereby reducing the long selection cycles in the field that take many years.

“This is exciting news for the banana breeding community. Previous studies on weevil resistance had only identified banana accessions resistant to weevils. This is the first time that resistance to weevils has been localised at the genomic level”, says Brigitte Uwimana,  IITA banana molecular breeder who led the study.

Because bananas are polyploid (meaning they have more than two copies of each of their 11 chromosomes), the scientists had to use a non-conventional way of identifying the region associated with resistance, a method called “continuous mapping”. The identified markers associated with resistance to weevil damage will be used to develop molecular tools for marker-assisted breeding in bananas.

The work was conducted by the scientists from the IITA (CGIAR) Banana Breeding Programme and Gnomixx BVBA, Belgium, as part of the Breeding Better Banana project funded by the Bill & Melinda Gates Foundation. It is part of the CGIAR Research Program on Roots and Tubers (RTB).