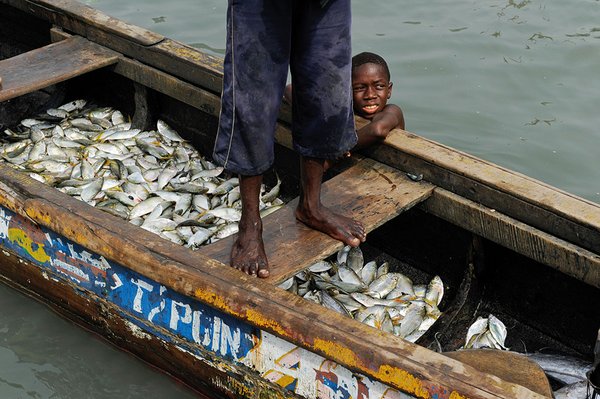 Worldwide demand for farmed carnivorous seafood such as salmon and scampi is growing rapidly. The accompanying demand for fishmeal and fishoil is a threat to the nutrition security and livelihoods of West African fishing communities.
Photo: Jörg Böthling

More aquaculture to feed the world? Not at the expense of African fishing communities

Nowadays, aquaculture provides more people with food than capture fisheries, and the tendency is growing. The accompanying demand for fishmeal and fishoil, driven mainly by China, is increasingly being covered by West African fishing. However, putting the blame for the threat to fish stocks in the region solely on China’s appetite for seafood falls a little short. Our author explains the complicated context and calls for responsible action – not only on the part of politics.

At a meeting co-organised with the European Union and the Organisation of African, Caribbean and Pacific States in late September, the UN Food and Agriculture Organization (FAO) stated that its vision for the transformation of aquatic food systems focused on feeding the world through aquaculture expansion: ‘the target is to achieve 30/ 45% aquaculture growth by 2030 with quality food produced sustainably’. The sector has already been booming in the last decades, with world aquaculture contributing 46 per cent of global fish production in 2018, up from 25.7 per cent in 2000, and mainly driven by China. And the trend continues, with aquaculture nowadays supplying more fish and seaweed for human consumption than capture fisheries are. But there is a catch: farmed carnivorous marine species, like salmon or shrimp (scampi), widely consumed in industrialised countries, are grown using fishmeal and fishoil (see Box) made from wild small oily fish, the small pelagic species, including West Africa's sardinella, which are traditionally consumed fresh or artisanally processed by the local populations.

Globally, roughly one third of fishmeal goes to the agricultural sector to feed pigs and chickens in industrial farms. However, aquaculture became the dominant user of ‘reduction fisheries’ (which supply fish for FMFO rather than for direct human consumption) in the early 2000s. In 2016, 69 per cent of fishmeal and 75 per cent of fishoil production went to seafood farming (FAO figures).

The FAO also predicts that the chief producing countries, such as China, are expected ‘to continue the transition from extensive to intensive fish farming’ during the next decade. Intensifying fish farming, particularly of carnivorous species, is increasing the pressure on small pelagics, putting in jeopardy the future of African fishing communities whose livelihoods have depended on sardinella for centuries. It is also depriving the West African populations of a healthy, affordable, nutrient-rich source of proteins. In a nutshell, the rich man’s fish is eating the fish of the poor.

In Mauritania and Senegal, sardinella is the most important species of small pelagic fish for the nutrition of the local populations. It is traditionally caught by the artisanal fishing sector. In 2018, Senegalese fishermen’s organisations raised the alarm about decreasing sardinella catches. Data collected by scientists over the past 20 years indicate that sardinella fishing mortality has been gradually increasing. In the period 2000–2013, this was due to the exploitation of sardinella by foreign factory trawlers, particularly in Mauritania, fishing for markets in Russia and Eastern Europe, but also in West Africa (Nigeria, Ivory Coast, etc.). However, after 2012, they were replaced by those fishing for the fishmeal industry, in Mauritania, but also in Senegal and The Gambia. In the region, fishmeal factories are supplied by industrial vessels, but also by some artisanal fishers.

Whereas catch volumes of artisanal fleets was restricted by the demand from the human consumption market in earlier years, this limitation no longer exists. The fishmeal plants can absorb large quantities of fish, which stimulates artisanal fishermen to increase their effort. Mauritanian fishmeal plants have even brought in a completely new fleet of efficient Turkish purse seiners to supply them with fish. Senegalese fishermen from Casamance are now landing catches at fishmeal plants in Gambia. Sometimes, these landings are so big that even the fishmeal plants cannot absorb them. As a result, considerable quantities of sardinella have to be dumped at sea or on the land. The women fish processors’ activity is threatened because of the competition from fishmeal factories that are buying all the sardinella.

This rush is led by the global demand for fishmeal and fishoil (FMFO). The main markets for those products from West Africa are in China. But countries like Norway, where fishmeal goes to salmon feed, or France, where fishoil is being used for producing Omega 3 rich food supplements, play a role too, as is described below. In July 2021, the Coalition for Fair Fisheries Arrangements (CFFA) reviewed a report from Greenpeace and the Changing Markets Foundation called “Feeding a Monster: How European aquaculture and animal feed industries are stealing food from West African communities”, to highlight its implications for the European Union. The report emphasised that “every year, over half a million tons of fresh fish that could be feeding millions of people in West Africa are being diverted to produce fishmeal and fishoil in order to feed animals in industrial aquaculture and farming”.

Lack of transparency in the fishmeal and fishoil business

Fishmeal and fishoil business in West Africa is opaque. It’s virtually impossible to know exactly how much fish is used for producing how much fishmeal and fishoil, and to trace a particular batch to its end destination. There is room for improvement, when it comes to the transparency and traceability of farmed seafood using fishmeal and fishoil, including for the EU, where today, it is impossible to know whether a farmed salmon sold in your supermarket has been fed with fishmeal coming from West Africa, or whether this fishmeal was even sourced legally. Indeed, the EU regulation to combat illegal fishing, which includes the delivering of a catch certificate to show that the fish products we eat come from legal operations, does not cover farmed fish products.

The global fishmeal and fishoil production is dominated by a few large companies, three of them being Norwegian – Cargill Aqua Nutrition/ EWOS, Skretting and Mowi – and one Danish, BioMar. The Greenpeace/ Changing Markets report underscores that well-known retailers across Europe are sourcing farmed fish (such as salmon) from companies linked in a supply chain to the big four aquafeed companies which are involved in the trade of FMFO from West Africa.

Norway is the home of intensive salmon farming and the main source of farmed salmon imports to the EU. In the last decades, NGOs like the Green warriors in Norway, Greenpeace or Compassion in World Farming have denounced the catastrophic consequences of this trade. Intensively farmed salmon are fed on processed food that includes an important portion of fishmeal and fishoil, and are treated with medicines to fight diseases and parasites such as sea lice, which literally eat the fish alive. Their pens are placed in coastal waters, with thousands of tons of waste (including pesticides, fish faeces and food waste) released into the surrounding environment. Sea lice from farmed fish pens also plague wild salmon as they swim past fish farms. The fact that some of the Norwegian salmon farms use fishmeal and fishoil from West Africa only adds to the social and environmental unsustainability of the operation.

While the EU is not a major importer of fishmeal, it’s another story for fishoil. France, in particular, is a major market for West African- produced fishoil. The Changing Markets/Greenpeace report highlights that in 2019, more than 70 per cent of the 35,000 tons of fishoil produced by Mauritania was destined for the EU, with France totalling over 60 per cent of the EU imports from Mauritania, followed by Denmark. The main French importing company is Olvea, a supplier of vegetable and fishoils for animal feed and human consumption. France therefore plays a key role as an “end market” for fishoil from West Africa, which deprives millions of West Africans of access to this essential source of fatty acids and vitamins.

The rich man’s fish is eating the fish of the poor.

Some EU companies are also producing FMFO in West Africa, causing havoc in coastal communities, like the Spain’s Barna, which opened a fishmeal plant in Cayar (Sénégal). Many fishers in Cayar are opposed to the factory, believing it will only contribute to the destruction of the already fragile small pelagics resource. Another reason for the population’s anger is the disastrous environmental consequences of the dumping of wastewater and the stench that the factory has given off since it started production, which has led to the appearance of many respiratory infections in the area.

A promising wind of change

However, in the EU, a wind of change may be coming: the ‘Strategic guidelines for a more sustainable and competitive EU aquaculture for the period 2021 to 2030’, adopted not long ago, promotes “low-impact aquaculture (such as low-trophic, multi-trophic and organic aquaculture)”. Recently, the Director of the European Commission Directorate on Fisheries and Maritime Affairs, Charlina Vitcheva, highlighted that “the increased demand for feed for aquaculture should not deprive local communities of nutrition security and livelihoods”. The European Green Deal and the EU’s Farm to Fork strategy give us the opportunity to call for more transparency across fish farming value chains, and to ensure that our food systems contribute to deliver environmental sustainability, food poverty reduction and empowerment of communities.

On their part, West African artisanal fishing communities, with the support of NGOs like Changing Markets, or CFFA, are calling on governments to act now: fishmeal and fishoil production using fish fit for human consumption should be banned in the whole of West Africa, and intensive aquaculture of carnivorous marine species, and consumption of these products, should be phased out.

In the EU, at the moment, this may sound like wishful thinking, given the increasing volumes of (imported) farmed carnivorous seafood, especially salmon and scampis, consumed by Europeans. If they wish to support thriving fishing communities in West Africa, consumers also have a responsibility to act: they should stop eating intensively farmed salmon and scampi!

Béatrice Gorez has been spokesperson and coordinator of the Coalition for Fair Fisheries Arrangements (CFFA) activities since 1994. The CFFA is a platform of EU-based NGOs and African artisanal fishing organisations which has documented EU-Africa relations that affect African fishing communities, and relays the views of these communities to the EU institutions.
Contact: cffa.cape@gmail.com

FAO (2020): The State of World Fisheries and Aquaculture 2020. In brief. Sustainability in action. Rome.

Gorez, Béatrice (2021): The EU: “The increased demand for feed for aquaculture should not deprive local communities of nutrition security and livelihoods”. https://www.cffacape.org/news-blog/the-eu-the-increased-demand-for-feed-for-aquaculture-should-not-deprive-local-communities-of-nutrition-security-and-livelihoods.