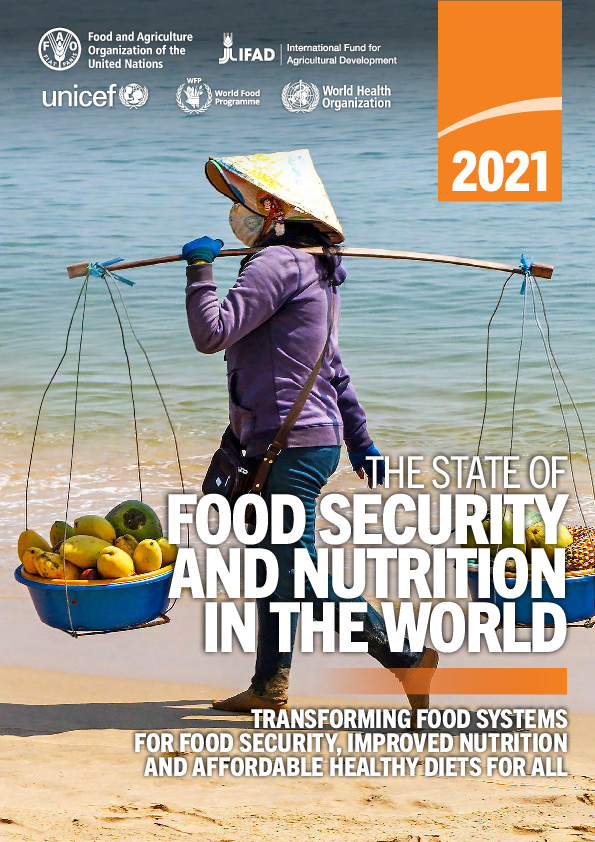 The State of Food Security and Nutrition in the World

There was a dramatic worsening of world hunger in 2020 - much of it likely related to the fallout of COVID-19, this report explains. It will take a tremendous effort for the world to honour its pledge to end hunger by 2030.

Around a tenth of the global population - up to 811 million people - were undernourished last year according to the report The State of Food Security and Nutrition in the World, published in July 2021.

At current trends, The State of Food Security and Nutrition in the World estimates that Sustainable Development Goal 2 (Zero Hunger by 2030) will be missed by a margin of nearly 660 million people.

Already in the mid-2010s, hunger had started creeping upwards, dashing hopes of irreversible decline. Disturbingly, in 2020 hunger shot up in both absolute and proportional terms, outpacing population growth: some 9.9 per cent of all people are estimated to have been undernourished last year, up from 8.4 per cent in 2019.
More than half of all undernourished people (418 million) live in Asia; more than a third (282 million) in Africa; and a smaller proportion (60 million) in Latin America and the Caribbean. But the sharpest rise in hunger was in Africa, where the estimated prevalence of undernourishment - at 21 per cent of the population - is more than double that of any other region.

In 2020, more than 2.3 billion people (or 30 per cent of the global population) lacked year-round access to adequate food: this indicator - known as the prevalence of moderate or severe food insecurity - leapt in one year as much in as the preceding five combined. Gender inequality deepened: for every 10 food-insecure men, there were 11 food-insecure women in 2020 (up from 10.6 in 2019).

As outlined in last year's report, transforming food systems is essential to achieve food security, improve nutrition and put healthy diets within reach of all. This year's edition goes further to outline six "transformation pathways". These, the authors say, rely on a "coherent set of policy and investment portfolios" to counteract the hunger and malnutrition drivers.

Depending on the particular driver (or combination of drivers) confronting each country, the report urges policymakers to: