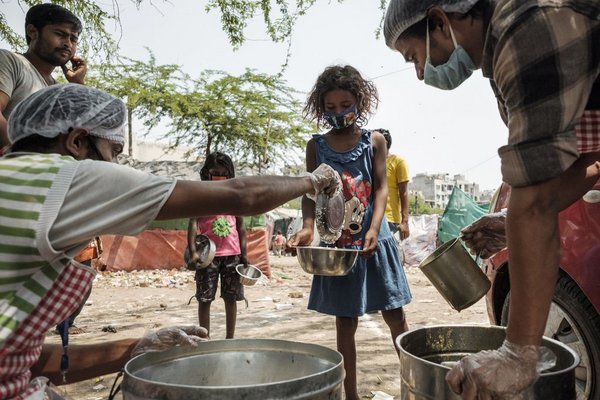 At the end of March 2020, the Indian government imposed a lockdown in the wake of the Corona pandemic. Millions of day laborers and seasonal workers lost their income.
Photo: © Welthungerhilfe

Famines are on the increase

Wars, climate change, and the coronavirus lead to bitter setbacks in the fight against hunger, according to Welthungerhilfe Annual Report.

“In many of our project countries, the pandemic has dramatically worsened conditions for people”, states Marlehn Thieme, Chair of the Board of Welthungerhilfe at the release of the Welthungerhilfe 2020 Annual Report in late June 2021.

According to current UN figures, 41 million people around the world are living on the edge of famine and risk starvation if they do not get swift survival aid. Armed conflicts such as those in the crisis region of Tigray in northern Ethiopia, and droughts lasting years such as the drought in southern Madagascar, have devastating consequences especially for the poorest families.

“The coronavirus has mutated into a virus of hunger, and women and children in particular are suffering most as a result. Girls are being married off young, and many children are not going back to school because they have to earn money. Climate change poses an existential threat to families in Africa. In Madagascar there have been droughts, and in East Africa massive floods have destroyed farmland and herds of cattle, and with them the livelihoods of smallholders. People have no reserves left”, Thieme says.

But the review of the last year also shows how much could be achieved, despite all the difficulties. The German public showed an extremely high level of solidarity and willingness to help in 2020, Welthungerhilfe states. The organisation received one of the highest amounts of donations in its history and was able to support more than 14 million people.

Mathias Mogge, Secretary General of Welthungerhilfe, points out that private donations are an important stimulus to press on with the fight against hunger and poverty. “Current reports from the countries where we work are alarming”, he says. “Food prices are rising steeply, economic development has been set back years because of the lockdowns and interruptions in trade routes, and many families have run up serious debt. In many countries, people are battling the effects of several overlapping crises, and hunger is increasingly being used as a weapon in war zones.”