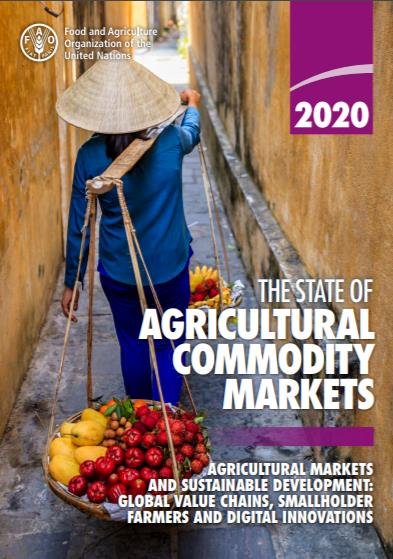 The State of Agricultural Commodity Markets, 2020

Exports from emerging and developing countries are on the rise, this report states. Increased efforts are needed to include smallholder farmers in modern food value chains to boost their incomes.

Global trade in food and agricultural products more than doubles in last two decades, amounting to USD 1.5 trillion in 2018, according to the report The State of Agricultural Commodity Markets, 2020 (SOCO 2020) published by the Food and Agriculture Organization of the United Nations in September 2020.

Nevertheless, the 2008 financial crisis and consequent economic slowdown stalled the evolution of agri-food global value chains, and the COVID-19 pandemic could further disrupt their potential in global trade and growth.

Developing countries' exports are on the rise

Emerging and developing countries' exports are on the rise and accounting for over one-third of the world's total, the report states.

While countries in Europe and Central Asia, and East Asia and the Pacific tend to trade within the same regions, countries in South Asia, Latin America and the Caribbean, sub‑Saharan Africa, North America, and the Middle East and North Africa trade more globally. About 90 per cent of exports in agricultural commodities from sub-Saharan Africa, and Latin America and the Caribbean are destined for other regions.

The authors argue that global trade and well-functioning markets lie at the heart of the development process, as they can spur inclusive economic growth and sustainable development, and strengthen resilience to shocks.

The report estimates that about one-third of global agricultural and food exports are traded within a global value chain, and cross borders at least twice.

The rise of global value chains is driven by income growth, lower trade barriers and technological advancements, which have transformed markets and trade processes, linking farmers to traders and consumers across regions and countries.

The report makes the case for the role agri-food markets can play in fostering sustainable development. It argues that the promotion and wider application of voluntary sustainability certification schemes and standards in agriculture, for example, can address trade offs between economic, environmental and social objectives.

For instance, according to data from smallholder coffee farmers in Uganda, sustainability certified families spend 146 per cent more on child education and keep children at school longer than non certified families.