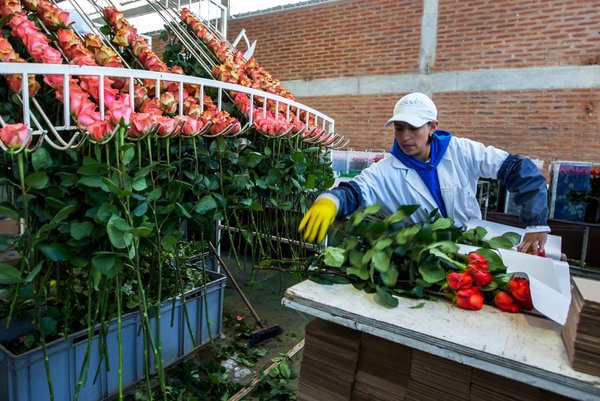 A worker on a rose plantation in Ecuador getting roses ready for world-wide export in the processing factory.
Photo: Shutterstock

In early March, the German Federal Government adopted a draft “Law on Corporate Due Diligence in Supply Chains”. The so-called due diligence law creates legal certainty for business and strengthens human rights compliance in the business sector.

Millions of people world-wide are living in poverty and misery because social minimum standards such as the ban on forced and child labour are not observed. Globally, 75 million children are working in exploitative conditions in textiles factories, quarries or coffee plantations.

In order to change this state of affairs, the German Federal Government has agreed on a draft supply chain law which was adopted by the Federal Cabinet on the 3rd March 2021.

The aim is to improve the protection of human rights in global supply chains. Here, according to a press release of the Federal Ministry for Economic Cooperation and Development (BMZ) the goal is not that of introducing German social standards throughout the world but the observance of fundamental human rights standards such as the ban on child and forced labour.

The BMZ stresses that businesses also hold responsibility for this, emphasising that they have to see to it that human rights are observed in their supply chains. The law lays out clear and enforceable demands regarding corporate due diligence, thus creating legal certainty for businesses and those affected.

In accordance with the communiqué of the 3rd March, the law commits businesses from a certain size on which are located in Germany to improve meeting their responsibility in the supply chain regarding the observance of internationally recognised human rights by complying with human rights due diligence. This is aimed simultaneously at strengthening the rights of people affected by business activities in the supply chains while taking the legitimate interests of businesses regarding legal certainty and fair competition into account.

Businesses hold responsibility throughout the entire supply chain, with corporate due diligence graded according to the degree of influence a business has. The elements of human rights due diligence initially apply for the businesses themselves and immediate suppliers.

In future, those concerned will have the option to be represented by non-governmental organisations and trade unions in German courts and confer actions to them if they feel themselves harmed by violations of corporate due diligence regarding legal positions of overarching importance.

A basis for a common international understanding of due diligence

The BMZ communiqué stresses that the supply chain law creates the foundations for a common international understanding of due diligence, and that it will contribute to harmonising the legal requirements for corporate due diligence and shape the debate over EU legislation.

A monitoring authority is to see to the enforcement of the legal requirements. For this purpose, Germany’s Federal Office for Economic Affairs and Export Control (BAFA) is to be given the mandate to provide business with concrete information regarding the implementation of regulations while simultaneously acting as a controlling agency.

For more information:
BMZ information paper on “Lieferkettengesetz” ( in German)