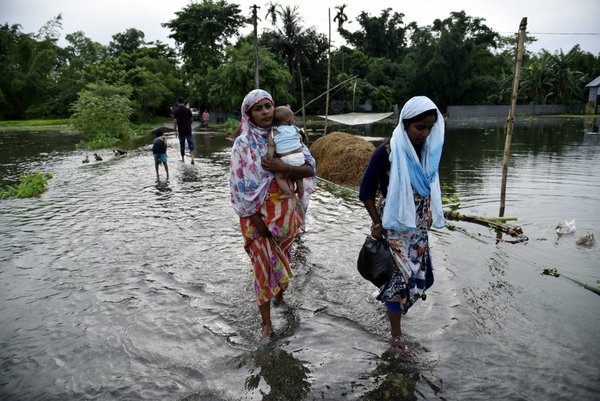 Millions of people around the world are displaced from their homes every year due to severe weather caused by climate change.
Photo: ©Talukdar David/Shutterstock

The risk of flood-related displacement

Floods, which are influenced by climate change, are a major driver of displacement. A new study helps to understand how the risks are changing and evaluates future displacement risks due to flooding from rivers overflowing their banks.

Climate change significantly increases population displacement risk. The scale of its impact on future displacement risks is evaluated in a study by an international research team led by the Weather and Climate Risks Group at ETH Zurich and published in March 2021. It shows that the risk of people being forced from their homes by flooding increases by half for each additional degree of global warming.

Every year, millions of people around the world are displaced from their homes due to severe weather caused by climate change. According to the International Red Cross and Red Crescent Movement, 10.3 million people were displaced as a result of climate-related events in the last six months alone – four times the number displaced by war and conflict in the same period. One of the main causes of displacement is flooding. A recent example is the situation in eastern Australia, where tens of thousands of people are having to flee their homes to seek safety from this hundred-year flood.

If the population remains stable at its current level, the risk of flood-related displacement increases by more than 50 per cent (relative to 2010 levels) for each degree of global warming.

However, the world’s population is growing. Even if this growth continues towards a more sustainable path, the risk of displacement will still increase significantly: assuming that the world meets the Paris Agreement’s goal of limiting global warming to a maximum of 2° Celsius, the globally averaged risk is projected to rise by up to 110 per cent by the end of this century.

Nevertheless, under “business as usual” climate-change conditions and if the gap between rich and poor continues to widen, the risk is projected to increase even more dramatically. For this scenario, the researchers calculated that the risk of displacement due to flooding would be up to 350 per cent higher.

According to the study’s authors, it is not yet too late to address and manage the risk of flood displacement through spatial and urban planning measures and protective infrastructure such as dams.

Read more at the ETH Zurich