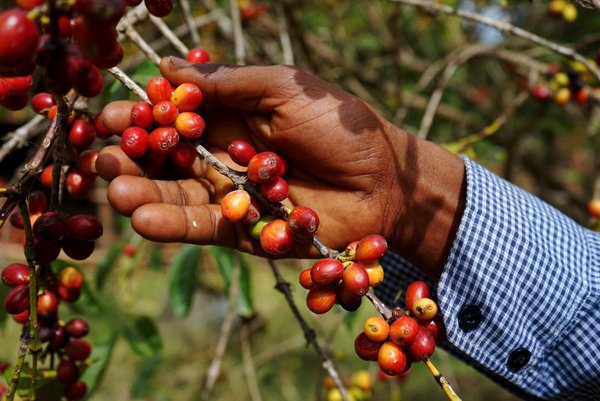 An Ethiopian farmer shows his coffee cherries. Conditions for growing high-quality coffee in Ethiopia could get far harder in future.
Photo:©Sarah Lois/Shutterstock

Researchers looking at the specific effects climate change has on Ethiopia have found that areas suitable for producing high quality specialty coffee are likely to shrink. This could have dramatic impacts for farmers living in a country whose coffee exports account for roughly a third of all agricultural exports.

Ethiopia, Africa's largest coffee producing nation, may produce less specialty coffee and more rather bland-tasting varieties in the future, researchers from PIK stated in April 2021. This forecast is relevant both for the country's millions of smallholder farmers, who earn more on specialty coffee than on ordinary coffee, as well as for baristas and coffee aficionados around the world.

Under various scenarios the researchers looked at how a total of 19 climatic factors will affect the cultivation of five distinct specialty coffee types in the future, including mean temperature, annual rainfall levels, and seasonality. For example, if it gets warmer, the coffee cherry matures faster than the development of the bean, which in turn leads to coffee that is lower in quality. Increased rainfall, on the other hand, favours coffee production in general but may not necessarily be beneficial for individual specialty coffee types.

Thus, while the researchers project that the area suitable for four out of five specialty coffee types will decline, some will be hit harder than others. For example, the renowned Yirgacheffe type, one of the world’s oldest and most sought-after coffee types cultivated in Ethiopia’s southwest, could, under the worst-case scenario, lose more than 40 per cent of its suitable area by the end of the 21st century.

This would not only affect coffee drinkers worldwide, it would also have consequences for Ethiopia’s economy. If one or more coffee regions lose their specialty status due to climate change, smallholder farmers in the region would be forced to switch to growing conventional, less palatable and bitter coffee types and have to compete with industrial production systems elsewhere that are more efficient.

The researchers underscore the importance of localised adaptation planning and responses to confront and mitigate this trend. They explain that as distinct specialty coffee types are strongly influenced by different local climatic, spatial and soil-related factors, adaptation measures tailored to each specific region are needed.