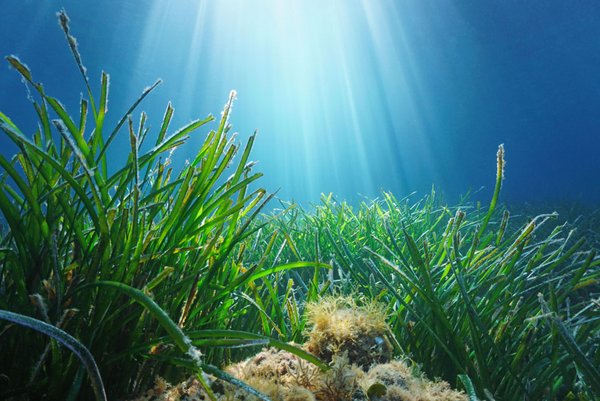 Seagrasses can absorb CO2. When the plants die, the CO2 gets stored in the sediment.
Photo: ©Damsea/Shutterstock

The reforestation of mangrove forests and the regeneration of saline and seagrass meadows are grouped under the term “blue carbon methods”. These methods were originally meant to serve coastal protection and restoration of valuable ecosystems. As they are nature-based, they are now considered by many scientists to be among the most vital measures to combat climate change.

Seagrasses absorb CO2 in order to develop their tissue. When these plants die, they become deposited in the sediment of the seabed. This is how a portion of the carbon dioxide which the plants originally absorbed from the air is stored in the sediment.

However, some seagrass meadows release more carbon dioxide into the atmosphere than they store, according to the new study. This surprising insight is enormously important for correctly calculating the actual climate protection potential of seagrass meadows in the future. Many chemical processes that take place in the plants and in the sediment have been neglected so far by other experts when calculating carbon dioxide uptake, the researchers say.

In the warm tropical waters, however, this does not work so smoothly. The metabolic processes of the seagrass plants convert the dissolved carbonates to lime when it is warm. This lime then trickles to the seafloor. This results in the loss of carbonate, which would otherwise bind carbon dioxide. The result is that these seagrass meadows bind hardly any carbon dioxide. On the contrary, they tend to release carbon dioxide through various other biochemical processes, the researchers explain.

As nations search for ways to meet their carbon reduction targets under the Paris Agreement, talk of CO2 offsets under blue carbon schemes appears promising to many. However, lead author Dr Bryce Van Dam from the Helmholtz-Zentrum Hereon says: “We cannot rely on blue carbon offsets to counteract the CO2 that we put into the atmosphere by burning fossil fuels. Rather, we must first reduce CO2 emissions and then protect these coastal habitats for the many financial and environmental benefits they offer us, which may not always include CO2 sequestration.”