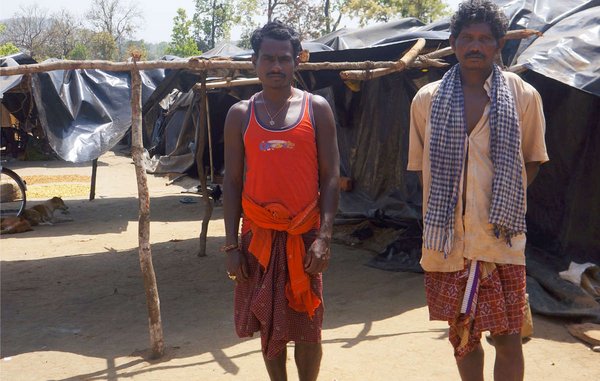 These Khadia men were thrown off their land after it was turned into a Protected Area. They lived under plastic sheets for months. Millions more could face this fate if the 30 per cent plan goes ahead.
Photo: © Survival

Leading NGOs including Survival International and Amnesty International have released a joint statement in the run-up to December’s COP15 on biodiversity, denouncing the planned target of protecting 30 per cent of Earth by 2030 (“30x30”). In the statement, the organisations warn that “without serious overhaul, the so-called 30×30 target will devastate the lives of Indigenous peoples”.

They go on to say it will also “be hugely destructive for the livelihoods of other subsistence land-users, while diverting attention away from the real drivers of biodiversity and climate collapse”. Besides Survival and Amnesty, the other signatories are Minority Rights Group International, and Rainforest Foundation UK.

The statement outlines the key concern that “the likelihood is that exclusionary Protected Areas will make up the bulk of the [30×30] target”. Such areas, “which are the cornerstone of mainstream, western-led conservation efforts, have led to widespread evictions, hunger, ill-health and human rights violations, including killings, rapes and torture across Africa and Asia”.

The organisations call for any conservation targets included as part of a new Global Biodiversity Framework to “give priority to the recognition and protection of collective and customary land tenure systems of Indigenous Peoples”, “recognise the rights of other subsistence land-users to be protected from forced evictions” and more.

Fiore Longo, head of Survival’s Decolonize Conservation campaign, said: “The idea that 30×30 is an effective means of protecting biodiversity has no basis in science. The only reason it’s still being discussed in the negotiations is because it’s being pushed hard by the conservation industry, which sees an opportunity to double the amount of land under its control. Should it go ahead, it will constitute the biggest land grab in history, and rob millions of people of their livelihoods. If governments are really meaningful about protecting biodiversity, the answer is simple: recognise the land rights of Indigenous peoples.”