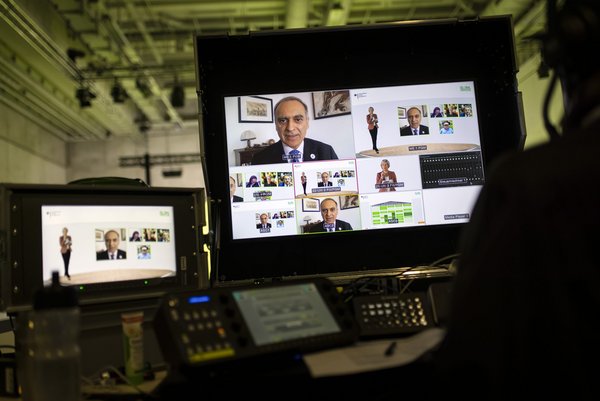 GFFA 2021: Food security in times of pandemics and climate change

How can food systems emerge strengthened from the COVID-19 pandemic and become more climate-resilient? And how can the agricultural sector contribute to preventing further pandemics? These are issues being addressed at this year’s Global Forum for Food and Agriculture (GFFA).

According to the Food and Agriculture Organization of the United Nations (FAO), just below 690 million people did not have enough to eat in 2019. Owing to the COVID-19 pandemic, this figure may have risen by more than 130 million people in 2020, the World Food Programme (WFP) estimates. In order to prevent the impacts of the pandemic resulting in a further increase in the number of those going hungry and more rural poverty in conjunction with progressing global warming, joint action is required world-wide. Just what this can look like will continue to be discussed at the 13th Global Forum for Food and Agriculture (GFFA) until the weekend.

During the kick-off event Pavan Sukhdev, President of the World Wide Fund for Nature (WWF International), called for a reassessment of food systems. Instead of measuring them exclusively by their productivity, i.e. by yield per hectare, as is the case today, other important parameters such as their employment potential or their contribution to conserving biodiversity had to be considered.

Sukhdev called on governments to remember that small-scale farming was the single biggest factor on the way towards sustainable food systems. The 1.1 billion smallholders accounting for more than 70 per cent of world-wide food production had to be enabled to produce their yields sustainably. In addition, there had to be guarantees that they were receiving fair prices for their produce, and that their production risk, for instance regarding climate change, was reduced.

Referring to a positive example of sustainable agricultural production, the WWF President mentioned the system of community-managed natural farming, to which around 70,000 farmers and farmworkers in the Indian Federal State of Andhra Pradesh had so far shifted. The system is based on regenerative agriculture, in which soil health is improved through organic fertilising. This had led to considerable increases in yield and income among the small-scale farmers. The second key element of the approach is training master farmers who take the concept to their communities and are offered financial incentives for this purpose. “Most of these master farmers are women,” Sukhdev stressed, referring to an important socio-economic effect of the approach.

Sunny Varghese, Chair of the World Business Council for Sustainable Development (WBCSD) and CEO of the food and agri-business company Olam International, called on the business world to pay a premium on sustainable agriculture. In 2020, his enterprise, in whose value chains more than five million small farmers are involved, invested around 300 million euros for production without deforestation together with social standards such as banning child labour and fair prices for producers.

Farmers had to be enabled to produce in a manner keeping their activities within the planetary boundaries and not overstretching the natural resources. Digitisation could help here. One example which Verghese referred to was a platform which Olam International provided for farmers offering them personalised crop care advice and services. Furthermore, the company had equipped the orchards of its contract farmers with internet humidity sensors, optimising irrigation and thus raising water efficiency by around 22 per cent.

Ensuring the true operationalisation of the One Health approach

The Director-General of the World Organisation for Animal Health (OIE), Monique Eloit, stressed the influence of pandemics on food chains. The spill-over of diseases from animals to humans was a ticking time-bomb which could only be countered with a One Health approach. Here, it was important not to just launch programmes but also to provide support to countries to implement them, for example through training and information programmes. Dialogue with local farmers and communities to make them aware of how zoonoses are spread was also crucial. The One Health approach must not be a mere response to the ongoing Covid-19 pandemic but had to be implemented on a lasting basis, Eloit maintained.

“We have a lot of knowledge which we can build upon,” emphasised Agnes Kalibata, the UN Secretary-General’s Special Envoy for the 2021 Food Systems Summit. What counted now was to achieve scale. At the Food Systems Summit, which is to be organised by the United Nations in autumn 2021, one would seek to agree on corresponding measures. After all, food systems are human-made – a simple but nevertheless fitting insight from the discussions. So we are able to influence them.

Background
The Global Forum for Food and Agriculture (GFFA) has been held at the International Green Week Berlin since 2009. Representatives from politics, business, science and civil society meet at the several-day conference to discuss urgent world food issues. As a rule, the conference is held in the context of the International Green Week in Berlin/Germany; this year’s virtual event from the 18th to the 22nd January is being run under the motto “How to feed the World in times of pandemics and climate change?”

The participants can follow discussions in 17 expert panels and two high level panels and communicate with the panellists via the Chat facility. Young scientists are presenting their innovative solutions in a Science Slam. The Conference traditionally closes with the International Conference of Ministers of Agriculture, in which ministers from around 80 countries and representatives from 14 international organisations will participate this year.