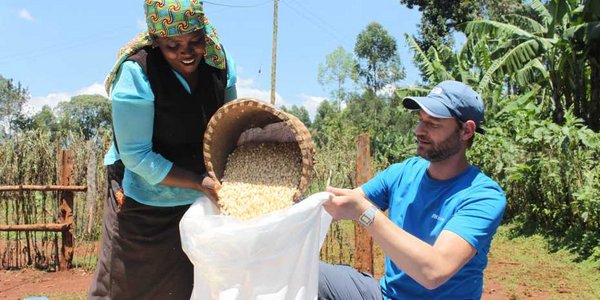 As the end of the lean season approaches, things get tricky for many smallholder farmers in sub-Saharan Africa. It’s the time of year between harvests – the last one was a long time ago, but the next one is not yet due. Supplies are running low, diminished not only by consumption but also by pests. In western Kenya, where corn is a major crop stored on the farm where it is grown, about a quarter of the entire harvest ends up spoiled in this way. If the lean season drags on, food prices shoot up and famine becomes a real threat.

It’s clear that optimised crop storage could help improve food security. In a research project spanning several years, the Swiss ETH Zurich and the University of Zurich, both in Switzerland, as well as the international research centre ICIPE , based in Kenya, are currently investigating how the application of a new technology can help change the situation. As part of the study, in late 2019, several thousands of smallholder farmers in western Kenya were given airtight storage sacks designed to prevent fungal infestation of their crops. They also received training by the research team. A control group continued to store their corn in conventional polypropylene sacks.

What sets the study apart is the survey method. Since mobile phone use is very high in Kenya, as is the case in many African countries, the researchers contact the farmers via text messaging at frequent, regular intervals to survey their food situation.

Following the outbreak of the COVID-19 pandemic, food insecurity was lower in the farming villages that received the upgraded technology than in the control group. After all, the virus and associated measures had created an economic shock for sub-Saharan Africa following the government-imposed closure of markets, restrictions on people’s mobility and suspension of free meals for schoolchildren.

In their preliminary study, published in the journal Global Food Security in January, the researchers show that consistent use of hermetically sealed storage sacks would have significantly improved rural populations’ resilience to crises.

According to an extrapolation of the survey results, of the 1.6 million people living in the Kenyan province studied, some 600,000 had already been facing food insecurity prior to the outbreak of the pandemic. The virus pushed a further 120,000 people into this situation. If farmers throughout the province had used hermetically sealed sacks to store all their yields, the number of people facing food insecurity would have actually dropped by 70,000.

The Swiss Agency for Development and Cooperation (SDC) and ETH for Development (ETH4D) are among the agencies supporting the research team. Thomas Bernauer, ETH Professor of Political Science, is involved in the project and explains that research in the fight against hunger has so far focused primarily on production, in other words on increasing crop yields. However, the study in Kenya shows that there is also great potential to make a difference in the post-harvest period. Another finding, Bernauer continues, is that there are low-cost technologies that greatly promote food security, even in extreme conditions such as those that followed the outbreak of the pandemic.

Much more effective than financial aid

Including the cost of training, the airtight storage sacks cost only about 20 US dollars per household – considerably less than direct financial aid. This is shown by a comparison with another study from Kenya in which a random selection of smallholder households received a lump sum of 500 US dollars. This financial support reduced the likelihood that they would face food insecurity by about five to ten per cent, a result similar to that of the hermetic bag scheme, but at a much higher cost.