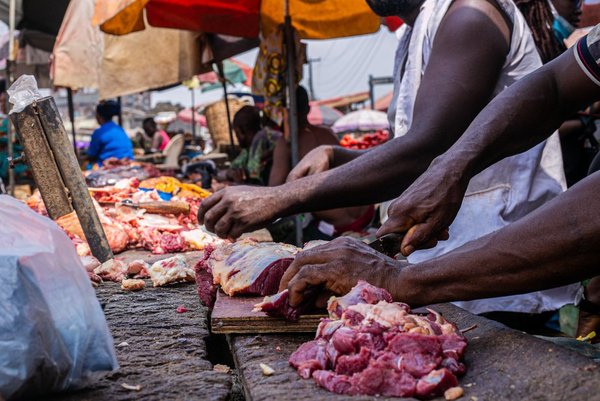 Meat sellers at a market in Lagos State, Nigeria: Banning wild meat from diets could increase the risk of protein deficiencies.
Photo: ©shynebellz/Shutterstock

Removing wild meat from food systems could create risks for nature and for human health. Expanding animal agriculture to replace wild meat could increase biodiversity loss, according to experts.

A ban on the trade of wild meat would not only increase food insecurity for some countries and marginalised groups but also damage biodiversity, according to a study published in Current Biology in February 2021.

International attention on wildlife trade has increased during the past year due to the COVID-19 pandemic. Calls to ban the trade and consumption of wildlife to protect public health and biodiversity appeared as the earliest cases of COVID-19 were linked to a “wet market” — a market selling fresh produce — in China.

Researchers assessed the hypothetical negative impacts of such a ban on the food systems of 83 countries, to enable legislators and governments to consider the potential unintended consequences of this policy intervention. Their study conservatively estimated how much protein would be lost from diets if a ban on wild meat was introduced and fully enforced, as well as the amount of agricultural land needed to replace this through livestock production, based on available global datasets.

Removing wild meat from food systems could drive increased livestock production, according to the researchers. Latin America, sub-Saharan Africa and the USA are estimated to face the greatest threats to natural habitats and biodiversity from expanding animal agriculture to replace wild meat. These regions are also home to some of the world’s most threatened species.

The USA and Nigeria are estimated to require over 10,000km² of land to replace wild meat with domestic livestock, while Brazil, Colombia, Ethiopia, Ecuador, Côte d’Ivoire, Bolivia and Venezuela would need 5-10,000km² each. Globally, over 250 species could be driven towards extinction, with more than 85 species destined for extinction in Ecuador and more than 40 in Colombia.

The study also showed that wildlife bans would have unequal impacts on food insecurity, with major risks for countries already in the bottom 50 per cent of the global food insecurity index. The countries facing the highest risk of protein deficiencies due to the loss of wild meat from diets are all in sub-Saharan Africa, including the Republic of Congo, Rwanda, Zimbabwe and Côte d’Ivoire.

The authors emphasise that the ‘real-world’ impacts of any prohibitions would ultimately depend on the ecological and socio-economic context in which they are implemented. For example, while the food system in the USA could adapt overall, particular rural and marginalised groups there could face severe shocks; whereas in places where suitable alternatives are lacking, such as Madagascar, people may simply refuse to comply. Conservation activities that rely on income from hunting permits could also be undermined.

Read more at the website of the Oxford Martin School