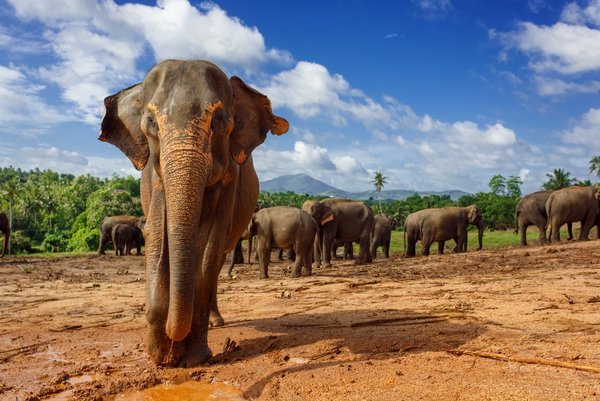 An elephant herd in Sri Lanka – Asia is home to many of Earth’s most charismatic animals.
Photo: ©DarAnna/Shutterstock

Protected areas are one of the most effective tools for safeguarding biodiversity, but most Asian countries failed to achieve a global minimum target of protecting at least 17 per cent of land by 2020.

Most Asian countries lag far behind in meeting targets for protected areas, according to a study published by the University of Oxford in late November 2022. Ahead of the 15th meeting of the parties to the UN Convention on Biological Diversity (COP15), the authors of the study have made recommendations on how Asian countries can meet the new 2030 targets.

Asia is one of the richest places on Earth for biodiversity and hosts many of the world’s most charismatic animals, including the giant panda, the snow leopard and the Asian elephant. In many areas, however, these species are threatened by some of the world’s highest rates of habitat loss, driven by rapid population growth.

To counter the global biodiversity crisis, at COP10 in 2010, almost 200 countries pledged to protect at least 17 per cent of their terrestrial environments by 2020 (Aichi Target 11). Asia has performed the worst in meeting this target, with just 13.2 per cent of land designated as a protected area in 2020 (compared with a global average of 15.2 per cent), and results indicate that longer-term targets will be missed by an even greater margin.

Only 40 per cent of Asian countries achieved a minimum of 17 per cent coverage for protected areas by 2020. Very few countries in West and Central Asia in particular achieved the target.

The study’s authors found that countries with a higher proportion of agricultural land in 2015 had a lower protected area coverage in 2020. This may imply that rapidly expanding agriculture is hindering the establishment of new protected areas.

Almost all Asian countries will fail to meet the 2030 target of 30 per cent protection unless they increase the rate at which they establish protected areas by up to six times, according to the researchers. On the current trajectory, Asia as a whole will only achieve 18 per cent coverage by 2030. The outlook is worst for West and South Asia, which are projected to achieve 11 per cent and 10 per cent coverage respectively by 2030.

Despite the bleak overall outlook, the study identified some success stories among Asian countries. Nepal, for example, increased its coverage of protected areas by almost 40 per cent between 2010 and 2020. Nearly 24 per cent of the country is now under protection.

The findings are particularly significant in the run up to COP15, which is taking place in Montreal, Canada in December 2022. At this meeting, government representatives will review the achievement of the Aichi Biodiversity Targets and discuss strategies for meeting the post-2020 Global Biodiversity Framework targets.

The authors of the study have made three recommendations to support Asian countries in meeting the new 2030 biodiversity targets. The aim is to influence decision-makers ahead of COP15:

•    Documenting and reporting on other effective area-based conservation measures governed by local communities that conserve biodiversity. These can include privately conserved areas or farmlands with a high value for nature.

•    Restoring disturbed landscapes, such as land from abandoned farms and logged rainforests.

•    Strengthening protected areas that cross international borders. Many rare species exist in trans-boundary regions (such as the snow leopard, whose habitat spans twelve countries). However, increasing obstacles at borders threaten their movement.