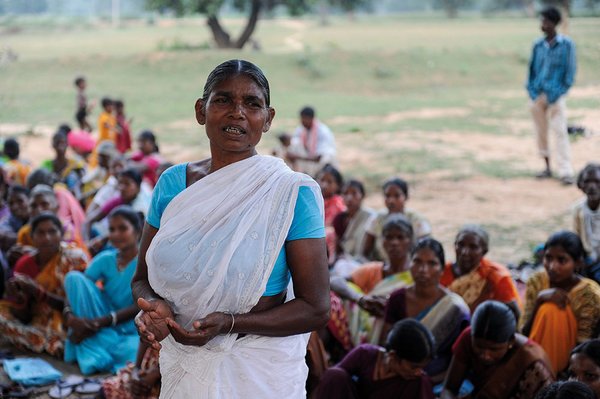 Adivasi in a village in the Indian Federal State of Jharkhand fighting for their land rights.
Photos: Jörg Böthling

“By 2030 protect and conserve through well connected and effective systems of protected areas and other effective conservation measures at least 30 per cent of the planet with the focus on areas particularly important for biodiversity,” the draft monitoring for the post-2020 global biodiversity framework demands. Opinions on this target are divided. The cons.

While the voices for a global “30 by 30” target are getting stronger, so are those raising concerns and asking questions. What do we mean by ‘protected areas’? Where should those protected areas come from? If it is true that these would cause ‘limited human impacts’, does this not increase the pressure on the remaining 70 per cent? And what does the designation of protected areas mean for the people who live there? Most areas are populated, however sparsely, and people depend on them for their livelihoods.

The last question certainly is of highest concern. For many, the quest for increasing their protected area networks relies on the conventional model, that of governance by government (via agencies and services at various levels, as is often the case for protected areas), implemented in some regions in an exclusionary manner which in practice involves or at least tolerates the use of coercion or even violence. People are being mistreated or killed and driven off their land which they previously used to nourish themselves, thereby being dispossessed and driven into hunger and malnutrition. The model case quoted for this is the USA’s Yellowstone National Park, founded in 1872, after the establishment of which over three hundred native Americans were killed and several thousands displaced. According to a recent report of the Rights and Resources Initiative (RRI), a global coalition of more than 150 rightsholder organisations and their allies, between 1.65 billion and 1.87 billion Indigenous Peoples and Local Communities (IPLCs) live in important biodiversity conservation areas, 363 million of whom inhabit existing protected areas – this illustrates the potential dimension of the issue.

Example 1: Central Africa
A study published by Rainforest Foundation UK (RFUK) in 2016 looked at the impacts of setting up 34 protected areas in Central Africa (Cameroon, the Central African Republic, the Democratic Republic of the Congo, Gabon and the Republic of the Congo) on biodiversity and local inhabitants. It found that while poaching persisted and elephant, bongo, gorilla and chimpanzee populations were further declining, the creation of at least 26 of these 34 reserves resulted in partial or complete relocation or displacement, without any compensation, of local indigenous and farming communities present in the area prior to park establishment. Contrary to claims, there is no consultation or participation. Eco-guards hired by the organisations running the site do not shrink from brutal violence in enforcing their policies, and governments do not intervene. There is huge distrust on both sides, who consider each other as enemies and mutually ignore each other’s situation. In some cases, people’s deprivation of their traditional sources of food made it necessary for the World Food Programme to step in and help them. In another case, pygmy people were driven off their land and now are forced to live in a dreary camp and earn their living by poaching – just the opposite of what is intended.

This has led Civil Society organisations in the DRC to develop a position paper with demands for the global biodiversity framework. With regard to draft target 2 on protected areas, they highlight the need to prioritise community-conserved areas before conventional, government-run protected areas, to respect the principle of free prior and informed consent (FPIC) and to identify the possible consequences of a 30 per cent target on the subsistence of IPLCs and to evaluate their impact to compensate for the actions tolerated or made by states.

If solutions following these criteria are found, this would enable the local people to continue foraging in the forests, thereby reducing the pressure on biodiversity in areas outside. This is a key argument for establishing non-exclusive protected areas which has also been voiced by others. In addition, one could hold that the creation of protected areas will be much less of a burden on food production than land-grabbing activities for other countries’ agrocommodities because protected areas often are established in regions which are less suitable for farming, e.g. mountainous regions, wetlands or areas with poor soils.

Example 2: India
India is home to 104 million ‘Adivasi’ or ﬁrst inhabitants. Wherever biodiversity was protected, nurtured and used by them, it was taken over by colonial governments as a source of commercial revenue, and the alienation of IPLCs has been continued by post-independence governments too. IPLCs are treated as encroachers in nearly all of the forest areas in the country protected by law as Reserve Forests and Protected Forests, constituting about 21 per cent of India's area. Five per cent of the country is protected area run in an exclusive manner without involving the historical custodians of biodiversity.

Example 3: Brazil
In Brazil, Indigenous Peoples and other forest-dependent communities have advanced in creating indigenous lands as a category in the constitution. The government is obliged to demarcate these as well as extractive reserves (RESEX) for communities to remain in the forest and survive from non-timber forest products like oils, latex, etc., a result of social activist Chico Mendes’ struggle in the 1980es. They face many challenges, but it is an important step forward.

There is consensus that Indigenous Territories (around 25–30 per cent of the Amazon) ensure forest protection as well as or even better than protected areas like national parks without people. And it is not just that the Indigenous People depend on their territories, it is precisely their intrinsic (non-western) relation with nature which fosters sustainability within their habitat. These protected areas or Indigenous Territories close to the agricultural frontier often look like an oasis in the middle of destruction. However, they are increasingly under threat by the advance of destructive sectors (agribusiness, logging, mining and oil industries) who want to make profits from the forest areas, with the current Bolsonaro administration ensuring their impunity. This destruction is exacerbated by the complete lack of public policies to promote different uses of forests under control of the communities. A “30 by 30” target based on exclusive protection could be an incentive to halt the demarcation of indigenous lands, while still unthreatened lands could be declared exclusive protected areas involving eviction of the Indigenous People there.

Example 4: Europe
The situation in Europe is different. Protected areas, as diverse as they may be, usually are not exclusive, although rejection of protected areas by local people and public decision-makers in general is not uncommon. Other effective conservation measures including Indigenous and community conserved areas (ICCAs) are getting more recognition in the European Union, too. However, despite diverse subsidies being available to landowners, there still are numerous implementation gaps in protected areas, and many species continue to be threatened. Experts agree that a much bigger effort from Member States would be needed to achieve good management of all areas than merely extending the protected area network from the current 25.7 to 30 per cent.

So what can be done?

A “30 by 30” protected area target is seen both as a necessity to save the world’s biodiversity (see "Why conserving 30 per cent of the planet’s land and seas is critical – and how to achieve this" by Georg Schwede) as well as a threat to human rights and biodiversity inside and outside of protected areas. While for some this leads to the issue of not setting a percentage target on protected areas, others, such as the Rights and Resources initiative, suggest the problems raised can be resolved by adapting the global target to ensure that respect for local people’s land rights be a prerequisite for any new conserved area. Either way, the following must be addressed:

These demands are not new but are deeply rooted in the Convention on Biological Diversity (CBD). In 2000, it embraced the ecosystem approach, a strategy for the integrated management of land, water and living resources that promotes conservation and sustainable use in an equitable way. The Programme of Work on protected areas (POWPA), in its element 2, has set detailed targets to promote equity and benefit-sharing and enhance and secure involvement of indigenous and local communities and relevant stakeholders in governing protected areas. An encouraging step in this direction currently has been announced by the US government, although the USA is not a member of the CBD. The “America the beautiful” initiative aims to reach its “30 by 30” target by redefining what constitutes “conserved” land, to make that new definition distinct from, and more comprehensive than, “protected” land, to respect the rights and sovereignty of tribes, and to position local communities and tribal nations as the primary actors to reach that target.

As this article shows, equity and various forms of governance for protected and conserved areas are key for a new “30 by 30” target. But they are not the only aspects that need to be clearly addressed in the new CBD target on protected areas. All the elements contained in the still valid Aichi target 11 need to be reflected in the new one as well:

Friedrich Wulf is a biologist and has been responsible for international biodiversity policy at Pro Natura – Friends of the Earth Switzerland and Friends of the Earth Europe since 2008, as well as being coordinator of the Biodiversity Working Group of the German NGO Forum on Environment and Development. Wulf is active on the issue of protected areas at national, EU, pan-European and global levels and is involved as an NGO representative in the negotiations on a post-2020 framework of the Convention on Biological Diversity (CBD), where issues include the design of a new protected area target and rights-based approaches.
Contact: friedrich.wulf@pronatura.ch

PROTECTED AREAS IN THE CONGO BASIN: FAILING BOTH PEOPLE AND BIODIVERSITY? - https://www.rainforestfoundationuk.org/media.ashx/protected-areas-in-the-congo-basin-failing-both-people-and-diversity-english.pdf