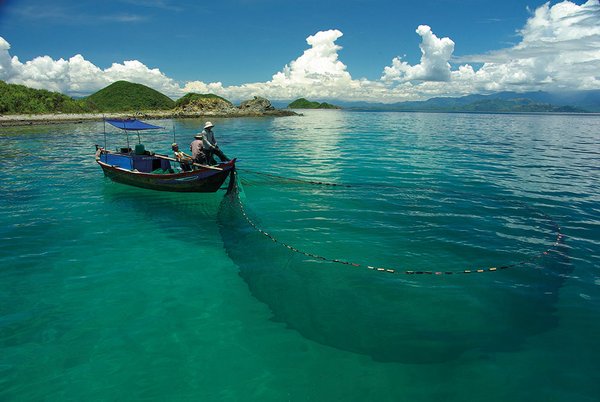 According to IPBES, habitat loss and degradation and overexploitation of the oceans are among the leading causes of global biodiversity loss.
Photo: David Mills/ WorldFish

“By 2030 protect and conserve through well connected and effective systems of protected areas and other effective conservation measures at least 30 per cent of the planet with the focus on areas particularly important for biodiversity,” the draft monitoring for the post-2020 global biodiversity framework demands. Opinions on this target are divided. The pros.

In the negotiations for the new global biodiversity framework (GBF) to be adopted at the 15th Conference of the Parties (COP15), the current draft target two, calling for a significant increase in the extent of protected areas (PAs) and other effective conservation measures (OECMs), has received considerable public and political attention. Parties to the CBD, scientists, economists, NGOs, international organisations, Indigenous People and Local Communities (IPLCs), and other stakeholders are intensely engaged in the debate about extending the area managed for conservation to at least 30 per cent. Many see the current draft target “By 2030 protect and conserve through well connected and effective systems of PAs and OECMs at least 30 per cent of the planet with the focus on areas particularly important for biodiversity”, in short “30 by 30”, as a critical cornerstone of the new GBF.

For the advocates of “30 by 30”, there are four main reasons why adopting this target will be critical: curbing the loss of biodiversity, mitigating and adapting to climate change, providing essential ecosystem services and other economic benefits, and reducing the risk of future zoonotic diseases like COVID-19.

To effectively address the intertwined crises of biodiversity loss and climate change, the scientific community is overwhelmingly supporting “30 by 30”, seeing 30 per cent as the floor and not the ceiling of what the world community has to agree on. A survey of 335 conservation scientists from 81 countries found “very strong support” for conserving even a larger percentage – “in the order of even 50 per cent” – of the planet. It further revealed strong agreement that the former Aichi target 11 of protecting at least 17 per cent of the world’s land and freshwater and 10 per cent of the ocean isn’t enough. To maximise biodiversity, climate and other benefits, scientists are also clear that “30 by 30” needs to be a global target allowing for a strategic focus on ecosystems of global significance for biodiversity conservation and the protection of critical carbon sinks.

In 2019, the Intergovernmental Science-Policy Platform on Biodiversity and Ecosystem Services (IPBES) identified habitat loss and degradation and overexploitation of the oceans as the leading causes of biodiversity loss. In its recommendations to curb further loss, IPBES suggested to expand and effectively manage the current network of protected areas. This recommendation was echoed in the 5th Edition of the Global Biodiversity Outlook in 2020 calling for “major increases” in both the size and effectiveness of protected areas. A 2020 landmark paper in Science Advances stressed that by 2030, we need 30 per cent to be formally protected and an additional 20 per cent designated as climate stabilisation areas to stay below the 1.5°C global temperature increase and significantly reduce the loss of biodiversity. In October 2020, a UN report estimated that protecting 30 per cent of land in strategic locations could safeguard more than 500 gigatons of carbon while reducing extinction risks of 88 per cent of the species considered. And finally, as part of its five key strategies to mitigate climate change, advert biodiversity loss and make global food systems more sustainable the German Advisory Council on Global Change recommended expanding protected areas to 30 per cent of the Earth’s land area.

The scientific arguments for adopting “30 by 30” have been underpinned by various economic studies. A 2020 report from the University of Cambridge documents that protecting 30 per cent of the world’s land and oceans provides greater benefits than the status quo, both in terms of financial outcomes and non-monetary measures like ecosystem services. It concludes that these benefits outweigh the costs by a factor of at least 5:1. McKinsey recently completed an analysis of the economics of 30 per cent. The authors found that increasing protected areas to 30 per cent would safeguard 30 million jobs in ecotourism and sustainable fisheries, create 650,000 new jobs in conservation management and support 500 billion US dollars of GDP in ecotourism and sustainable fisheries.

The COVID-19 pandemic has brought home the global importance of one of the most critical services that healthy natural areas offer to humanity: a protection shield against the outbreak of new diseases. The IPBES #PandemicsReport looking at the links between pandemic risk and nature describes how the spill-over of new pathogens to humans can be reduced. Recommended measures included the conservation of protected areas and implementing policies limiting unsustainable exploitation of areas high in biodiversity. Another paper published in October 2020 found that effective and equitably managed networks of protected areas “can and should be part of the response to reduce the risk of future zoonotic pandemics”.

The compelling scientific and economic arguments for “30 by 30” have prompted international NGOs as well as a growing number of CBD parties to publicly commit their support of “30 by 30”. In a joint declaration international environmental NGOs, including Conservation International, WWF, The Nature Conservancy, BirdLife International, the Wildlife Conservation Society and others, are calling for “the effective protection and conservation of at least 30 per cent of both land and sea by 2030, including through protected areas and indigenous and community-led approaches”. At the intergovernmental level, more than 60 countries from across the globe have joined the High Ambition Coalition (HAC) for Nature and People. The HAC champions a global deal for nature and people with the central goal of protecting at least 30 per cent of the world’s land and oceans by 2030.

Let’s talk about “how”

In a nutshell, for the supporters of “30 by 30”, the key question is not anymore “whether or not” but “how” it needs to be adopted. Among key aspects currently discussed in the CBD negotiations to address the “how” are qualitative, financial and social and human rights questions. Qualitative features need to ensure the prioritisation of areas most important for biodiversity conservation, climate change mitigation and reducing the risks of further zoonotic diseases. New sites have to be connected, integrated into the wider landscape and managed effectively to deliver their expected benefits for nature and people. Closely related to management effectiveness are financial aspects. Sustainable financing is the biggest challenge of ensuring management effectiveness, in particular in countries of the Global South. Recent estimates assume that managing an extended network of protected areas effectively, sustaining their delivery of biodiversity and ecosystem services benefits, including significant economic and financial contributions, will cost around 140 billion US dollars annually.

Social and human rights aspects are intrinsically connected to the question on priority geographical areas for “30 by 30”. There are approximately 476 million Indigenous People world-wide. Although they make up only six per cent of the global population, Indigenous Peoples inhabit approximately 85 per cent of the areas proposed for biodiversity conservation. IPLCs conservation institutions and local governance regimes have been effective in preventing habitat loss, often more successful than traditional conservation approaches (for example the establishment of purely government-managed conservation areas without involving IPLCs and without these benefiting from possible monetary and non-monetary values). Expanding recognition of IPLC land tenure rights must be seen as an effective, moral and affordable solution for protecting our world and preventing rights violations that have plagued many traditional conservation strategies. Thus, the target of conserving at least 30 per cent of the planet’s land and oceans must explicitly underscore the need to protect Indigenous Peoples’ rights, ensuring free, prior and informed consent and alignment with the UN Declaration on the Rights of Indigenous Peoples (see "Why a 30 per cent blanket target on protected areas is not enough" by Friedrich Wulf).

It has never been more urgent to switch to a transformative path to solve the multiple intertwined crises that put our common future at risk, and it seems evident that the adoption of the “30 by 30” target is an important step which we must take now.

Georg Schwede is the Representative Europe of the Campaign for Nature and is based in Badenweiler, Germany. Before joining the Campaign for Nature in January 2019, he held various Senior Management positions in international conservation and humanitarian NGOs. He earned a PhD and a MSc in wildlife biology from the University of Bielefeld, Germany and the Smithsonian’s Conservation and Research Center, Virginia, USA.
Contact: georg@campaignfornature.com