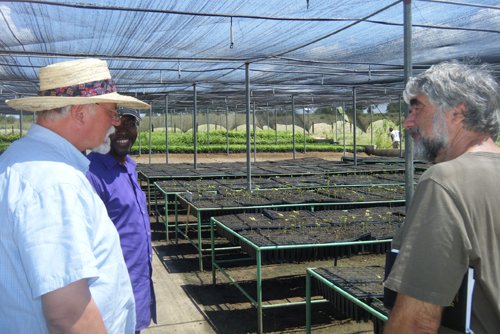 Propagation Centre for Biodiversity in Dosmond, Haiti. From right to left: Dirk Günther, Welthungerhilfe Regional Director for the Caribbean, Marc-Arthur Georges and Eberhard Hauser, both of Welthungerhilfe Haiti.
Photo: © I. Gentes

Tailwind for the Caribbean Bio-Corridor

Welthungerhilfe supports sustainable agro-forestry and the use of alternative energy sources to help make the Caribbean Biological Corridor a reality. Sustainable conservation and better living conditions for the local population are the aim. Implementation is not easy, however, particularly in Haiti where people rely very heavily on wood as a fuel.

The Caribbean islands rank among the regions of global importance for biodiversity. Thanks to their high concentration of biological diversity, the ecosystems of the island groups are acknowledged as one of the world's biodiversity hotspots. In 2007 the governments of Cuba, Haiti and the Dominican Republic agreed that the establishment and organisation of the Caribbean Biological Corridor (CBC) is to be a political priority. Since then, this project has been run under the auspices of their respective environment ministries.

The fragility of the ecosystems on Cuba, the island of Hispaniola and the other island states (especially Jamaica and Puerto Rico) has worsened even further in recent years due to poverty, inadequate planning and unsustainable exploitation of resources. The CBC territories, especially in Haiti, stand out for their high population density per square kilometre, making it essential to compensate for the destructive impacts of human activities on biodiversity and to find alternative models for development and organisation as well as marketing.

The Caribbean Bio-Corridor initiative (see Box at the end of the article) sets out to channel national projects for the conservation of biodiversity, integrate them in a regional approach and support them in the long term. Establishing connectivity between nature reserves is likely to yield potential for regional cooperation, which may come about through technology transfer, through the design of training tools or the transfer of methods for environmental sustainability. Furthermore, the CBC also contributes to two Millennium Development Goals (MDGs): reducing poverty and ensuring environmental sustainability.

In concrete terms, the work of Welthungerhilfe is geared towards putting the rural population living in biodiversity hotspots, particularly in the buffer zones of the protected areas in Haiti and Cuba, in a position to use alternative resources and innovative methods to meet their needs for food, building material and fuels, with the underlying aim of fostering biodiversity. The intention is to combat poverty among smallholder farmers and reduce pressure on the nature reserves. The restoration and conservation of biodiversity is addressed in relation to landscape ecology and regeneration, soil conservation and food security as well as the promotion of alternative energies (above all biogas and solar energy). Welthungerhilfe works closely in situ with the relevant units within the respective environment ministries, known as focal points, and with a network of non-governmental organisations (NGOs) in the three countries. With the help of this South-South cooperation, longer-term institutional benefits will accrue most of all to Haiti, the weakest link in the field of environmental management.

A new awareness is necessary

A further goal over the next few years is to integrate the biodiversity component into existing projects. It is not always easy, though, to raise awareness and get people thinking about sustainable alternatives. Even now, more than 90 per cent of Haitian households still make daily use of wood or charcoal to cook food. Estimates put the annual number of trees felled at more than 50 million, and wood-burning accounted for 72 per cent of total energy consumption in 2011. In rural areas and in low-income households, the share was even higher.
Specific targets for the use of alternative energies are intended to help people manage their natural landscapes better and more sustainably. The construction of biogas plants, determined by the district of Ouanaminthe – in the direct vicinity of one of the priority CBC sites in Haiti, in Dosmond in the north-west of the country – should improve both waste disposal and waste reuse. A second example is the use of solar panels at the Propagation Centre for Biodiversity in Dosmond, which is underpinned by a series of education and information programmes as well as a round table at which local representatives from all sectors plan and agree binding resolutions on the expansion of alternative energy use. A third example originates from the districts of Marigot, Jacmel and Belle Anse in the southern part of the country: here smallholders and their families who farm in the buffer zones and within the “La Visite” and “Forêt des Pins” national parks at the foot of the Massif de la Selle are receiving support to construct and distribute energy-efficient stoves. Supportive primary education and economic measures are aimed at helping families to meet their fuel needs from alternative sources or from outside the protected areas.

A project proposal to conserve biodiversity by increasing agroforestry in the districts of Jacmel, Marigot and Belle Anse, the buffer zones of the “La Visite” and “Forêt des Pins” protected areas, has been submitted jointly with the Haitian partner ACDED to the German Federal Ministry for Economic Cooperation and Development (BMZ), and has been approved. It is expected to have impacts on two levels: on human capacity-building in the countries through initial and continuing vocational education and training, and on retaining the newly acquired knowledge in sustainable institutions. It is important to generate new knowledge in the allied interdisciplinary fields of biological diversity and food security and at the same time to bring about new practices on the social and political levels.

Networking the activity areas of “biodiversity”, “renewable energies” and “continuing education and further training for the rural sector” in Haiti, the Dominican Republic and Cuba, should have positive effects on the population’s food situation, on ecosystem services and on policy-makers. Local governance and the social cohesion of the participating countries will be strengthened as a consequence. Linking up the activities of the CBC initiative with other locally adapted programmes run by Welthungerhilfe should ensure that it is disseminated and accepted and becomes socioculturally embedded among the stakeholders and target groups involved. In terms of content and composition, the network is very flexible in structure: it includes Cuban para-statal organisations from local agricultural development sectors, state research alliances (such as Cuba Solar) on alternative energy use, and independent institutes like BioEco which are active in the restoration and development of protected areas. These are joined by non-governmental organisations (NGOs) from the Dominican Republic with concrete experience in forestry management (CEDAF), environmental education and control measures (Grupo Jaragua), and several local partners of Welthungerhilfe in Haiti (including ACDED and Concert Action) who are working towards the population’s acceptance of the measures.

Numerous challenges still to be mastered

Responsibility passes incrementally to the national partners in the course of activities. This creates a solid and sustainable foundation for the management of the projects in their entirety by the partners in future. Convincing as this sounds, in practice it is not always easy: conservation and development of biological diversity in Haiti is still proceeding without clear targets and in the absence of a stronger presence and control by state bodies in situ. On the government level, no concrete agreements exist on where to allocate and how to weight biodiversity as a transversal theme across the ministries for agriculture, environmental protection and energy.
Added to this, in most districts of Haiti the general public is unaware of the connections between protection and regeneration of natural landscapes, environmental services, innovative income models and health. The CBC initiative is also struggling with one bottom-up approach, namely a “state priority” defined by political leaders in La Habana, Port-au-Prince and Santo Domingo to develop pilot locations in collaboration with district representatives, taking account of citizens’ interests; here the sustainability of the measures is still a challenge. Nevertheless, Welthungerhilfe hopes that by supporting decision-makers, donor organisations and the entire CBC programme it can also help to achieve a new awareness among the wider population.

Bio-corridors and the CBC initiative

Bio-corridors refer to the geographical continuity of habitats in connected ecosystems. Such continuity can be either spatial or functional. Links between habitats are maintained or, where they have been fragmented by natural causes or human development, restored. Bio-corridors promote the diversity of species and give flora and fauna a chance of survival. The initiative to establish a Caribbean Biological Corridor, which originated among Cuban biologists, is being financed for the first few years (2009 to June 2014) by the European Union (EU) and the United Nations Environment Programme (UNDP). Cooperation among the countries is concentrated on three overall goals: environmental remediation, development of alternative resources and livelihoods, and poverty reduction in order to reduce the pressure on biological resources.

The 2009 Action Plan of the CBC and its revision of June 2013 (see http://www.cbcpnuma.org/) give the environmental ministries some scope for action. Approaching the work on a decentral basis, the three countries will integrate over 1,600 km of landscapes, ecosystems, habitats and cultures. Since there are more than 60 protected areas within the CBC, these merit special attention: the governments want more investment to support development and are calling for actions which combine poverty reduction with improved quality of life, education and environmental remediation.

Currently the Caribbean Biological Corridor initiative involves three countries: Haiti, Cuba and the Dominican Republic. But Jamaica and Puerto Rico are already participating with observer status. The first three countries mentioned are acknowledged to be vulnerable to extreme weather events, including hurricanes and tropical storms. All three countries were hit by natural phenomena in recent years, like the tropical storms Isaac and Sandy in September and October 2012. Furthermore, Haiti is still struggling with the rise in its poverty rate, with the massive earthquake destruction of January 2010 and a very slow process of reconstruction, especially of its infrastructure.

The United Nations declared the years 2011 to 2020 the UN Decade on Biodiversity. On 2 May 2011 the European Commission published its own biodiversity strategy, aimed at halting the loss of biological diversity by 2020.