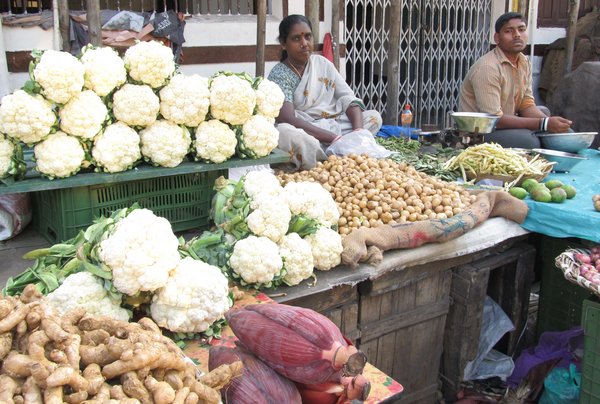 Vegetable vendors sell a combination of products, but more of commonly preferred vegetables than of indigenous varieties.
Photo: Sangeetha Rajeesh

Time to explore the native veggie

Growing indigenous vegetables is on the decline in India – despite increases in vegetable production as a whole. Experts fear that this could have disastrous consequences for the population’s food situation.

According to the Indian Institute of Vegetable Research (IIVR), the country has produced 146.5 million tonnes of vegetables (including roots and tubers) during 2010 – 2011, placing India second globally. Given that Indian vegetable production is threatened by climate change, dwindling natural resources, uneven growth as well as unequal nutritional richness across the country, National Horticulture Board schemes appear to have concentrated more on the development and management of commercial horticulture rather than on encouraging sustainable cultivation of indigenous vegetables. More and more organisations are warning against the negative impacts that this could have on the population’s food situation.

The Asian Vegetable Research and Development Centre (AVRDC) began to work in India in 2006. Its current projects include improving vegetable production and consumption for sustainable rural livelihoods in Jharkhand and Punjab; as well as looking at the possibility of exploiting bitter gourd (Momordica charantia L.) to increase incomes, manage type 2 diabetes, and promote health. Dr. Warwick Easdown, Regional Director of the AVRDC South Asian regional office, says that their three-year old research on a smaller variety of bitter gourd that reduces blood sugar levels is very promising and that they will have confirmed results by end of 2014. “There are several indigenous vegetables that provide specific health benefits. Amaranthus (greens) is one that has four times more protein than cabbage, nine times more iron and 15 times more vitamin A when compared to ‘well-known’ vegetables.” But the stigma attached to indigenous vegetables in India has led to a steady decline in cultivation, Easdown says.

“The ‘well-known’ vegetables are easier to grow, manage and sell, and seed availability is not a problem,” observes Easdown. “By contrast, the native vegetables have always been associated with poverty. They don’t look attractive and therefore never end up in the rich consumer’s food basket.” He warns that there is an urgent need to spread knowledge about the heritage, nutrition and calorie values of traditional vegetables in India and improve their intent beyond local-level markets. Unless money can be made from indigenous vegetable production, they will disappear … and so will traditional cuisine, he fears.

However, this is not the only problem. Professor M S Swaminathan who is Member of Parliament and Emeritus Chairman of the Chennai-based M S Swaminathan Research Foundation (MSSRF) observes that changes in daily diets as a result of disappearing native vegetable varieties are contributing to widespread protein and nutrition deficits. “When I was young,” he recalls, “our diet consisted of a wide range of beans, cucumbers, tuber crops and leafy vegetables, many of which have vanished today.”  He remembers the earlier versions of dishes like avial, a typical South-Indian preparation with at least one dozen vegetables that had a number of indigenous sorts. “This is also gradually disappearing now,” he adds.

Moringa Oleifera or drumstick are indigenous to India and have been a backyard crop for as long as one can remember. The pods and leaves are cooked and served in various forms in the South of India almost every day. “The drumstick leaves are very rich in a wide range of micronutrients, but unfortunately, the National Horticulture Mission only promotes the cultivation and marketing of modern vegetables like cabbage, cauliflower, green banana etc. and does not give attention to the vanishing indigenous vegetable crops,” Swaminathan observes. Research has established the importance of the drumstick tree in combating malnutrition, especially for infants and nursing mothers.

Easdown confides the lack of precise statistics on the list of Indian indigenous vegetables as a whole. There is even less on those near extinction. Many local varieties are grown in backyards, mostly for home consumption and never reach the commercial domain. “India continues to be a huge source of untapped vegetables and perennial indigenous herbs, shrubs and tree vegetables. They are our answers to alleviating hunger and malnutrition plus to improving health,” Easdown adds.
According to N Anil Kumar, Programme Director of the Community Agro-biodiversity Centre, located at Wayanad, Kerala, and functioning under MSSRF, genetic variation in legumes and underutilised vegetables is of prime importance for successful breeding. Therefore, active participation of breeders, i.e. seed companies, is crucial. Researchers should identify the indigenous vegetables based on their agro-diversity and then allow for clear and concise characterisation. “This will help build nutrition literacy among end consumers,” Kumar feels.

From Punjab Makhana or fox-nut seed (thingzang in Manipur), a red, bitter berry called shundakai in Tamil Nadu, to lesser-known greens such as cephalandra, locally called kundru ki bail, Indian pandan, weeds such as gumma and water spinach alongside leaves of chickpea, ash gourd and pumpkin, all need to form part of our daily consumption alongside potatoes, cauliflowers and carrots, the staples across the country.

The need of the hour is research

MSSRF, through their nutritional security programme, encourage backyard nutritional gardens for home consumption. This is done with chilli, drumstick, lemon, papaya and yam to provide nutritional needs of households. The institute has also an integrated community centred approach to address hunger and malnutrition through volunteers within village communities. These volunteers promote local remedies for prevailing nutritional maladies like the cultivation and consumption of drumstick, along with ragi or other locally grown millets. Leafy vegetables that can provide iron and fibre are also promoted

Dr. Anil Kumar of the Community Agro-biodiversity Centre says that under the biodiversity programme, their work is on “strengthening integrated conservation and practical use of genetic resources of neglected and underutilised crops and rare, endemic and threatened plants.” The problem is that for years, the government has done nothing to preserve and promote diversity. “We found that many of the varieties and species have been phased out of the farmers fields due to neglect by the state research and development system. For instance, we discovered about 20 traditional varieties of yam and six to eight of taro on farms largely restricted to home gardens of the Malabar region, Kerala,” Dr. Kumar informs. Preference is given to one or two tuber crops like cassava and potato, and if this continues, all other tubers crops will disappear, he fears. And Swaminathan adds: “By restoring the culture of consuming indigenous vegetable crops, we can make a major contribution to overcoming protein deficiency and hidden hunger. I hope the National Horticulture Mission will also include indigenous vegetable cultivation within its scope.”

Global diversity in vegetable crops is estimated at about 400 species, with around 80 species of major and minor vegetables reported to have originated in India. A recent study published in the open access journal Phytokeys says that the cucumber family (Cucurbitaceae) – pumpkins, melon, cucumber, watermelon, bottle gourds, and bitter gourd – can be traced to India. Molecular data has recently revealed that both cucumber (Cucumis sativus L.) and melon (Cucumis melo L.) are indigenous to India and likely to have originated from the foothills of the Himalayas. Some facts in brief:
India is globally
- the second largest producer of fruits and vegetables,
- the largest producer of mango, banana, coconut, cashew, papaya, and pomegranate and
- the largest producer and exporter of spices.
The country ranks first in the productivity of grapes, banana, cassava, peas, and papaya.
In the year 2012 alone, export growth of fresh fruits and vegetables in term of value is 14 per cent and of processed fruits and vegetables is more than 16 per cent.
In fact, an area of 21 million hectares is under horticulture in India and contributes over 230 tonnes of vegetables to the food basket of the country.