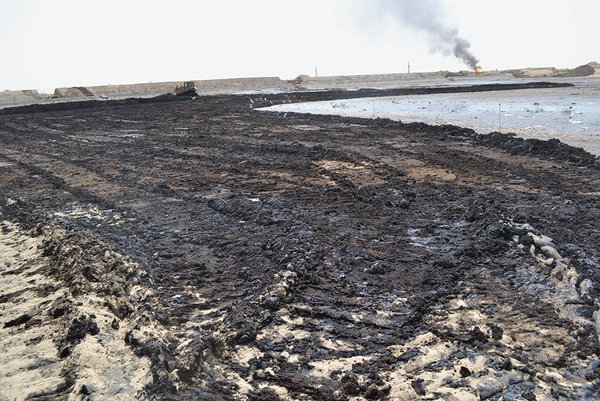 Nearly 7,000 contaminated sites have been identified by the Kuwait Oil Company. Part of the land is now to be remediated through the SEED project.
Photo: B. Bordoloi

Throughout the world, demands on finite soil resources are ever increasing, and can lead to irreversible soil degradation, as the soil is used beyond its “bio-capacity”. A quarter of the inhabitated land area has already been affected by human-induced soil degradation. Against this background, soil remediaton is becoming more and more important. Focusing on the rehabilitation of oil-contaminated soil in Kuwait, the following article shows how it works, and where the problems lie.

Soils and soil biodiversity are the foundation of all terrestrial production systems that generate ecosystem services such as the provision of food, fodder, fibre, clean water and control of greenhouse gases and crop pests. Soil contains an enormous diversity of organisms. Soil biodiversity represents a vast gene pool of potential value to humans, including new antibiotics and use in industrial goods. Soil biota contributes to the delivery of all soil functions and is responsible for global cycles of carbon, water and nutrients.

But this precious resource is always at risk from degradation – by erosion, salinity, contamination, nutrient depletion, desertification, deforestation, overgrazing and other results of mismanagement. Some 17 per cent of the Earth’s land surface has already been strongly degraded, and the area affected is still growing. Soil degradation ranks amongst the greatest environmental challenges, impacting soil micro flora, water, biodiversity and emission of greenhouse gases. The magnitude of this threat starts from local level, but has global implications, bringing in social and political instability and threatening pro-poor growth and food production. An estimated 24 billion tons of fertile soil is lost each year. Human-induced soil degradation has affected 24 per cent of the inhabited land area.

This holds also true for Kuwait. Over 114 square kilometres of Kuwait’s soil was damaged by crude oil released when retreating Iraqi troops detonated 798 oil wells in Kuwait in 1991. The flow of crude oil and seawater used to extinguish the burning oil wells accumulated in depressions in the desert areas, contaminating over 40 million cubic metres of soil. The historical legacy of Oil & Gas Exploration & Production operations in Kuwait has also harmed the natural desert environment, particularly the soils. Around 6,840 contaminated sites have been identified by the Kuwait Oil Company. Typical non-operational redundant polluted features include effluent pits (produced water is disposed), sludge pits (recovered oil from spills/leaks is disposed), contaminated soil piles (oil-soaked soil); gatch quarry pits (for construction purposes), etc. The oil affected soil properties including physical, chemical, and geotechnical properties. Contamination also caused extensive plant and animal mortality, seeped into the soil layers where it reached the freshwater aquifers in Kuwait and continues to impair ecosystem functioning. Hence, it was recommended to remediate the contaminated soil along with clearing these areas of UXO (Unexploded Ordnance) to reduce its impact on the environment or use the contaminated soil for engineering purposes.

In 2012, the SEED (Sustainable Environmental Economic Development) project was launched for remediation of soil in the Burgan Oil Fields, considered to be the world’s second largest oilfield and containing most of Kuwait’s oil. The project, funded by the United Nations, covers remediation of various contaminated features of oilfield properties to acceptable levels and restoring ecological functions of the soil. It aims to remediate approximately 0.9 million cubic metres of soil and 0.16 million cubic metres of sludge and recover 0.8 million barrels of free phase oil by 2016. In total, 25 sites with an average area of 45,000 square metres are to be remediated.

The pre-remediation phase of the project included activities like radiological surveys, UXO/Explosive Ordnance Disposal activities, installation of groundwater monitoring wells for conducting Environmental impact assessment (EIA) studies and site characterisation to estimate the actual volume and type of contamination. The oil and sludge existing in the features posed a challenge for activities like detecting UXO and thus causing delays to dependant activities like site characterisation. In the remediation phase, the project is utilising a combination of technologies like soil washing, thermal desorption, and bioremediation (in-situ and ex-situ) to clean up oil-contaminated soils.

Soil washing technology removes contaminants from soils by dissolving and/or separating, suspending contaminants on soil particles into the wash water and by concentrating contaminants into a smaller volume of soil through particle size separation. Bioremediation uses a consortium of crude oil-degrading bacteria derived from various naturally occurring and non-pathogenic bacterial cultures. Within four months, these biological organisms eat up the contaminants (mostly organic compounds), convert them into carbon dioxide and clean up the surrounding area without any harmful residue or side-effects. In the first two years of the SEED project, more than 36,000 tonnes of contaminated soil was remediated by bioremediation, the target being 200,000 tonnes by the end of the project. Thermal desorption technology utilises heat to increase the volatility of contaminants such that they can be removed (separated) from the solid matrix (typically soil). The volatilised contaminants are then either collected or thermally destroyed. The Thermal desorption units currently used remediate about 20–30 tonnes of soil per hour. Around 0.8 million cubic metres of contaminated soil is to be remediated through the thermal desorption and soil washing technology. Afterwards, the features are to be backfilled with remediated soil, and native plant species like Astragalus spinosus, Rhanterium epapposum, etc. are to be established to initiate ecosystem recovery, reduce desertification and use the remediated soil for future engineering purposes.

The SEED project has proved successful in repairing damage to the natural landscapes. The project will be able to monitor and compare the effectiveness of various remediation approaches using the established native plant species as performance indicators.

Given ever-increasing global demand for commodities and soil ecosystem services, improving soil management could be a key opportunity for supporting sustainable economic development. Remediation technologies like thermal desorption, soil washing, bioremediation etc. are critical to controlling soil degradation, so that economic and social development can be sustained. With growing pressure on land in the developing world, the economic value of soil remediation is set to increase. However, various problems need to be tackled. In the SEED project, for instance, the enormous quantity of fresh water for the soil washing technology poses a new challenge, and the project struggled to source water in summer months and had to scout for recycled water.

The views expressed herein are the personal views of the authors and are not intended to reflect the views of any organisation.

Accelerating industrialisation, intensified irrational exploitation of mineral resources and its related emissions, long-lasting irrigation with polluted water, atmospheric deposition triggered by human activities and the use of chemical fertiliser and chemical pesticides have all severely aggravated soil contamination across the world. In China, 30 per cent of the usable land is considered contaminated. Soil remediation expenditures in China are predicted to reach 6.4 billion US dollars (USD) per year by 2015 or 15 per cent of the total  USD 40 billion World Site Remediation Market that year. Canada has begun the second phase of a 15-year plan to remediate 22,000 sites of various size and type from small areas of soil contaminated by spilled fuel to very large abandoned mine sites that are contaminated by heavy metals and other toxic substances, requiring USD 7.7 billion. The cost of remediating Canadian soil and water contaminated by petroleum hydrocarbon is estimated at USD 1 billion. The Russian government has allocated USD 620 million for cleanup in three zones designated as nature reserves. Taiwan’s Environmental Protection Agency (EPA) has identified more than 2,000 contaminated sites nationwide to date.

Legislation relating to soil remediation is widespread, and there are efforts at local, national and world level. Fundamental to these regulations are European Union Directives such as the Environmental Liability Directive, the Water Framework Directive and the Soil Framework Directive, Superfund (United States), the Contaminated Land Management Act (New South Wales, Australia) and the Environmental Management Act (Canada).