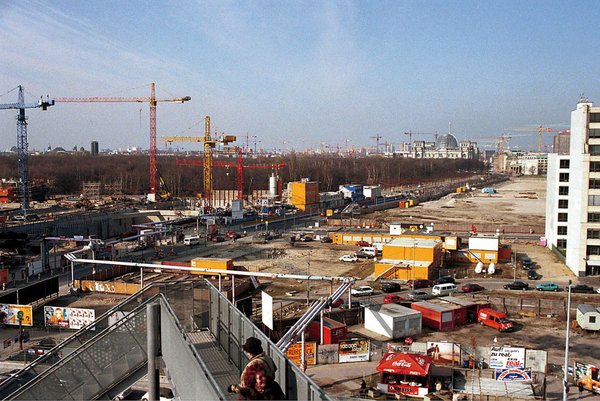 In Europe an area about the size of Berlin is taken up each year for housing or infrastructure.
Photo: Bilderbox.com

Governing the transformation of soils must urgently be improved

We are continuously transforming a resource that is both essential and finite: our soils. We do so in a way that has serious social, economic and ecologic implications. There is an urgent need to shift these transformations to more sustainable pathways. Transgovernance can assume a pivotal role in this regard.

Soils are an essential resource. We produce more than 95 per cent of our food on them, and soils have important water buffering and cleaning functions. They store about 4,000 billion tons of carbon that is roughly ten times more than what the world’s forests accomplish. Soils are not only essential but also increasingly scarce. The global available arable land per capita was cut by half from 1962 to 2008. In the Anthropocene, humankind has become a quasi-geological force. Due to human activities, it is difficult to find any natural soils without any human influence. Nitrogen input through rainfall is only one example. Given slow soil formation rates, soils are a finite resource in human terms. We are losing about 24 billion tons of this finite resource on agricultural lands per year because of wind or water erosion.

Land and soil degradation does not affect drylands only. In Europe, an area of about the size of Berlin is taken each year by the construction of housing or infrastructure. This is particularly challenging, as our cities were often founded on the most fertile soils. Soil contamination – diffuse or site specific – affects various regions. Exclusion and marginalisation processes further exacerbate scarcity of fertile soils. On average, soils across UN regions are more unequally distributed than income in the Republic of South Africa more than 20 years after the end of Apartheid. In some countries, such as Colombia, land distribution is becoming more unequal despite the fact that the country already belongs to those countries exhibiting the highest levels of inequality in land distribution. The situation is even worse when it comes to access to land by women. Across all UN regions, women hold fewer rights to land than men. Irresponsible land governance has increasingly gained international attention since large-scale international investments started to drive people off their land (“land grabbing”).

Ecosystem services of soils are globally important. The provision of food is only one example. In a globalised world, the effects of these degradation processes are likely to spread beyond those areas suffering from degradation. Turning to the areas affected by land degradation, the poor are affected more strongly by degradation processes as they lack the means to respond to them. This is particularly troubling since the poor tend to live on more degraded soils. For sake of clarification only, this is not to say that poor people always degrade land. On a national scale, inequitable distribution of land is correlated with lower rates of GDP growth. Turning to the household level, access to fertile land is a determining factor for people moving out of or falling into chronic poverty. To cut a long story short, we are continuously transforming this essential and scarce resource in a way that has negative social, economic and ecologic implications.

These examples emphasise that the transformation of our soils is poorly governed, if at all. So, how do we move to better governance regimes? The concept of transgovernance is useful here. It acknowledges that new forms and more traditional forms of governance coexist. They influence and might reinforce each other or give rise to tensions (for example, traditional and “modern” forms of land administration). Transgovernance builds on societies’ reflexive capacities as a prime source of and a precondition for change. At the same time, recognising the importance of reflexivity limits the possibilities of outside interventions. Finally, transgovernance acknowledges that 21st-century societies have developed into “knowledge democracies” exhibiting the following characteristics:

More participatory forms of democracy co-exist with representative democracy in ways that are strongly influenced by culture. We are witnessing a growing importance of social media alongside the continuing relevance of more traditional media formats. In Knowledge Democracies, there is increasing awareness of the need to develop knowledge jointly by science and decision-makers in Government, civil society and business. This transdisciplinary approach to science does not diminish the need for disciplinary studies, however. These elements and the relations between them form the conceptual core of transgovernance.

Not only do soils urgently need transgovernance, there are also increasing governance efforts. To give just a few international examples: The FAO has recently founded the Global Soil Partnership that now counts on the support of an Intergovernmental Technical Panel on Soils. The Committee on World Food Security has endorsed the Voluntary Guidelines on the Responsible Governance of Tenure of Land. The European Commission and the Government of Germany are partners in implementing the Economics of Land Degradation initiative. Various national and sub-national initiatives could complement this list. These initiatives also provide a fertile ground for transgovernance. In this regard, the following threads assume particular importance:

Soils must be considered in the nexus

The 2011 Bonn Nexus Conference successfully introduced the nexus concept. Originating from within the water community, the nexus calls for balancing the water demand to increase water, energy and food security. For the responsible governance of the transformation of our soils, nexus thinking is crucial for strategic and conceptual reasons. The strategic reason is straightforward. Despite promising new initiatives, soils do not ride the wave. They do not receive the attention they require. To raise people’s awareness of the importance of soils, it is necessary to demonstrate the linkages between soils and other areas of societal concern such as food security, climate change or water security. Thinking conceptually of soils in the nexus has four dimensions.

Given the high rates of soil loss, transgovernance of soils must devote attention to the mitigation of and the adaptation to soil loss. There is a wide array of sustainable land management (SLM) practices available (see, for example, the World Overview of Conservation Approaches and Technologies). However, the adoption rates of SLM practices remain very low in many cases. To increase SLM adoption, more attention to contextual factors such as access to markets and credits or security of tenure is necessary. This requires localised solutions developed jointly with land users making use of their practical and traditional knowledge and respecting cultural diversity. We will probably also need to start thinking about soil engineering, technological approaches to support (or even substitute) the ecosystem services of soils. The high hopes placed on biochar are only one example in this regard. Soil engineering poses tremendous governance challenges. Which ecosystem service shall be supported? How to distribute the benefits? Taking into account that soil ecosystem services are of global importance, any effort towards soil engineering needs to build on the experiences with adaption to climate change: Those who are in most need of adaptation are often those with the least capacity to make use of adaptation options.

In addressing the soil-related challenges to sustainable development, there are always several pathways of change available. Deciding among them is a highly political task. Transgovernance assumes a crucial role in facilitating a decision process on these pathways. Further, serious implementation gaps characterise sustainability governance in general and the responsible governance of our soils in particular. It is therefore pivotal to not only devote attention to policy design but to address triggers of change and possible ways to support them. Addressing the question of “how change happens” is a hallmark of transdisciplinary work. This requires attention to “politics and power”. Integrated management will involve shifting responsibilities within ministries, while securing land rights of marginal groups in society is likely to involve confronting vested interests. Given the importance of access to fertile soils for the right to food, transgovernance of soils must engage with efforts to broaden and secure access to land for those whose subsistence depends on it. Doing this in a way that pre-empts people’s decision to migrate would run counter to the essentials of transgovernance. However, secure access to land is essential to reduce vulnerability of these livelihoods and to enable them to take choices regarding their future. Learning from and documenting the experiences of civil society organisations assisting people in securing access to land is pivotal here. Often, it is they who have developed feasible strategies for change in adverse policy contexts.

Responsible governance of the transformation of our soils must build on and incorporate the various emerging initiatives on sustainable soil management. To foster the emergence of the urgently needed alliances for change among these initiatives, to contribute to the exchange of knowledge and to raise public and political awareness on the essential roles of soils in sustainable development, a multi-stakeholder platform is necessary. This platform must acknowledge that the exchange of knowledge does not come about in one-shot events. It requires an open and inclusive process for the co-evolution of knowledge between scientists and decision-makers in society. It is against this backdrop that the Institute for Advanced Sustainability Studies, jointly with its partners, has initiated and is co-hosting Global Soil Week (www.globalsoilweek.org). The increasing global awareness on the importance of soils and the growing number of initiatives on sustainable soil management provide a highly fertile ground for responsible governance of the transformation of our soils. We urgently need to make use of this momentum.