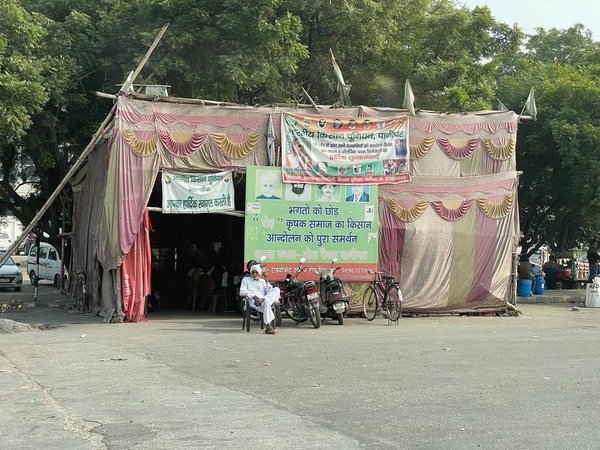 A farmer sitting on a chair outside a makeshift accommodation during the farmers' protests in Delhi.
Photo: ©Athar Parvaiz

When thousands of farmers from the north Indian states of Punjab, Haryana and other parts of the country gathered in New Delhi in November 2020 to protest against the Indian government’s decision to enact new farm laws, no-one had thought they would be able to sustain a year-long peaceful agitation and force the unyielding Indian prime minister, Narendra Modi, to repeal those laws.

In September 2020, when India, along with the rest of the world, was gripped by COVID-19 infections, the Modi-led government passed three bills in the Indian parliament, claiming they were aimed at freeing up pricing, production and agricultural trade through practices such as contract farming. The government asserted that the new laws would allow farmers to choose the buyers for their produce rather than restricting their sale to local government-controlled markets. The laws “will empower small farmers” and fix the system, the government had maintained. But, the agitated farmers vehemently opposed those laws saying they were against their interests, as farmers, particularly the small farmers, would find it hard to negotiate better deals with big companies, and had been passed in haste, without any debate or consulting the farmers.

Yet, as much as the farmers were convinced about the genuineness of their demand for repealing the laws, their decision to put pressure on the government through protests was a very difficult task they had assigned to themselves. After all, Modi had created the image of an ‘unchallengeable’ leader around himself in India – especially after his landslide victory in the 2019 Indian general elections, when he had won a consecutive second term.

Shortly after taking over the reins of power for the second five-year-term, his government made a series of controversial decisions which included passing a new law that allowed granting citizenship to various religious minority communities migrating from India’s neighbouring countries, but not to Muslims, and removing the special status of Kashmir, India’s only Muslim majority state. Modi is effectively using Hinduism, the religion predominantly followed in India, to turn the country into an autocracy.

It is because of the support of religious majority for Modi that he conveniently withstood the pressure put by farmers for a year and was unmoved even by killing of hundreds of farmers during the course of protests, most notably of them who were run over by a Federal Minister’s car.  Earlier in January 2021, India’s Supreme Court had put the implementation of the laws on hold after hearing the petitions challenging the farm laws and had constituted a committee to find ways to resolve the issue.

But nothing substantial emerged out of several rounds of talks between the farmers and the government as farmers demanded a complete repeal of the new farm laws and continued their protest in the face of COVID-19 pandemic and Indian capital’s worst weather conditions in decades – a scorching summer and a harsh winter. The farmers’ courage and determination was also noteworthy as the government had adopted an unbending stance while India’s mainstream media, often accused of being the veritable arm of the government, searched for every opportunity to delegitimise their protest and accused them of being anti-national on certain occasions.

Finally, on November 19th, Modi announced during his address to the nation that his government would repeal the controversial farm laws.

"We couldn't convince [a] section of farmers despite best efforts. We have decided to repeal those three farm laws," he said, adding that the government would complete the process in the winter session of Parliament. The laws were formally repealed on November 29th in the same manner as they had been introduced –  without any debate in the Indian parliament.

“Modi Sarkar (government) wants to push through the 3 farm laws repeal Bill today in Parliament WITHOUT any debate. The passage of the laws 16 months ago was most undemocratic. The manner of repeal is even more so. The Opposition demands a discussion before repeal,” Jairam Ramesh, Indian parliamentarian and an opposition leader, tweeted on the morning of November 29th.

Why did Modi give in?

It was simple politics which made Modi budge, says P. Sainath, India’s foremost commentator on agricultural affairs. According to him, the well organised and largest peaceful democratic protest by Indian farmers the world has seen in years has won “a mighty victory”.

“Modi saw the real significance of the results of by-poll results in the 29th Assembly and three Parliamentary constituencies announced on November 3rd. He knows that some huge defeats have taken place in states where the farmers’ agitation was intense,” Sainath said.

Not only that. Elections are going to be held in March this year in three Indian states – Punjab, Uttar Pradesh and Uttarakhand – all of them with a large farmer population. The prime minister has understood how continued protests of farmers could impact his party’s electoral performance in those states. Some opinion polls have already shown that his Bharatiya Janata Party’s popularity has suffered much damage in states like Uttar Pradesh, and it will be difficult for the party to retain power in that state and the adjoining Uttarakhand.

The farmers’ resolve to carry on protests and the coverage they were getting in the international media had also become an albatross round Mr Modi’s neck.

In the coming months, said Sainath, the BJP government would have to answer the question of whatever happened to the doubling of farmers’ incomes by 2022. “The 77th round of the NSS (National Sample Survey, 2018-19) shows a fall in the share of income from crop cultivation for farmers – forget a doubling of farmer incomes overall,” he commented.

Fifty-eight per cent of India’s 1.3 billion population are dependent on agriculture for their livelihoods, and the south Asian country is among the world’s 15 leading exporters of agricultural products as well as being its second largest producer of wheat, rice, sugarcane and vegetables. But farmers have not been among the happiest people in India. Thousands of them have committed suicide in recent years because of crop failures and rising debts, with as many as 10,000 suicides in 2019 alone as per official figures. It remains to be seen what policies are adopted by Indian government to satisfy the farmers in future.

Athar Parvaiz is a freelance journalist based in Srinagar/ Kashmir, India. Contact