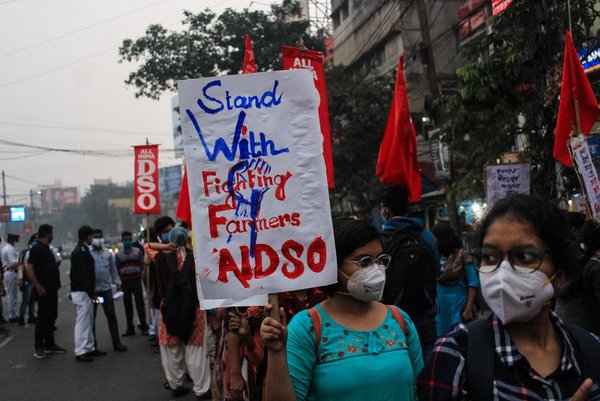 Farmers across India are continuing their protests against a set of new laws which they fear will threaten their livelihoods. Central government insists that the laws are there to boost farming and will not affect the guaranteed price system for crops.

Indian farmers have rejected central government proposals to change farm laws introduced last summer, stressing that they will only settle for a complete scrapping of the new statues. Talks were to have been held a day after the huge nationwide farmers’ strike on the 8th December. Protests have been going on since September, following the government’s announcing reforms it deemed necessary to boost India’s agriculture, and culminated in hundreds of thousands of farmers marching on Delhi in November, blocking roads and clashing with riot police. At the heart of the dispute is farmers’ fear of crop sales being deregulated.

The Indian Government, led by Narendra Modi of the Bharatiya Janata Party (BJP), holds that reforms are necessary to increase the efficiency of the country’s farming sector, which employs nearly half of its workforce but accounts for a mere 16 per cent of its gross domestic product. The three new reform laws, which the Government says will empower farmers, centre on lifting restrictions on corporations buying land and stockpiling commodities beyond a certain level. While regulations guaranteeing set minimum prices are to remain, buyers can bypass markets where commodities are normally sold and strike deals with individual farmers.

The pricing regime is an outcome of the Green Revolution in the 1960s. Progress in technology plus price guarantees helped the country to overcome hunger. Even during the corona crisis, with lockdown measures severely affecting agriculture, India has been able to rely on large food surpluses. The downside of the system is its negative impact on crop diversity and the environment.

Furthermore, it is said to benefit larger farmers, while Swaraj India, a political party founded in 2016 which centres on fighting corruption and backing farmers’ rights, claims that up to 80 per cent of them do not receive the promised amounts under the price guarantee system. Poverty levels are high in the farming sector, and India has one of the highest farmer suicide rates world-wide.

The Government reforms are in line with its general neoliberal approach of striving for more privatisation and encouraging foreign investment. But farmers fear for their livelihoods and are wary of liberalised regulations for buyers. They are also bitter that the reforms were pushed through without their being sufficiently consulted, and at the height of the corona crisis in India. They voiced their anger in a nationwide strike supported by more than 450 farmers’ unions and organisations which saw extra police forces being deployed across the country.

Agriculture Minister Narendra Singh Tomar assured farmers ahead of the planned talks after the strike that the new farm laws would not affect the minimum support price (MSP) for crops. This was also confirmed in a written assurance to farmers, but the deadlock remained, and farmers have now announced that they will block the Delhi-Jaipur highway on the 12th December and stage nationwide dharnas – non-violent sit-in protests – two days later. In a separate move, opposition parties have called on India’s President, Ram Nath Kovind, to persuade the government to accept the farmers’ demands. And after talks with farmers, Digvijaya Singh, leader of Congress, the main opposition party, said that a Joint Parliamentary Committee should be formed to find a solution.