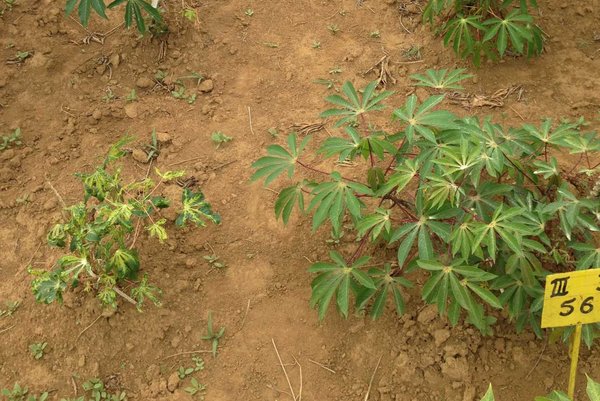 On the left, the picture shows a plant infected by DNA Gemini viruses, which cause cassava mosaic disease, while the plant on the right is healthy.
Photo: © Wilhelm Gruissem / ETH Zurich

Researchers from ETH Zurich/Switzerland, the United States and Uganda have identified the gene responsible for resistance in certain cassava cultivars against the devastating cassava mosaic disease. This is an important step for breeding virus-resistant cassava varieties.

Cassava, also known as manioc, is a staple food for nearly one billion people and an important source of raw materials. It secures an income for smallholder farmers, especially in Africa. Cassava is an undemanding crop; it does not need fertiliser and grows even in dry areas.

However, cassava cultivation is impacted by many pests and diseases. Cassava mosaic disease (CMD) in particular often damages the crop. CMD is caused by DNA Geminiviruses, which are transmitted to plants by sap-sucking whiteflies (Bemisia tabaci) and can destroy entire fields and decimate yields.

Cassava mosaic disease is a particularly severe problem in Africa and India. However, the virus is now also spreading through cassava fields in Southeast Asia. Growers and farmers are in urgent need of CMD-resistant cassava cultivars.

Help may be on the way thanks to a discovery by an international research team led by Wilhelm Gruissem, Professor of Plant Biotechnology at ETH Zurich. Working with several resistant and susceptible West African cassava cultivars, the team used time-consuming genome analyses to identify the gene responsible for a specific resistance to cassava mosaic virus.

The resistance was originally found by farmers in West Africa who observed that, while the majority of their cassava plants in the field had died as a result of the viral infection, a few plants survived. This attracted the attention of researchers, who then tried to identify the cause of this resistance.

In their study, published in Nature Communications in July, the team led by Wilhelm Gruissem show that the resistance is caused by a single gene that is the blueprint for a DNA polymerase – an enzyme responsible for replicating DNA within a cell. However, the DNA polymerase not only replicates DNA, it also performs “proofreading” to correct errors in the sequence of DNA building blocks that may occur during replication. And it is precisely this enzyme that the Geminiviruses require to replicate their own DNA and, consequently, to reproduce.

“We don’t know yet exactly how the resistance mechanism works,” Gruissem says. “This is something that will need to be investigated in future studies.” But he suspects that the mutations affect an area of the enzyme responsible for error correction during DNA replication. These changes could impact on the way the DNA polymerase works, causing it to fail to correct errors in the replicating viral DNA; these errors ultimately stop the virus from replicating and spreading in the plant.

By pinning down the gene responsible for what is known as CMD2 resistance, the researchers are playing an important part in enhancing food security in tropical and subtropical regions. The gene they have identified now serves as a genetic marker for breeders, indicating whether or not the resistance is present in their plants.