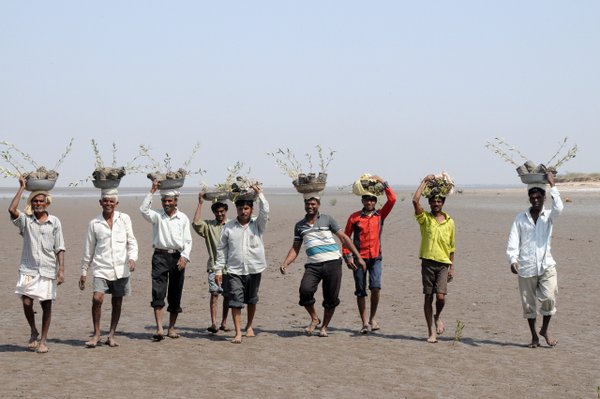 More than a decade ago, academics warned that mangrove forests were being lost faster than almost any other ecosystem, including coral reefs and tropical rainforests. But things are looking better.

Just a decade ago, scientists pointed out that mangrove forests are being lost faster than almost any other ecosystem, including coral reefs and tropical rainforests.

However, an international team of more than 20 researchers led by the National University of Singapore now sees reason for some optimism, as the global loss of mangrove forests is less alarming than previously thought. While the global loss rate was previously estimated at one to three per cent per year, their study now paints a different picture: Mangrove loss has fallen to between 0.3 and 0.6 per cent per year over the last 20 years.

Two scientists from the German Leibniz Centre for Tropical Marine Research (ZMT) in Bremen, biogeo-chemist Dr Tim Jennerjahn and mangrove ecologist Guilherme Abuchahla, also contributed to the study, which was published in the journal Current Biology in February 2020.

Mangrove forests occur along the coasts of more than 100 countries and are of great importance for humans and the adjacent ecosystems. They offer protection against coastal erosion and storms, act as filters to trap environmental toxins and sediment, bind large amounts of carbon dioxide, serve as nurseries for countless species of fish and shrimp, and provide millions of people with firewood, building materials and food.

These ecosystem services have only become apparent through appropriate research in the last two decades, which has led to greater public and government awareness of their value and to more investment and protection measures. In particular, the role of mangrove forests in the carbon cycle and the consequences of the 2004 tsunami have brought more attention to mangroves.

"In Senegal, for example, the Casamance and Sine-Saloum regions have been reforested with around 79 million mangrove trees," explains Guilherme Abuchahla. "The combined private and public initiative aims to protect the biodiversity of the areas as well as valuable farmland in the hinterland. It is expected that these mangroves will store thousands of tons of carbon over the next few years".

The protection of the mangroves in Brazil is also very successful. All mangrove forests - that is 1,400,000 square kilometres - have had the status of fully protected areas since 1965 and are located in 117 nature reserves along the country's coast. Technical developments in remote sensing now make it easier to detect area expansion, overexploitation and other disturbance factors.

Nevertheless, great efforts are needed to continue the positive trend. The research team found that the mangroves are still threatened by aquaculture, agriculture and urban development all over the world. A traditional focus of mangrove deforestation is Southeast Asia, where aquaculture facilities and rice paddies line extensive coastal areas.

We need more knowledge about where mangroves thrive

Worldwide, mangrove rehabilitation projects often fail because important ecological conditions are ignored. Mangroves, for example, are planted in locations that are exposed to strong currents or are unsuitable for other reasons. Often, less stress-resistant monocultures are planted or species are introduced that are not indigenous, become invasive and can lead to massive ecological problems.

"One example is the Philippines," says Guilherme Abuchahla, "In the early 2000s, most attempts to plant mangroves there on an area of 23,000 hectares failed. Hundreds of millions of seedlings were planted on tidal flats or in seagrass meadows. But these are habitats where mangroves do not thrive."

And yet: "Research on mangroves and knowledge gain have increased considerably in quality and quantity over the past two decades," comments Tim Jennerjahn of the ZMT. "This is associated with a sharpening of awareness in politics and society and gives us hope that these valuable ecosystems of the tropical coasts will be preserved for a long time to come.”