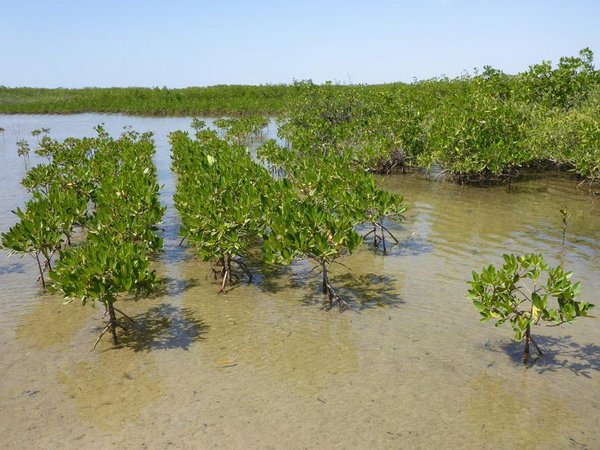 Mangrove experts of the International Union for Conservation of Nature (IUCN) warn against mass planting because important ecological prerequisites are not considered. They have presented their concerns in their Position Paper “Pause before you plant”.

Although global mangrove conservation and reforestation efforts have been partly successful and the world-wide mangrove loss rate has dropped from one to two per cent down to less than 0.2 per cent, IUCN researchers are wary of mass plantings of mangrove seedlings.

The IUCN Mangrove Specialist Group has now voiced its concerns in its Position Paper “Pause before you plant”, via which the international committee of experts is addressing decision-makers in politics, non-governmental organisations (NGOs) and the public at large.

The IUCN group comprises mangrove experts from across the world. Germany’s Professor Martin Zimmer, who heads the Mangrove Ecology Working Group at the Leibniz Centre for Tropical Marine Research (ZMT) in Bremen/Germany, belongs to the circle of researchers. In a press release from mid-December 2020, the scientist explained what had prompted him and his colleagues to publish the statement: “For some time, we in the IUCN Mangrove Specialist Group have been observing with concern a sort of doing things for the sake of doing things which often goes hand in hand with planting mangroves. Of course it should be welcomed that people are taking action to save the mangrove forests, but unfortunately, in the long run, many of these projects will not meet with success.”

The scientists believe that there are several reasons for setbacks. Often, projects aimed at restoring mangrove forests fail because, especially in the case of mass planting, important ecological prerequisites are not taken into account. For example, mangroves are planted on sites exposed to strong currents, so that the young seedlings which have not yet taken root are simply washed away.

“Mass planting campaigns may have a good media impact, but often, they focus on only one or two species which are easy to plant,” Zimmer explains. “Frequently, this results in stocks which do not render the desired ecosystem processes and services. Often, little stress-resistant monocultures or species are established which are not indigenous, become invasive and may result in ecological problems.”

“Pause before you plant”

With their Position Paper, the experts seek to rouse attention, but do not wish to nip restoration efforts in the bud. “That is by no means our intention,” Zimmer emphasises. The experts would simply like to see those engaging in reforestation to pause during the planning phase and consider how mangroves can be planted in a manner promising growth – hence the title of the Position Paper: ‘Pause before you plant’.

Countries such as Sri Lanka or Indonesia are making efforts to protect the remaining mangrove forests along their coasts. With mangrove loss having dropped world-wide, how come the warning voiced by the researchers, given such positive developments?

“Even if we are losing fewer mangroves than in the past, we are still talking about roughly 20,000 hectares a year,” says the German scientist, putting the figures into perspective. “Over the last 50 years, in total, more than a third of the world-wide mangrove stocks has either been logged or destroyed.”

So what is the experts’ advice? “We first of all recommend relying on the natural regeneration potential of the mangroves. If we can restore the original environmental conditions, the mangrove will be strong enough to spread again. Wherever this is not possible, or where particular ecosystem services are to be achieved, reforestation can represent a solution, but only under suitable ecological conditions.”

Mangrove forests play an important role for humans and animals. Mangroves capture large amounts of carbon dioxide and other climate gases. Researchers estimate that in total, between four and 20 million tonnes of carbon is stored in the tidal forests.
In addition to their contributing to combating global warming, mangroves are an important factor in coastal management, protecting the coasts from erosion by storm surges and providing a habitat for countless fish and crustacean species. Mangrove forests throughout the world continue to be threatened by aquaculture, agriculture and urban development.
(ZMT/wi)