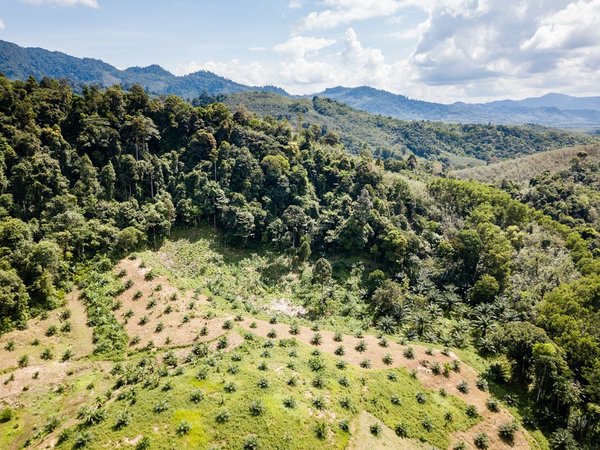 Oil palm plantations are destroying rainforests and their biodiversity – like here in Thailand.
Photo: Shutterstock/Richard Whitcombe

Is bioresource depletion to blame for corona infections?

Human impacts on biodiversity are increasingly being viewed as a possible cause of the current COVID-19 pandemic. The topic was addressed as part of a series of live interviews with experts on linkages between COVID-19 and climate change organised by the Global Landscapes Forum in April 2020.

“As climate change increases, we expect to see ecosystem shifts. We expect to see movements of some of the vectors that bring about pathogens and diseases, like ticks, mosquitos, etc.,” warns Inger Andersen, Executive Director of the United Nations Environment Programme (UNEP). “And of course, if the permafrost melts, then we could see the release of completely unknown viruses. It is in that setting that we need to think about climate change and viruses.”

Regarding the present corona crisis, Andersen maintains: “We have caused the virus by moving species into places where they don’t belong.” The role of land-use and human impacts on biodiversity in the emergence of global epidemics was among the topics discussed in a GLF Live event with leading experts on COVID-19 and climate change organised by the Global Landscapes Forum in April 2020.

A crisis just waiting to happen?

Kate Jones, a professor of ecology and biodiversity at University College London (UK), maintains that scientists had already been expecting a crisis like the corona pandemic to happen for many years, given the potential for the virus to jump to different species. “The world should have been slightly more prepared,” Jones said during the GLF Live event. “If anything, we’re lucky – this is a kind of trial run,” added Thomas Gillespie, associate professor of environmental sciences and environmental health at Emory University (Atlanta, USA).

Gillespie believes that while the frequently cited wet markets do represent a critical factor in the corona context because of the density and diversity of organisms they involve, the dominant issue is nonetheless that of choices in land-use. Activities such as deforestation are promoted that cause dramatic shifts in land-use in the tropics, involving systems that have the highest biodiversity in the world.

This is where many species live which are closely related to humans, such as primates. Half of the mammalian species in the world are rodents, and a quarter are bats. And in some tropical systems, half of the mammal species are bats. Both these groups of animals can play a key role in carrying diseases.

“It’s not that nature is attacking us – it’s that when we disturb these highly diverse systems, there are going to be unintended consequences,” Gillespie explained in the GLF Live event. “We’re going to alter the ecology of organisms, and they are going to try to find a way to survive. So they look for food, and that can lead to novel types of interaction and spill-over.”

“It’s about how we’re altering communities in forests, making systems simpler, favouring species which can survive better in the degraded landscapes,” Jones added. “Perhaps they invest less in immunity or have other special features. Therefore, our risk of getting something from them is higher.”

Both scientists stressed that the Sustainable Development Goals had contributed to the emergence of a broader view of relations between health and the environment. “Climate change is one small part of a big dynamic,” Gillespie noted. “The real issue is land-use change and the interface between humans and the natural world.”

A massive threat to food supplies

The impact that COVID-19 is having on global food supply systems was another issue discussed in the GLF Live event. Lawrence Haddad, executive director of the Global Alliance for Improved Nutrition (GAIN), said that GAIN offices in ten African and Asian countries had reported widespread closures of small and medium-sized enterprises in the food sector. Many food system workers had been laid off or were sick, and food shortages were developing in some places.

“As for what’s still to come, I’m deeply worried,” Haddad said in the GLF Live event. “If the GDP projections that we’re seeing in Europe happen in Africa and Asia, and I see no reason why they won’t, we’re looking at really massive numbers of people being plunged into two-dollars-a-day poverty. One estimate from the United Nations is 180 million, with about 150 million in South Asia and Sub-Saharan Africa, and typically, people living on under two dollars a day are hungry.” Haddad stressed that he was even more concerned about stunting, which could affect an additional 14 million children.

Haddad emphasises that it is essential to take action now to avert a major food crisis, and urges that existing food programmes be maintained. Self-distancing must be observed at food distribution points, where clustering can become a hazard, and also at physical food markets, which play a key role in food supply.

Haddad calls for big business support for small and medium-size enterprises, which form the backbone of the food system especially in Africa and Asia and represent vital links in value chains.

Other issues covered in the GLF Live event included the impact of COVID-19 on behavioural change, potential health consequences of the disease and how the private sector was responding to the pandemic.