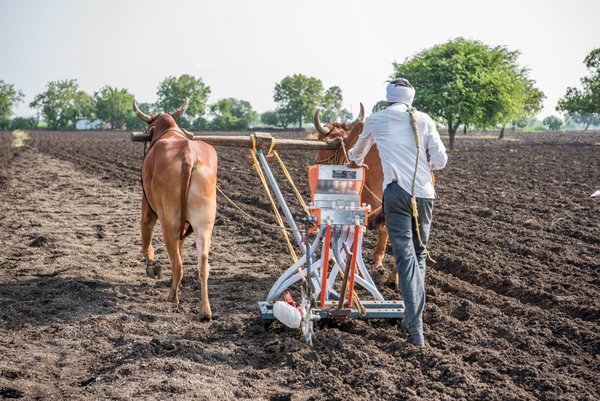 Farmer in Maharashtra, India, using a “seed-cum-fertiliser drill machine”. The increase in nitrous oxide in the atmosphere is primarily due to the use of fertiliser in agriculture.
Photo: Shutterstock, Tukaram Karve

The concentration of nitrous oxide– also known as “laughing gas” - in the atmosphere is rising sharply and driving climate change. After methane and CO2, it is the third most important greenhouse gas freed by human activities. Anthropogenic nitrous oxide emissions are primarily due to the use of fertiliser in agriculture.

Nitrous oxide (N2O) is around 300 times more damaging to the climate than carbon dioxide. Nitrous oxide remains in the atmosphere for some 120 years. Although present there only in trace amounts, its strong greenhouse impact means it is a disproportionate contributor to anthropogenic climate change.

The nitrous oxide concentration in the atmosphere is already some 20 per cent above its pre-industrial level. In recent decades, the increase has accelerated as a result of emissions from various human activities. Overall, global N2O emissions in 2016 were around 10 per cent higher than levels in the 1980s.

“The primary cause of the increase in nitrous oxide concentration in the atmosphere is the use of fertilisers containing nitrogen. These include both synthetic fertilisers and organic fertilisers from animal waste,” explains ecosystem researcher Almut Arneth, professor at the Institute of Meteorology and Climate Research - Atmospheric Environmental Research (IMK-IFU), Campus Alpin of the Karlsruhe Institute of Technology in Garmisch-Partenkirchen, Germany. She was a collaborator on the study. “In the period 2007 to 2016, agricultural production caused almost 70 per cent of anthropogenic global N2O emissions since the 1980s,” she adds.

As demand for food and fodder is continuing to grow worldwide, the researchers are concerned that the global atmospheric N2O concentration will also rise and contribute to global warming.

In Europe, by contrast, anthropogenic N2O emissions have declined in both agriculture and the chemical industry. The researchers attribute this to various incentive and protective measures. For example, agriculture in many western European nations has moved to more efficient use of nitrogen, among other reasons to reduce water pollution.

“Our work provides a deeper understanding of the N2O budget and its effects on the climate,” Arneth explains. “The study also shows that there are opportunities to reduce emissions, for example through various measures in agriculture affecting both production and consumption. Such measures benefit not only the climate but also biodiversity and human health,” she stresses.

In all, 57 researchers at 48 research institutes in 14 countries collaborated on the study “A comprehensive quantification of global nitrous oxide sources and sinks”, headed by Professor Hanqin Tian at Auburn University. It was carried out under the Global Carbon Project and the International Nitrogen Initiative.