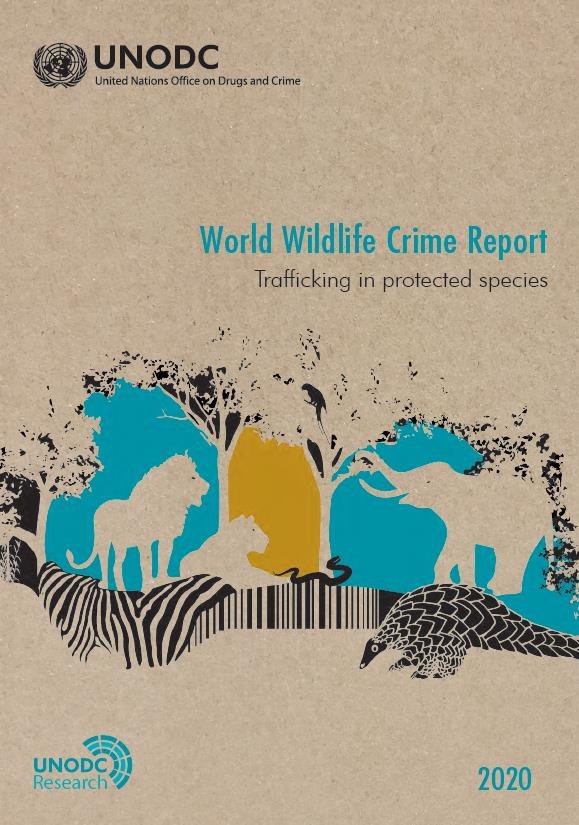 This report emphasises the threat that wildlife trafficking poses to nature and the biodiversity of the planet. The COVID-19 pandemic has shown that wildlife crime is a threat not only to the environment and biodiversity, but also to human health.

The 2020 World Wildlife Crime Report, launched by the United Nations Office on Drugs and Crime (UNODC) in July 2020, takes stock of the present wildlife crime situation with a focus on illicit trafficking of specific protected species of wild fauna and flora and provides a broad assessment of the nature and extent of the problem at the global level.

It includes a quantitative assessment of markets and trends and a series of in-depth case studies on illicit trade. While the first Report in 2016 was UNODC’s initial global assessment of the state of wildlife crime, this second edition is rather an evaluation of trends and changes.

The report highlights the trafficking of certain wild species - pangolins, birds, turtles, tigers, bears and many more. When wild animals are poached from their natural habitat, butchered and sold illegally, the potential for transmission of zoonotic diseases - those caused by pathogens that spread from animals to humans - is increased.

Zoonotic diseases represent up to 75 per cent of all emerging infectious diseases and include SARS-CoV-2 that caused the COVID-19 pandemic. The products offered from the trafficked species for human consumption, escape by definition any hygiene or sanitary control: as such, they pose even greater risks of infectious diseases. The report notes that pangolins, which were identified as a potential source of coronaviruses, are the most trafficked wild mammals in the world, with seizures of pangolin scales having increased tenfold between 2014 and 2018.

The report draws heavily on UNODC’s World WISE database, which contains almost 180,000 seizures from 149 countries and territories. The database shows that nearly 6,000 species have been seized between 1999-2019, including not only mammals but reptiles, corals, birds, and fish. It also shows that no single species is responsible for more than 5 per cent of the seizures, no single country was identified as the source of more than 9 per cent of the total number of seized shipments and that suspected traffickers of some 150 nationalities have been identified. This is why international cooperation and cross-border investigations are needed.

The authors point out that like many other markets, trade in wildlife and wildlife products has also expanded into the digital sphere. Sales of certain products, like live reptiles and tiger bone products, have shifted to online platforms and encrypted messaging apps as traffickers have found new ways to connect with potential buyers.