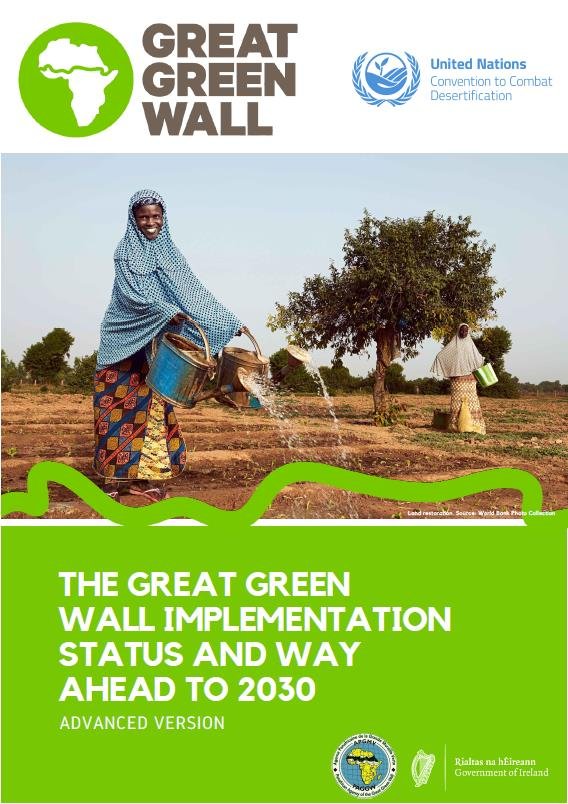 The Great Green Wall Implementation Status and Way Ahead to 2030

The Great Green Wall: Implementation Status and Way Ahead to 2030 report, a comprehensive status report of the Great Green Wall (GGW) was released in September 2020 to review achievements and agree on the next steps.

The report states that close to 20 million hectares of land were restored, over 350,000 jobs were created and around USD 90 million in revenues were generated from 2007 to 2018 through the GGW activities. The restored area will sequester over 300 Mt CO2 out to 2030, which would represent roughly 30 per cent of the envisioned target for the GGW.

On the socio-economic front, the USD 90 million generated, for instance, helped to reduce rural poverty and create close to 120 000 jobs in farm-related activities, including adding value to local products. Over 220,000 people received training on sustainable production of agro-pastoral and non-timber products, benefitting the shift more responsible consumption and production.

Combating recurrent droughts in the Sahel

The GGW initiative was conceived in 2007 in response to widespread land degradation and extreme poverty linked to recurrent and severe droughts in the Sahel. The Sahel is located on the southern edge of the Sahara Desert, stretching from the Atlantic Coast of West Africa to the Red Sea in the East.

The designed response– the Great Green Wall Initiative – was to restore degraded lands across a 15 km wide and nearly 8,000 km long area covering around 153 million hectares of the Sahel. This is the intervention zone demarcated specifically under the GGW. The Initiative is led by the African Union.

The key challenges the countries faced include financing, raising awareness about the initiative globally, scaling up the projects, coordinating fundraising and improving the governance, institutions and monitoring mechanisms.

Data for The Great Green Wall: Implementation Status and Way Ahead to 2030 was gathered by the national GGW agencies in the eleven countries, under the leadership of the Pan African Agency for the Great Green Wall. Donors, technical and financial partners as well as non-governmental organisations provided additional data and information.