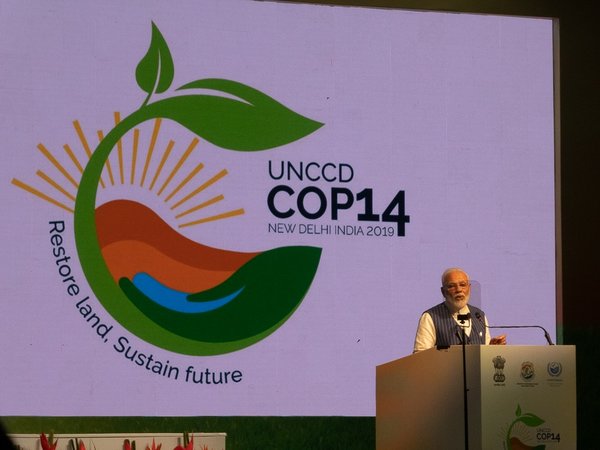 For ten days, the participants in COP14 of the UNCCD discussed a wide range of topics and finally established them in 36 formal decisions. These included decisions on the role of women and the significance of land rights regarding sustainable farm management, on monitoring and combating droughts, on migration and on close collaboration with the other two environmental conventions addressing climate (UNFCCC) and biodiversity (CBD).

On the 13th September 2019, the 14th Conference of the Parties (COP) of the United Nations Conference to Combat Desertification (UNCCD) drew to a close in New Delhi, India. It was an event of superlatives for the UNCCD: nearly 9,000 participants, 170 stakeholder meetings, 44 exhibitors and 126 fringe events.

While the UNCCD is still nowhere near as visible as its sister conventions, the United Nations Framework Convention on Climate Change (UNFCCC) and the Convention on Biological Diversity (CBD), it has made significant gains in dynamics and the attention it receives. This is above all for two closely interrelating reasons.

First, its focus within its mandate has shifted over the last few years from the special problems of the poor developing countries to topics that are also of growing interest to industrialised countries and emerging economies, and at global level. For example, the UNCCD has become the UN watchdog organisation for Sustainable Development Target 15.3, which states that by 2030, world-wide, for every single country and every ecosystem, land degradation neutrality is to be achieved, which means that the area of land with predominantly negative ecological changes must not be bigger than of that with positive changes.

This is measured with three lead indicators (vegetation cover, land productivity and soil carbon) and a range of further indicators, and reported and “monitored” by the UNCCD. A total of 120 countries have already submitted voluntary action plans for this process.

The second important pillar of the UNCCD, which has made particular progress at this COP, is the topic of drought. For food security, disaster relief, climate change, management of natural resources, energy and other sectors, drought resilience is becoming an increasingly important cross-sector topic, and wealthy countries of the Global North are being more and more affected as well. Thus, here too, willingness to cooperate at international level is growing.

Close integration with the topics of the sister conventions

The second reason for the stronger role that the UNCCD is playing is the close intermeshing of its “mandate topics” with the topics of its sister organisations. Land degradation and drought are perceived mainly at local and national level, and this is also where they need to be tackled. In contrast, regarding climate and biodiversity, international cooperation is virtually imperative, for the effects of a lack of sustainability at national level do not stop at the frontier and joining the bandwagon (benefiting from the efforts of others without doing anything oneself) is easy.

However, it is becoming increasingly clear that local land-based activities are indispensable in achieving the global climate and biodiversity goals, and that these must not clash too much with the interests of the local population if they are to be reached.

In addition, droughts are increasing as climate change progresses, and they are becoming one of the most important challenges regarding the topic of climate adaptation and compensation. They can do enormous damage to land-based activities and even nullify their results, and via the economy and migration, they can have cross-frontier impacts. Thus the UNCCD mandate topics intermingle with the other conventions and hence garner broader international attention.

UNCCD activities are changing in accordance with this melange as well. Learning together and communicating experiences continues to be an important field of activity. Sustainable land management, so far above all in the context of the WOCAT (World Overview of Conservation Approaches and Technologies) network, is now being joined by a toolbox and sharing of information on drought management, from early identification through vulnerability assessments of ecosystems and the population to building resilience.

There is still a lot to do in these two fields, and modern information and communication technologies can be a big help in both of them. For example, at COP14, India offered to assist other countries with its advanced remote sensing technologies. Another aim is to increasingly apply the important means used in combating global warming in land-based conservation of natural resources, generating co-effects. Whereas earlier experiences, in particular the REDD+ (Reducing Emissions from Deforestation and Forest Degradation) programmes, have not been particularly successful, future programmes can learn from this.

Combining the potentials to combat global warming in forests, trees, soil, pastures and arable land with the needs of biodiversity, biotope and soil conservation requirements while not only respecting the needs of people whose lives and survival depend on these resources but also enabling them to benefit from them as much as possible, thus turning them into drivers of changes, will be crucial. This follows from the assessment that most natural resources on this increasingly densely populated planet can only be protected through sustainable use, and that most (arable and pasture) land is owned privately (individually or collectively) rather than being a public resource like many forests.

Regarding drought resilience, too, people have to be directly enabled to help themselves whenever possible rather than being made dependent on relief measures. Here, collaboration with the UNCCD could help make such programmes more balanced and hence more successful, for this convention refers most explicitly to ecological and socio-economic targets being on a par in its constitution.