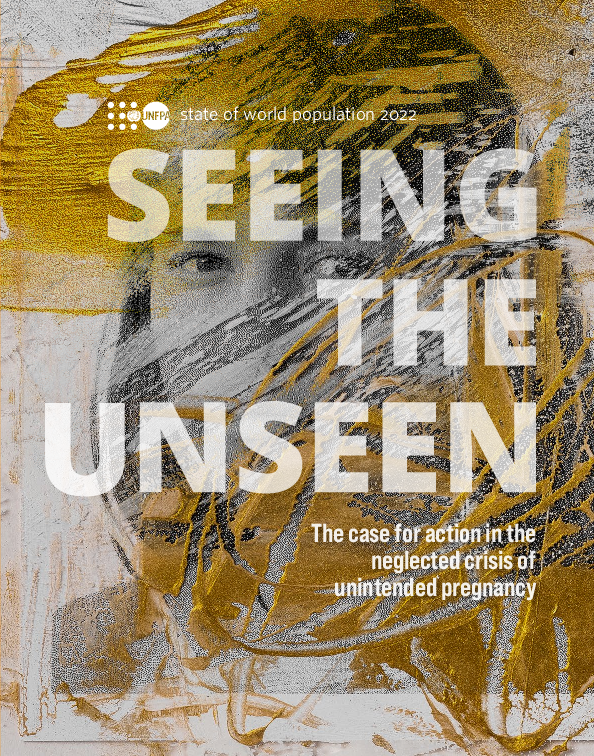 The report sheds light on the millions of women facing unintended pregnancies, and expects that conflicts and crisis are making the situation worse. This human rights crisis has profound consequences for societies, women and girls, and global health.

This year’s edition of the State of World Population Report, published by the United Nations sexual and reproductive health agency UNFPA in late March 2022, is entitled Seeing the Unseen: The case for action in the neglected crisis of unintended pregnancy.

Nearly half of all pregnancies, totalling 121 million each year throughout the world, are unintended, the report states. For the women and girls affected, the most life-altering reproductive choice—whether or not to become pregnant—is no choice at all.

Over 60 per cent of unintended pregnancies end in abortion and an estimated 45 per cent of all abortions are unsafe, causing 5 – 13 per cent of all maternal deaths, thereby having a major impact on the world’s ability to reach the Sustainable Development Goals.

The war in Ukraine and other conflicts and crises around the world are expected to drive an increase in unintended pregnancies, as access to contraception is disrupted and sexual violence increases.

Globally, an estimated 257 million women who want to avoid pregnancy are not using safe, modern methods of contraception, and where data is available, nearly a quarter of all women are not able to say no to sex. A range of other key factors also contributes to unintended pregnancies, including:

All of these factors reflect the pressure societies place on women and girls to become mothers. An unintended pregnancy is not necessarily a personal failure and may be due to the lack of autonomy society allows or the value placed on women’s lives.

Crisis and conflict rob women of their agency at all levels, drastically increasing the risk of unintended pregnancy at the moment it is most threatening. Women often lose access to contraceptives and sexual violence increases, with some studies showing that over 20 per cent of refugee women and girls will face sexual violence.

In Afghanistan, war and disruptions to health systems are expected to lead to an estimated 4.8 million unintended pregnancies by 2025, which will jeopardise the country’s overall stability, peace, and recovery.