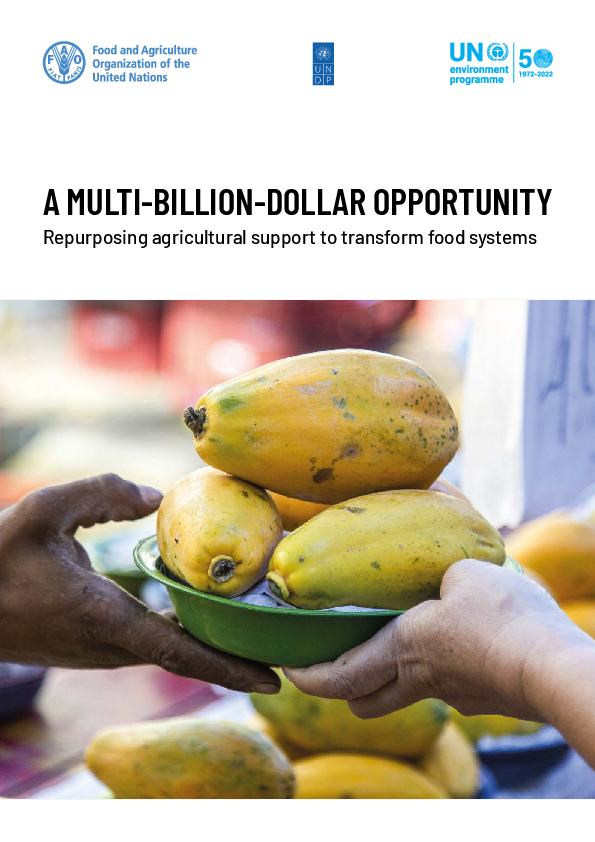 This report calls for rethinking agricultural support schemes and repurposing damaging incentives to achieve more of the 2030 Sustainable Development Goals and realise the UN Decade of Ecosystem Restoration.

Global support to producers in the agricultural sector amounts to USD 540 billion per year, making up 15 per cent of total agricultural production value. By 2030, this is projected to soar up more than threefold, to USD 1.759 trillion.

Yet 87 per cent of this support, approximately USD 470 billion, is price distorting and environmentally and socially harmful, according to the report A multi-billion-dollar opportunity: Repurposing agricultural support to transform food systems, launched by the Food and Agriculture Organization (FAO), the UN Development Programme (UNDP) and the UN Environment Programme (UNEP) in September 2021.

Current support to producers mostly consists of price incentives, such as import tariffs and export subsidies, as well as fiscal subsidies which are tied to the production of a specific commodity or input. These are inefficient, distort food prices, hurt people's health, degrade the environment and are often inequitable, putting big agri-business ahead of smallholder farmers, a large share of whom are women, the report states.

Continuing with support-as-usual will worsen the triple planetary crisis and ultimately harm human well-being. Meeting the goals of the Paris Agreement requires shifting support especially in high-income countries for an outsized meat and dairy industry, which accounts for 14.5 per cent of global greenhouse gas emissions. In lower-income countries, governments should consider repurposing their support for toxic pesticides and fertilisers or the growth of monocultures.

The report highlights cases where such a process began: the Indian state of Andhra Pradesh that adopted a policy of Zero Budget Natural Farming; the 2006 reform of agricultural policies in China that supports decreased use of mineral fertilisers and chemical pesticides; the Single Payment Scheme in the United Kingdom that removed subsidies in agreement with the National Farmers' Union; the European Union, where crop diversification has been incentivised through reform of the Common Agricultural Policy (CAP) and the Senegalese programme PRACAS to incentivise farmers to cultivate more diverse crops.

Although there is no one-size-fits-all strategy for repurposing agricultural producer support, the report recommends a broad six-step approach for governments: Measuring the support provided; Understanding its positive and negative impacts; Identifying repurposing options; Forecasting their impacts; Refining the proposed strategy and detailing its implementation plan; Monitoring the implemented strategy.