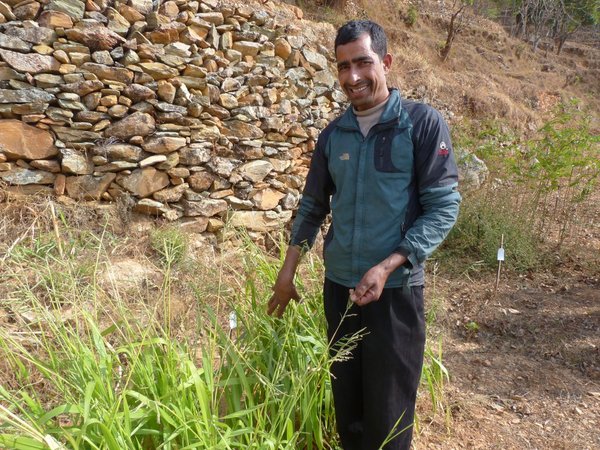 Ghanashyam Bastola is a Local Agriculture Resource Person (LARP) from Betini, Siddhicharan municipality. He is specialised in goat raising and is supporting agricultural services within the municipality.
Photo: ©Helvetas

Promoting a multi-stakeholder approach to agricultural services in Nepal

Who do farmers in rural Nepal turn to for advice and services such as agricultural inputs, machinery or loans? The answer, if they are given a choice, is not one single entity, but a variety of actors, depending on the specific need

This fact was recognised by the Nepal Agricultural Services Development Program (NASDP), or Prayas by its Nepali name. A bilateral project of the Swiss Agency for Cooperation and Development (SDC) and the Nepal government, this project operated over 2016- 2020, covering 61 municipalities in provinces 1, 3 (Bagmati) and 6 (Karnali), with technical support from the Swiss NGO Helvetas.

The project period coincided with the introduction of a radically new political and administrative structure across Nepal: federalisation. From a previous system of 75 (eventually 77) districts under the national government, federalisation brought into being seven provinces and 753 municipalities as well as the federal government.

The municipalities are devolved structures with elected and administrative officials who have power to enact laws, prepare and endorse plans and budgets, and mobilise their own resources. Responsibility for agricultural extension services is held exclusively by municipalities. This provided an opportunity to re-think the way that such services are organised and promoted.

It was important for Prayas staff to gain the trust and understanding of elected municipal representatives who, at first, gave agriculture relatively little priority in their planning and policy making. However, through discussions and workshops facilitated by members of the Prayas team, municipal elects and staff started to give more attention to agriculture. They further realised that, instead of organizing extension services entirely by themselves with a small technical staff, it would be better to set up an enabling local environment for multiple actors to operate.

This was quite a radically different approach. So far, district-based agricultural and livestock extension had tended to focus on advice and heavy subsidies for machinery and improved breeding animals to a few privileged farmers, usually located not far from the district headquarters.

A multi-stakeholder approach to agricultural services

Out in the municipalities, technical staff were certainly needed – but other players could also support agricultural services. They included farmer groups, returnee migrants, trained Local Agricultural Resource Persons (LARPs) and Agro-Vets (suppliers of agricultural inputs and basic veterinary medicines), agricultural cooperatives, local credit bodies, transport providers and various other private sector entities. LARPs, who are members of the local community, have often proven to be particularly successful in spreading new agricultural techniques and approaches, as illustrated by this comment of a municipal chairperson.

“Like other municipalities, in the initial years we also faced the challenge of limited human resources in the agriculture sector. The challenge for us was even bigger due to our geographical area and the scattered nature of settlements. When we were looking for solutions, the Prayas team dived in and suggested that we identify and utilise our lead farmers who are experienced in the sector and who have received 51 days of village agriculture workers training or 35 days of village animal health workers training. We consulted within our committees and sections and thought that this would be a good idea. We identified 79 such farmers, developed a roster, conducted an assessment, and selected 45 as Local Agriculture Resource Persons (LARPs). We deployed them by providing remuneration. In this process, we also faced hurdles such as preparing guidelines for the LARPs, and a designated work model for them to follow. In this, also, the Prayas team guided us, and today we have a good mechanism in place.”
Nishanta Sharma, Chairperson, Chisankugadi municipality

One aspect stressed by Prayas when promoting a multi-stakeholder approach to agricultural services is the importance of inclusivity. That is, not only working with well-to-do farmers, but also meeting the needs of resource poor, socially disadvantaged farmers – especially women. Municipalities have been encouraged to identify women and individuals representing the different local ethnic and caste communities as LARPs and AgroVets.

They are also moving away from the concept of subsidies to a more mixed approach of organising appropriate trainings, linking producers to credit institutions, supporting agricultural cooperatives, and, where necessary (as during the lockdown due to the Covid pandemic), organising transport for produce from farm to market.

In the municipalities in which it operated, Prayas has set in motion a significant mind-set change amongst municipal staff and farmers alike. Although the project has now phased out, the network of diverse service providers is likely to continue and grow in future thanks to this changed mind-set.