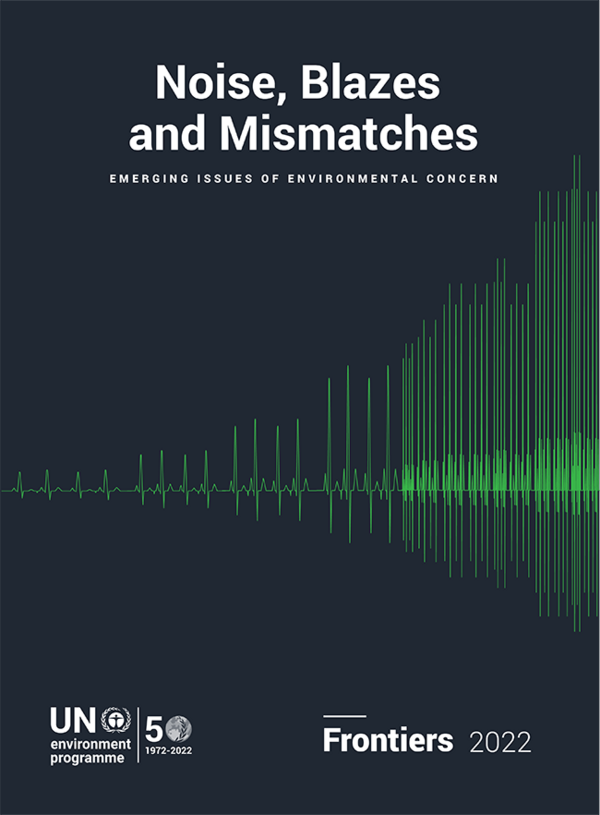 The fourth edition of the Frontiers Report published by the United Nations Environment Programme (UNEP) in February 2022, is entitled Noise, Blazes and Mismatches: Emerging Issues of Environmental Concern.

Wildfires are burning more severely and more often, urban noise pollution is growing into a global public health menace, and phenological mismatches – disruptions in the timing of life-cycle stages in natural systems – are causing ecological consequences.

These three topics covered in the report highlight the urgent need to address the triple planetary crisis of climate change, pollution and biodiversity loss. The report identifies these environmental issues and offers solutions.

Dangerous wildfire weather is projected to get worse

Each year between 2002 and 2016, an average of about 423 million hectares or 4.23 million square km of the Earth’s land surface burned, becoming more common in mixed forest and savannah ecosystems. An estimated 67 per cent of the annual global area burned by all types of fires was on the African continent.

Due to climate change, dangerous wildfire weather conditions are projected to become more frequent and intense and to last longer, including in areas previously unaffected by fires, according to the report. Land-use change and the aggressive suppression of natural fire are further risk factors for the proliferation of wildfire. Changes in fire regimes are expected to lead to massive biodiversity loss, endangering over 4,400 terrestrial and freshwater species.

Wildfires generate black carbon and other pollutants that threatens human health, can pollute water sources, enhance the melting of glaciers, cause landslides and large-scale algal blooms in oceans, and turn carbon sinks such as rainforests into carbon sources.

Phenological shifts in crops may be challenging for food production

Phenology is the timing, driven by environmental forces, of recurring life cycle stages, and how, within an ecosystem, interacting species respond to the changing conditions. Phenological shifts occur when species shift the timing of life cycle stages in response to changing environmental conditions altered by climate change. The concern is that interacting species in an ecosystem do not always shift the timing in the same direction or at the same rate.

These phenological shifts are increasingly disturbed by climate change, pushing plants and animals out of sync with their natural rhythms and leading to mismatches, such as when plants shift life cycle stages faster than herbivores.

Phenological shifts in crops in response to seasonal variations will be challenging for food production in the face of climate change.  Shifts in the phenology of commercially important marine species and their prey have significant consequences for stock and fisheries productivity.