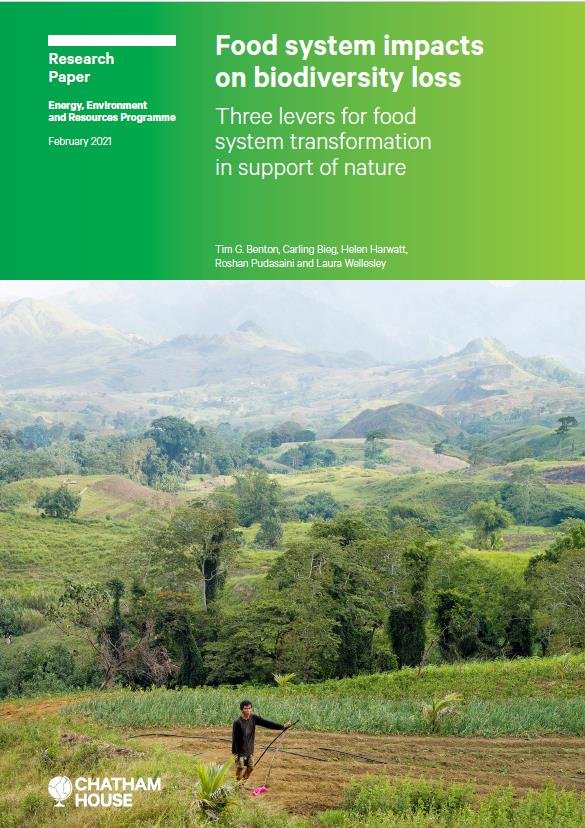 Biodiversity loss will continue to accelerate unless we change the way we produce food, states this report, calling for an urgent reform of food systems.

The global food system is the primary driver of biodiversity loss, according to the report Food System Impacts on Biodiversity Loss published by Chatham House in February 2021. The report is supported by the UN Environment Programme (UNEP) and Compassion in World Farming. It describes three actions needed for food system transformation in support of biodiversity, and sets out recommendations to embed food system reform in high-level political events over the coming UN ‘Super Year’ for Nature.

While the global food system is the primary driver of biodiversity loss, agriculture alone is the identified threat to 24,000 of the 28,000 (86 per cent) species at risk of extinction. The global rate of species extinction today is higher than the average rate over the past 10 million years.

In the last decades, our food systems have been following the “cheaper food paradigm”, with a goal of producing more food at lower costs through increasing inputs such as fertilizers, pesticides, energy, land and water. This paradigm leads to a vicious circle: the lower cost of food production creates a bigger demand for food that must also be produced at a lower cost through greater intensification and further land clearance.

The impacts of producing more food at a lower cost are not limited to biodiversity loss. The global food system is a major driver of climate change, accounting for around 30 per cent of total human-produced emissions.

According to the new report, a reform of food systems is a matter of urgency and should focus on three interdependent actions:

Dietary change is necessary to enable land to be returned to nature, and to allow widespread adoption of nature-friendly farming without increasing the pressure to convert natural land to agriculture. The more the first action is taken up in the form of dietary change, the more scope there is for the second and third actions.