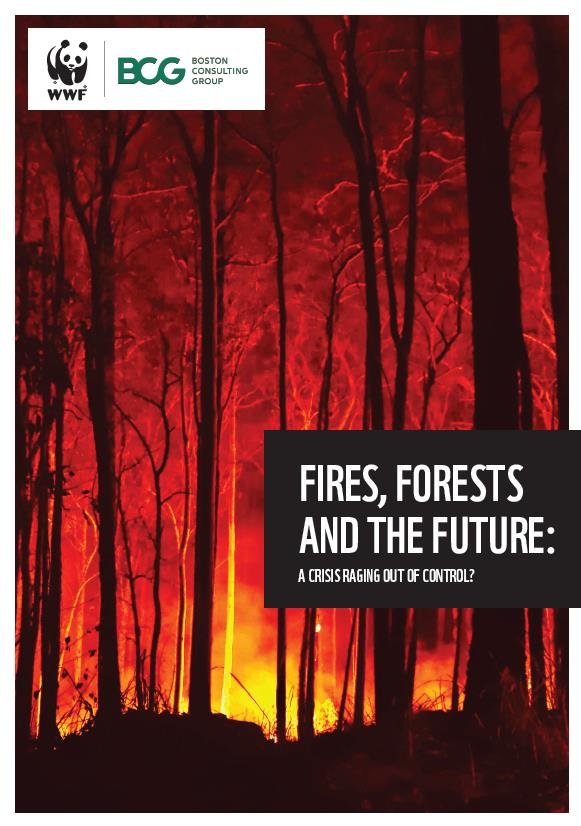 Fires, forests and the future

This report sheds a light on wildfires across the globe. Climate change and wildfires mutually reinforce each other, and the fires burning today in many parts of the world are bigger, more intense and last longer than they used to, the authors write.

Fire seasons are getting longer, and extreme forest fires are becoming more common. 2020 could see even more wildfires than last year, already a record year for fires, warns the report Fires, forests and the future: A crisis raging out of control? published by  the Worldwide Fund for Nature WWF and Boston Consulting Group (BCG) in late August 2020.

Deforestation is one of the leading causes of fires in the Amazon and many tropical and sub-tropical countries. Expansion of agriculture, tree plantations and illegal and unsustainable logging continue to drive conversion and degradation of natural habitats, thereby increasing the risk of fires.

The latest fire seasons have been raging with unprecedented ferocity, from the Amazon to the Arctic. In April this year, the number of fire alerts across the globe was up by 13 per cent compared to last year, which was already a record year for fires. The main drivers are persistent hotter and drier weather due to climate change and deforestation caused primarily by land conversion for agriculture.

If current trends continue, there will be devastating long-term consequences due to the release of millions of extra tonnes of carbon, and fires will decimate biodiversity, destroy vital ecosystems, impact economies, threaten property and livelihoods, and cause severe long-term health problems for millions around the world.

The very significant consequences of these fires provide even more reason for all governments to raise their ambition on climate-change action in their national climate and emission-reduction plans (called Nationally Determined Contributions, NDCs), the authors say. Countries have the opportunity to do this in 2020 when they are due to submit revised, ambitious NDCs to the UN.

Read more and download the report Fires, forests and the future: A crisis raging out of control? at WWF website